Amazon’s Green New Headquarters Is Actually Not Sustainable. Scott and scott architects complete 'saanich farmhouse' in canada. These houses by conceptos plásticos are built with blocks made from waste plastic. Kenyan woman’s startup recycles plastic into bricks that are stronger than concrete. No Footprint House is a prototype prefabricated home in Costa Rica. Slanted wooden louvres offer natural light and cross-ventilation in the prefabricated house in Costa Rica, which architecture studio A-01 created as a prototype for a series of future zero-carbon homes. 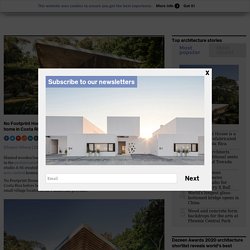 No Footprint House was prefabricated in the Central Valley of Costa Rica before being transported to its site in Ojochal, a small village located in the Puntarenas province. Unused rooftop space transformed into stunning sustainable farm. The Thammasat University Rooftop Farm (or TURF), by Landprocess, puts an abandoned rooftop area belonging to Thammasat University's Rangsit Campus to fine use as an organic farm. 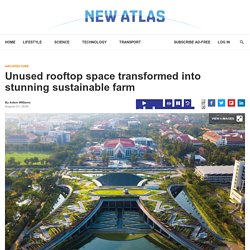 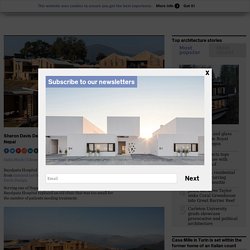 Serving one of Nepal's poorest and most remote regions, Bayalpata Hospital replaced an old clinic that was too small for the number of patients needing treatment. Five medical buildings and an administrative block form the campus on a hilltop in the Seti River Valley. The gabled forms surround shady courtyards for patients to sit in while waiting to receive healthcare.

The development also includes 10 houses and an eight-bed dormitory for hospital staff to live in. New York-based Sharon Davis Design worked with non-governmental organisation Possible Health and the Nepalese government on the project, which aims to increase access to affordable healthcare in the area. In Nepal, 45 per cent of the population lives below the poverty line, according to the World Health Organisation (WHO). New research is finding ways to turn cells into mini-factories for materials. Buildings are not unlike a human body. 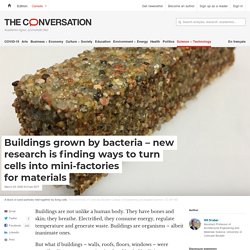 They have bones and skin; they breathe. Electrified, they consume energy, regulate temperature and generate waste. Buildings are organisms – albeit inanimate ones. But what if buildings – walls, roofs, floors, windows – were actually alive – grown, maintained and healed by living materials? Imagine architects using genetic tools that encode the architecture of a building right into the DNA of organisms, which then grow buildings that self-repair, interact with their inhabitants and adapt to the environment.

Living architecture is moving from the realm of science fiction into the laboratory as interdisciplinary teams of researchers turn living cells into microscopic factories. Hemp is used on the inside and out of Cambridgeshire's Flat House. Practice Architecture worked alongside hemp farmers to erect this zero carbon home in Cambridgeshire, England, from pre-fabricated panels in just two days. 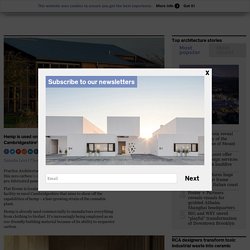 Flat House is located on Margent Farm, a 53-acre farming facility in rural Cambridgeshire that aims to show off the capabilities of hemp – a fast-growing strain of the cannabis plant. Hemp is already used commercially to manufacture everything from clothing to biofuel. Architecture grad makes affordable homes from Hawaii's invasive trees.

University of Hawaii architect graduate Joey Valenti has designed prefabricated and low-cost housing units made entirely from invasive albizia trees on the island of Oahu. 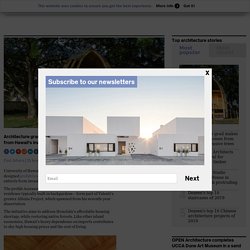 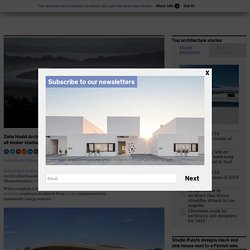 When complete it aims to be the world's greenest football stadium, constructed entirely from timber and powered by sustainable energy sources. Henning Larsen tops Danish sewage works with park. A green roof with meandering pathways disguises this weathering steel water treatment facility, which Henning Larsen has completed on the island of Zealand, Denmark. 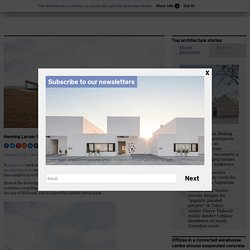 Named the Solrødgård Water Treatment Plant, the building contains a recycling centre and wastewater treatment plant for the city of Hillerød, and is topped by a public urban park. Henning Larsen designed the rooftop park to reduce the facility's visual impact and invite the community to visit. MVRDV plans 'green villa', an office + residential building covered in plants in the netherlands. MVRDV has designed green villa, a four-story office and residential building whose entire exterior is covered in a variety of pots and plants standing on a gridded ‘rack’ system. located on a corner lot next to the dommel river in the dutch village of sint-michielsgestel, the building adopts the urban form of neighboring structures, while its plant-covered façade helps it blend into the bucolic landscape of the nearby river, fields and trees. all images © MVRDV MVRDV has designed the green villa together with co-architect van boven architecten, who is also the project’s developer and initiator. construction is scheduled to start in 2020, with plans to create a landmark building while also being socially conscious and environmentally progressive. 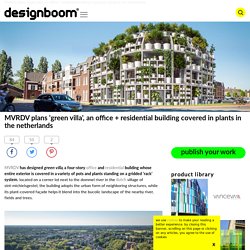 ‘this design is a continuation of our research into “façade-less” buildings and radical greening’, explains winy maas, founding partner of MVRDV. Project info: This Airport Is the First in the U.S. to Be Fully Solar-Powered. The airport of the future is here, and it’s in Chattanooga, Tennessee. 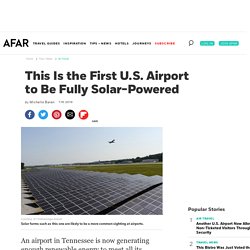 The Chattanooga Metropolitan Airport has become the first airport in the country to generate all the power it needs through a solar farm that was completed last month, something we could start seeing more of at airports across the country and throughout the world. The airport’s 12-acre, 2.64-megawatt solar installation, consisting of 10,000 panels, was made possible by U.S. Federal Aviation Administration grants aimed at helping airports improve their air quality and reduce emissions.

This experimental, carbon-neutral house is made almost entirely out of cork. 11 Modern Rammed-Earth Homes. This Hurricane Proof House Made From 612,000 Recycled Plastic Bottles Can Withstand 326 MPH Winds. Scientists turn wood into a material that reflects heat, is as strong as steel. A team of scientists from across the United States has figured out a way to process wood into a material that’s light and strong, and that has remarkable properties when it comes to reflecting heat.

The experiment offers the potential of creating buildings that do such a good job of passive cooling that energy costs will be cut in half. With buildings already consuming 70% of electricity in the United States, and the climate crisis only increasing the demand for air conditioning, the potential impact of a better way to keep buildings cool is tremendous.