India's economy grows faster than expected. 29 November 2013Last updated at 07:27 ET A slowdown in key sectors such as manufacturing has hurt India's growth rate India's economic growth rate picked up strongly in the second quarter, according to official figures. The economy expanded at an annual rate of 4.8% in the July-to-September period, up from 4.4% in the previous quarter. The acceleration was faster than analysts had been expecting. Asia's third-largest economy has been weighed down by various factors, such as high inflation, a weak currency and a drop in foreign investment. This is the fourth quarter in a row that India's annual growth rate has been below the 5% mark, and the previous quarter's rate of 4.4% was the lowest for four years. Earlier this year, the Indian prime minister's economic advisory council lowered the growth outlook for the current financial year. 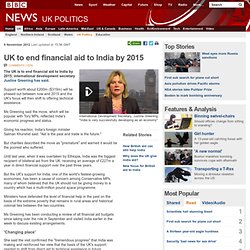 Support worth about £200m ($319m) will be phased out between now and 2015 and the UK's focus will then shift to offering technical assistance. Ms Greening said the move, which will be popular with Tory MPs, reflected India's economic progress and status. We pay for India's rocket to Mars. India is launching a mission to Mars as it continues to receive gift aid from Great Britain [] The £50million project aims to put an unmanned spacecraft into orbit around the red planet next year. 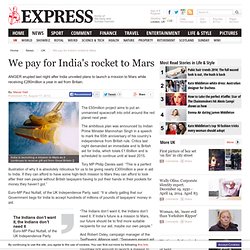 The ambitious plan was announced by Indian Prime Minister Manmohan Singh in a speech to mark the 65th anniversary of his country’s ind­ependence from British rule. Critics last night demanded an immediate end to British aid for India, which totals £1.6billion and is scheduled to continue until at least 2015. Tory MP Philip Davies said: “This is a perfect illust­ration of why it is absolutely ridiculous for us to be giving nearly £300million a year in aid to India. If they can afford to have some high-tech mission to Mars they can afford to look after their own people without British taxpayers having to put their hands in their pockets for money they haven’t got.” The Indians don’t want it, the Indians don’t need it Euro-MP Paul Nuttall, of the UK Independence Party A DFID spokesperson said: India's Low-Cost Mission To Mars : Parallels. Hide captionScientists and engineers work on the Mars Orbiter at the Indian Space Research Organisation's satellite center in Bangalore, India, on Sept. 11. 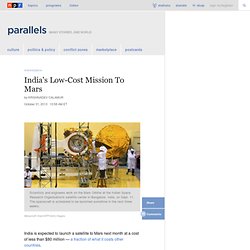 As K. Pride notwithstanding, the mission is somewhat controversial, as NPR's Julie McCarthy reported last year. One of the biggest critics is G. UK MPs censure DfID over decision to end aid to India and South Africa. The UK's decision to end bilateral aid to India and South Africa by 2015 was "neither methodical nor transparent, but related to short-term political pressures", a group of MPs has said. 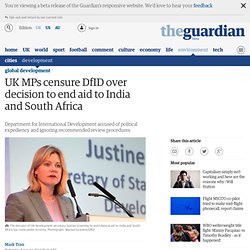 Justine Greening, the international development secretary, announced in November 2012 that Britain would end direct aid to India in 2015. Six months later, she said Britain's development programme in South Africa would also come to an end in 2015, a decision that drew a rebuke from the South African government. The move to phase out aid to these countries, defined by the World Bank as middle-income economies, followed a review by the Department for International Development (DfID) of its multilateral and bilateral aid programmes in 2010 that resulted in Britain curtailing its bilateral aid programmes to 27 out of 43 countries. 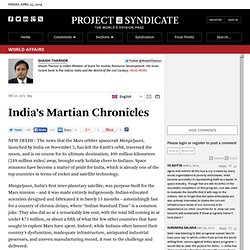 Click to hide this space NEW DELHI – The news that the Mars orbiter spacecraft Mangalyaan, launched by India on November 5, has left the Earth’s orbit, traversed the moon, and is on course for its ultimate destination, 400 million kilometers (249 million miles) away, brought early holiday cheer to Indians. Space missions have become a matter of pride for India, which is already one of the top countries in terms of rocket and satellite technology. Mangalyaan, India’s first inter-planetary satellite, was purpose-built for the Mars mission – and it was made entirely indigenously. Indian-educated scientists designed and fabricated it in barely 15 months – astonishingly fast for a country of chronic delays, where “Indian Standard Time” is a common joke. But it is too early to celebrate. Moreover, the challenge is even greater when it comes to Mars.

The ISRO’s chief scientist, K. Yet, unavoidably, some triumphalism has crept into the narrative. Kevin McCloud: Slumming It (2010) - Ep1 (Full)