Vertical farms grow veggies on site at restaurants and grocery stores. Last month we reported that a huge vertical farming operation near Copenhagen in Denmark recently completed its first harvest. 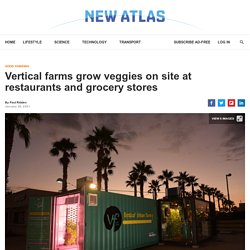 That setup uses hydroponics, but the veggies grown in Vertical Field urban farming pods take root in real soil. Traditional agricultural farming involves the use of a lot of land and resources to grow crops, and then even more resources to harvest and transport the goods – sometimes thousands of miles – to where consumers can get to them. Brooks: What belongs in your recycling bin? Not turtles, for a start. Turtles are not recyclable. 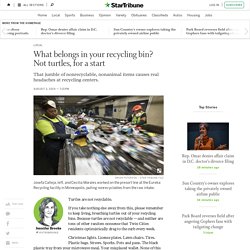 If you take nothing else away from this, please remember to keep living, breathing turtles out of your recycling bins. Because turtles are not recyclable — and neither are tons of other random nonsense that Twin Cities residents optimistically drag to the curb every week. Christmas lights. License plates. FAQs - Uncle Jim's Worm Farm. No, red worms do not have eyes. 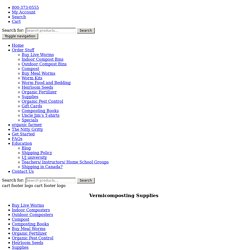 They are very sensitive to bright light. We Need This - Our plastic waste can be turned into homes... Labels - How2Recycle. Empty & Reattach Pump: This means before you recycle the bottle, make sure it's empty and reattach the pump. 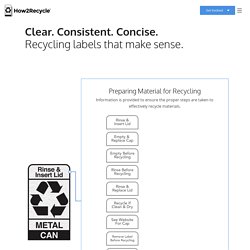 For this packaging, the pump is recyclable! Rinse & Insert Lid: Rinse your container out, and then stick the lid back inside the container. Recycle Styrofoam cups: Is it possible? If we can recycle Styrofoam cups, does that make these disposable products less of an environmental problem? Spotting a '6' in a triangle on the bottom of these cups, some might assume that Styrofoam can be tossed into the bin with other recyclable plastic packaging. This would, in theory, decrease the amount of Styrofoam that ends up in landfills, and possibly reduce demand for new Styrofoam.

The truth is, it's not that simple. Recycling - City of Minneapolis. Home > Solid Waste & Recycling > Recycling. 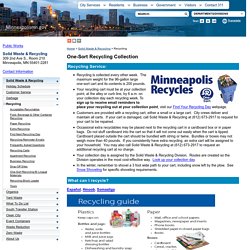 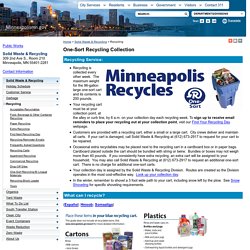 What is Ecosia? - The search engine that plants trees. Plastic Recycling Codes - Which Plastics Are Safe. In America, we generate 10.5 million tons of plastic waste per year with only 1-2% being recycled. 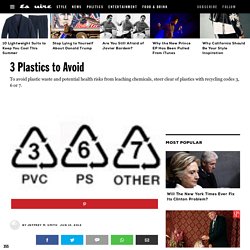 Ditching the synthetic material known as plastic is a tough endeavor for any American, even the greenest among us. In our everyday lives, it's everywhere. It's up to us to be vigilant about which plastic products we're choosing to use and which ones must be avoided due to potentially toxic effects that can have serious consequences for our health. One trick you can use to figure out which plastics to avoid is to decode the recycling symbols and knowing what those numbers inside the triangular recycling code mean.

Here are three to avoid: Recycling 101: Can I Recycle That Straw? We all know the drill: Reduce, reuse, recycle. 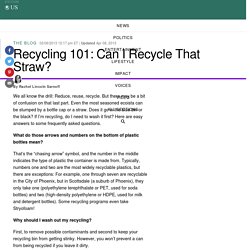 But there may be a bit of confusion on that last part. Even the most seasoned ecoista can be stumped by a bottle cap or a straw. 4Ocean. Made From Recycled Materials. The Swedish recycling revolution. Changing behaviours. Help the Environment- The Adventures of EcoRilla Episode 1 - EcoWater Canada. Animals Eat Ocean Plastic Because it Smells Like Food. As the oceans fill with plastic debris, hundreds of marine species eat astonishing amounts of it. 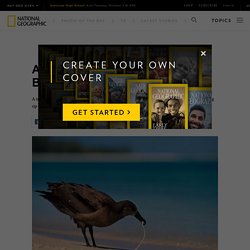 Yet the question of why so many species, from the tiniest zooplankton to whales, mistake so much of it for food has never been fully explored. Now a new study explains why: It smells like food. Algae are consumed by krill, a small crustacean that is the primary food source for many sea birds. As algae breaks down naturally in the ocean, they emit a stinky sulfur odor known as dimethyl sulfide (DMS).

Sea birds in the hunt for krill have learned that the sulfur odor will lead them to their feeding grounds. It turns out that floating plastic debris provides the perfect platform on which algae thrives. “DMS is the dinner bell,” says Matthew Savoca, a doctoral student at the University of California, Davis, and lead author of the study.

Recycle ▶ Get the Facts. How much do Americans throw away? 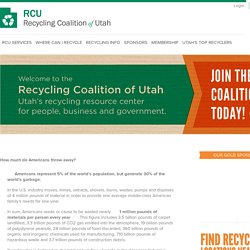 Americans represent 5% of the world’s population, but generate 30% of the world’s garbage. In the U.S. industry moves, mines, extracts, shovels, burns, wastes, pumps and disposes of 4 million pounds of material in order to provide one average middle-class American family’s needs for one year. In sum, Americans waste or cause to be wasted nearly 1 million pounds of materials per person every year. How Big Is the "Great Pacific Garbage Patch"? Science vs. Myth. UPDATED FEBRUARY 7, 2013 -- While everything may be bigger in Texas, some reports about the "Great Pacific Garbage Patch" would lead you to believe that this marine mass of plastic is bigger than Texas—maybe twice as big as the Lone Star State, or even twice as big as the continental U.S. For NOAA, a national science agency, separating science from science fiction about the Pacific garbage patch (and other "garbage patches") is important when answering people's questions about what it is and how we should deal with the problem.

This convergence zone is where warm water from the South Pacific meets up with cooler water from the Arctic. The zone acts like a highway that moves debris from one patch to another. Plastic-Eating Fungus. Plastic Eating Fungus. New Mushrooms Found That Eat Plastic! How to Construct Houses with Plastic Bottles !! The video shows the strength of a mud filled plastic bottle. Plastic Bottle Homes and Greenhouses. Homes made from Plastic Bottles + Greenhouses, too! Poem - Multi Genre Project over Recycling and Conservation. How Long Does Trash Last? Brief Description Student learn how long trash lasts in landfills in this cooperative activity.