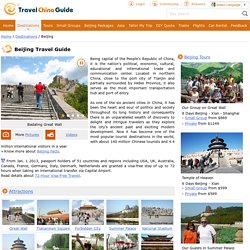 Located in northern China, close to the port city of Tianjin and partially surrounded by Hebei Province, it also serves as the most important transportation hub and port of entry. As one of the six ancient cities in China, it has been the heart and soul of politics and society throughout its long history and consequently there is an unparalleled wealth of discovery to delight and intrigue travelers as they explore the city's ancient past and exciting modern development.

Now it has become one of the most popular tourist destinations in the world, with about 140 million Chinese tourists and 4.4 million international visitors in a year. Know more about Beijing Facts. Karachi. Karachi (Sindhi: ڪراچي‎, Urdu: کراچی‎ / ALA-LC: Karācī IPA: [kəˈrɑːˌtʃi]) is the capital of the province of Sindh, as well as the largest and most populous metropolitan city of Pakistan. 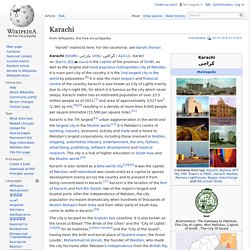 It is main port city of the country. It is the 2nd-largest city in the world by population.[8] It is also the main seaport and financial centre of the country. Karachi is also known as City of Lights mainly due to city's night life, for which it is famous as the city which never sleeps. Karachi metro has an estimated population of over 23.5 million people as of 2013,[1] and area of approximately 3,527 km2 (1,362 sq mi),[9][10] resulting in a density of more than 6,000 people per square kilometre (15,500 per square mile).[11] The city is located on the Arabian Sea coastline. History Founding and Early History Mughal Empire The village that later grew out of this settlement was known as Kolachi-jo-Goth (Village of Kolachi in Sindhi). British Raj Karachi Post-Independence Geography. 14 Reasons Why Living in Seoul, Korea is Awesome! - Seoulistic.

If you’re thinking about moving to Korea, you might just be making the best decision of your life! 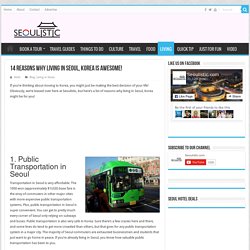 Here’s a few cultural and etiquette tips on How to Ride the Subway Like a Local! 2. Most major cities around the world have access to nature within city borders, and Seoul is no exception. The Han River is one of the best places to visit in Seoul. 3. Korea is not home to any 3-star Michelin restaurants, but that doesn’t mean the food isn’t good. Looking to fit in better? 4. Living in Korea, you’ll be spoiled by super fast internet speeds. If you’re traveling to Seoul, check out our post on 10,000 Free Wifi Hotspots in Seoul (with maps)! 5. 6. 7. Seoul. Fashion and technology-forward but also deeply traditional, this dynamic city mashes up temples, palaces, cutting-edge design and mountain trails, all to a nonstop K-Pop beat. 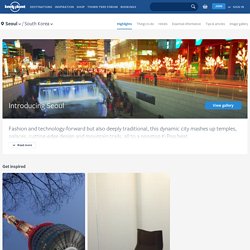 Historical Fragments Gaze down on this sprawling metropolis of around 10 million people from atop any of Seoul’s four guardian mountains and you’ll sense the powerful pungsu-jiri (feng shui) that has long nurtured and protected the city. History clings tenaciously to the ‘Miracle on the Han’, a phoenix arisen from the ashes of the Korean War just over 60 years ago. So while Seoul has its eye clearly on the future, you'll also encounter fascinating fragments of the past in World Heritage–listed sites such as Jongmyo shrine, the alleys between the graceful hanok (traditional wooden homes) that cluster in Bukchon, and striding along the magnificent city walls. Seoul: Wired Megacity Extends Reach with U-City Project. In the sprawling, densely populated capital city of South Korea, Lee Hye-young and her husband Kim Soon-kyo are nothing if not typical citizens. 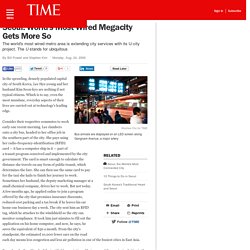 Which is to say, even the most mundane, everyday aspects of their lives are carried out at technology's leading edge. Consider their respective commutes to work early one recent morning. Lee clambers onto a city bus, headed to her office job in the southern part of the city. She pays using her radio-frequency-identification (RFID) card — it has a computer chip in it — part of a transit program conceived and implemented by the city government.

Seoul. Jakarta. One of the world’s greatest megalopolises, Jakarta is a dynamic city of daunting extremes that's developing at a pace that throws up challenges and surreal juxtapositions on every street corner. 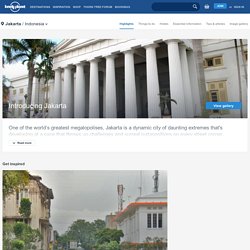 The Most Populated Cities of the World. World Megacities. This is a virtual travel to the world's most populous cities like New York, Tokyo, Shanghai, London, Hong Kong, Chicago, Buenos Aires, Bangkok, Seoul, Los Angeles, Mexico City and so on. 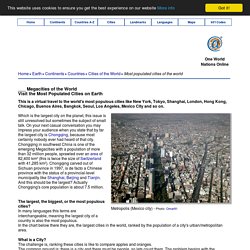 Metropolis (Mexico city) - Photo: Omar91 Which is the largest city on the planet, this issue is still unresolved but sometimes the subject of small talk. On your next casual conversation you may impress your audience when you state that by far the largest city is Chongqing, because most certainly nobody ever had heard of that city. Chongqing in southwest China is one of the emerging Megacities with a population of more than 32 million people, sprawled over an area of 82,400 km² (this is twice the size of Switzerland with 41,285 km²).