How to Succeed in a Massive Online Open Course (MOOC) by Apostolos Koutropoulos & Rebecca J. Hogue 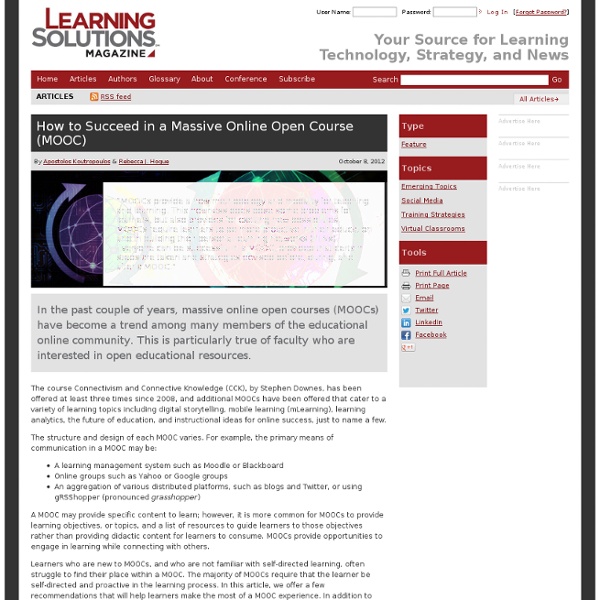 “MOOCs provide a new methodology and modality for teaching and learning. This newness does pose some problems for learners, but also provides for exciting new possibilities. MOOCs require learners to be more proactive in their education and in building their personal learning networks (PLNs). Everyone can be successful in a MOOC, provided that certain steps are taken and strategies devised before, during, and after a MOOC.” In the past couple of years, massive online open courses (MOOCs) have become a trend among many members of the educational online community. The course Connectivism and Connective Knowledge (CCK), by Stephen Downes, has been offered at least three times since 2008, and additional MOOCs have been offered that cater to a variety of learning topics including digital storytelling, mobile learning (mLearning), learning analytics, the future of education, and instructional ideas for online success, just to name a few. The structure and design of each MOOC varies. Questions Related:  moocs und wissenschaftl. theorien

What You Need to Know About MOOC's - Technology We'll be updating this page regularly.Please check back for updates. Call it the year of the mega-class. Colleges and professors have rushed to try a new form of online teaching known as MOOCs—short for "massive open online courses." The courses raise questions about the future of teaching, the value of a degree, and the effect technology will have on how colleges operate. Struggling to make sense of it all? On this page you’ll find highlights from The Chronicle's coverage of MOOCs. If you'd like to learn more about MOOCs in a condensed format, try reading "Beyond the MOOC Hype: A Guide to Higher Education's High-Tech Disruption," a new e-book by The Chronicle's technology editor. What are MOOCs? MOOCs are classes that are taught online to large numbers of students, with minimal involvement by professors. Why all the hype? Advocates of MOOCs have big ambitions, and that makes some college leaders nervous. These are like OpenCourseWare projects, right? Sort of. Who are the major players? edX

Lessons In Electric Circuits A free series of textbooks on the subjects of electricity and electronics Copyright (C) 2000-2015, Tony R. Kuphaldt These books and all related files are published under the terms and conditions of the Design Science License. A copy of the Design Science License is included at the end of each book volume. As an open and collaboratively developed text, this book is distributed in the hope that it will be useful, but WITHOUT ANY WARRANTY; without even the implied warranty of MERCHANTABILITY or FITNESS FOR A PARTICULAR PURPOSE. Access individual volumes, I through VI: Edition numbers reflect major structural changes to a book volume such as the addition of new chapters, the substantial expansion of existing chapters, or a change in markup language (source code formatting). "Last revised" dates reflect non-trivial changes only. Click here for a detailed changelog of all books. Note to instructors: Interested in contributing to this project? News flashes (Reverse chronologic order) All volumes!

Troubleshooting and Repair of Consumer Electronic Equipment Including: Test Equipment, Supplies, Parts, Incredibly Handy Widgets(tm), Sources of Information, and Where to Find Broken Stuff Version 2.47 (21-Feb-12) Reproduction of this document in whole or in part is permitted if both of the following conditions are satisfied: This notice is included in its entirety at the beginning. There is no charge except to cover the costs of copying. Table of Contents Preface Author and Copyright Introduction Getting Into Troubleshooting Comments on How to Learn Repair THE Question: To Repair or Not to Repair If You Decide That You Don't Want to Bother Repairing Something Smoking Around Electronic Equipment General Safety Considerations Basic Troubleshooting Some of My Rules of Troubleshooting Some Quick Tips or Rules of Thumb On-Line Tech-Tips Databases Getting Inside Consumer Electronic Equipment How to Build Obsolescence In Before the Name Goes On Tools, Test Equipment, and Other Stuff Hand Tools Emergency Screw Removal Plastic Screw Thread Repair Workbench and AC Power Adhesives

Concise electronics for geeks Copyright (C) 2010 by Michal Zalewski <lcamtuf@coredump.cx> There are quite a few primers on electronics on the Internet; sadly, almost all of the top hits resort to gross oversimplifications (e.g., hydraulic analogies), or convenient omission, when covering subtle but incredibly important topics such as the real-world behavior of semiconductors. There are some exceptions, to be sure - but they tend to suffer from another malady: regressions into mundane, academic rigor, complete with differential equations and complex number algebra in transient analysis - a trait that is highly unlikely to be accessible, or even useful, to hobbyists. The physics of conduction [link] As you probably recall from your school years, the dated but still useful Bohr model of the atom explains that atoms consist of a dense center (nucleus) with a variable number of protons and neutrons. The strongly bound and heavy nuclei of stable isotopes do not undergo any structural changes under everyday circumstances.

IS UNIT WEB SITE - IPTS - JRC - EC MOOCKnowledge MOOCKnowledge is a 3-year study that aims to develop a knowledge base with a European view on MOOCs through continuous and systematic collection and analysis of data on existing MOOC initiatives to advance scientific understanding of this new phenomenon. The study consists of a series of surveys (in different time periods) of the learners of MOOCs offered by the OpenUpEd partners and other European providers willing to collaborate with the study. Building a knowledge base for European MOOCs The study consortium wants to make agreements with as many MOOC providers as possible to produce large-scale data basis allowing analysing the MOOC-phenomenon from a European perspective based on scientific evidence. Partners The MOOCKnowledge study is funded by the European Commission's Institute for Prospective Technological Studies (IPTS). Contact Project Leader (ICT for Learning & Skills): Yves Punie Project coordinator (MOOCKnowledge): Jonatan Castaño Muñoz

The MOOC Problem The purpose of education is in large part linked to its standing as a social science. Philosophers dating back to Socrates have linked education to a purpose beyond the individual, one where accrual of facts and training in skills is not the outcome or objective for the individual nor society; rather, a deeper relationship with thought and reason is necessary for the development of each person and in turn their community. This is at the heart of much great philosophy: luminaries such as Locke, Milton, Rousseau, Hume and others saw education as a continuation of society through means greater than memory recall and skilled competencies. The education discipline is built upon this theory and is at the heart of its mission: through pedagogy and methodology education can foster the growth of our culture through each person. This is not the methodology from which most outside interests view education. Hybrid Pedagogy uses an open collaborative peer review process.

The Professors Behind the MOOC Hype - Technology Dave Chidley for The Chronicle Paul Gries, of the U. of Toronto, has taught MOOCs on computer science. By Steve Kolowich What is it like to teach 10,000 or more students at once, and does it really work? The largest-ever survey of professors who have taught MOOCs, or massive open online courses, shows that the process is time-consuming, but, according to the instructors, often successful. Nearly half of the professors felt their online courses were as rigorous academically as the versions they taught in the classroom. The survey, conducted by The Chronicle, attempted to reach every professor who has taught a MOOC. Hype around these new free online courses has grown louder and louder since a few professors at Stanford University drew hundreds of thousands of students to online computer-science courses in 2011. Princeton University's Robert Sedgewick is one of them. Like many professors at top-ranked institutions, Mr. It paid off. Why They MOOC Mr. But it might also be good for him. Mr. Mr.

14 Articles on MOOCs Size Isn’t Everything – Cathy Davidson – The Chronicle Review – The Chronicle of Higher Education Wired UK raises the possibility that the university may have to restructure itself. That undoubtedly will raise numerous hackles. But from an intellectual standpoint, it signals a revolution in waiting. Online Learning – The Chronicle of Higher Education MOOC Madness. Massive Open Online Courses Views & Research – The Conversation The Conversation about MOOCs. Educause. 7 things you should know about MOOCs. What You Need to Know About MOOCs – Technology – The Chronicle of Higher Education What are MOOCs? The End of the University as We Know It – Nathan Harden – The American Interest Magazine In fifty years, if not much sooner, half of the roughly 4,500 colleges and universities now operating in the United States will have ceased to exist. THE MOOC MODEL FOR DIGITAL PRACTICE: Siemens, Cormier, et alia What is a MOOC? MOOCs chapter of Curt Bonk’s Monster Syllabus great article collection 06 Aug 12

Even in a MOOC, Students Want to Belong Maybe we could rename a mob of meerkats as a MOOC … For the past couple of years Australian universities’ enthusiasm for online learning has increased, following the lead of international universities in realizing the potential of massive open online courses (MOOCs) to replace traditional face-to-face learning. While the number of students undertaking studies on campus has remained relatively stable over the past three years, the number undertaking online or a combination of on-campus and online education continues to grow. The increase in online learning has taken place around the same time as a significant shift in the social and economic background of students. The implementation of the Bradley equity review of higher education has led to modest improvements in the number of university students from low socioeconomic backgrounds, regional/remote areas, indigenous students, students from a non-English-speaking background and students with a disability. Courses ideally: