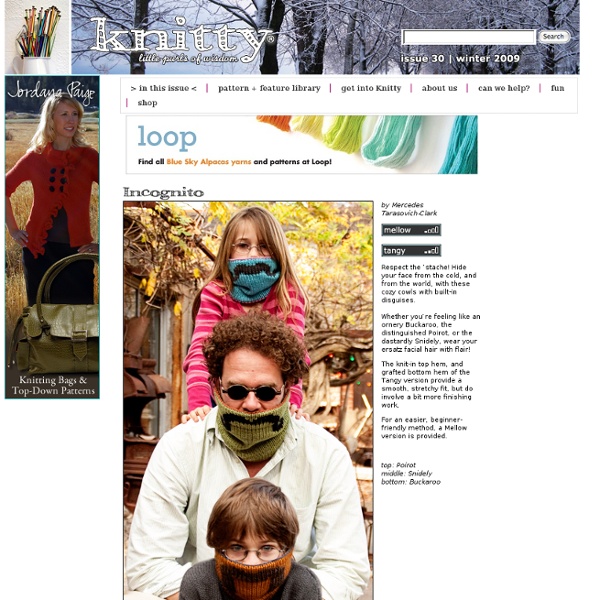 Bandana Cowl Working at Purl Soho, I have a front row seat to the parade of effortlessly chic people that give our neighborhood its renowned style. From here I can report that, for men and women alike, this season's prevailing trend in neckwear is the bandana. Jauntily tied around the neck, it tops off everything from Sunday's T-shirt and jeans to Friday's night-on-the-town dress! The bandana is a sassy, casual touch that suggests that the wearer possesses an innate stylishness. My Bandana Cowl is inspired by my desire to make "effortlessly chic" even more effortless. I chose to make my Cowl out of Swan's Island Bulky, a brand new yarn made from a beautiful blend of undyed merino and alpaca that feels wonderfully soft against the skin. The Materials 1 skein Swans Island Bulky, naturally dyed colors are 100% Organic Merino and undyed colors (Natural, Oatmeal and Seasmoke) are 85% Organic Merino and 15% Alpaca. 2 skeins of Jade Sapphire's 8 Ply Cashmere, 100% Mongolian Cashmere. The Pattern Gauge Begin

RT @SysThinkReview: The NHS. A "fantastic business for Britain"? Outsourcing & mutuals do not equal good method for improvement. http ... The first private company to take over an NHS hospital has admitted in a document seen by the Observer that patient care could suffer under its plans to expand its empire and seek profit from the health service. Circle Health is already feeling a strain on resources due to its aggressive business strategy, the document reveals, and the firm's ambition to further expand into the NHS "could affect its ability to provide a consistent level of service to its patients", it says. The company, run by a former Goldman Sachs banker, was awarded management of Hinchingbrooke hospital in Cambridgeshire last week in a ground-reaking move lauded by ministers as a "good deal for patients and staff". However, the government was forced to answer an urgent question in the Commons after the move sparked furious accusations that the deal was privatising the NHS and putting jobs and health services in jeopardy. The revelation that the company shares some of the fears of its critics has caused fresh uproar.

Recycle Tutorial: Braided Rag Rug My mum threw me 2 bundles of old bed sheets she found during spring cleaning. She knows that I love to recycle and able to make something good out from them. In support of the Earth Hour campaign, I am going to spend the whole March making recycle handmade and will switch off my lights for 1 hour on March 27, 8:30pm. Hope you will do so too The first idea that came across my mind was rag rug, yes, with all this rotten bed sheets I can make lots of rag rugs. I love the touch of this braided rag rug….. it is rough!!! Let’s go and see how I make this 22″ x 16″ oval shape braided rag rug {Get full details on next page.} Pages: 1 2 Get all updates via email: Highlights from Our Partners

Pottery Barn Knit Hack | Knits for Life You always walk through stores remarking to yourself “Pshaw… I could make that!” But how often do go home and prove it? Here’s a free project I created to help you restore that balance and make your holiday hostess and guests squeal with delight. Be sure to share your finished hacks on the pattern page over on Ravelry. Knits for Life Knit Hack! Pottery Barn product photo Pottery Barn Wine Bottle Accessory Knit Hack by Knits for Life Yarn: 0.55 oz (32 yd) Malabrigo Worsted Merino in Amoroso. Hat CO 24. Scarf CO8 1.K2, P4, K2 2.P2, K4, P2 3.K2, P4, K2 4-5. Have fun! Like this: Like Loading...

RT @llantwit: The Girl With the Red Hair blog on Occupy Cardiff 11/11/11 (video to accompany blog) The Occupy Cardiff movement had been building for a while, inspired by others who have joined in the worldwide movement, Friday 11th November 2011 marked the beginning of Occupy Cardiff, around 100 protestors met at the Aneurin Bevan statue at 2pm to begin the occupation, it lasted just over 6 hours. Arriving on the scene of Occupy Cardiff at half past four the afternoon of November the 11th, myself and fellow journalism student Nick Meredith were greeted by the sight of wet and weathered tents, sodden trampled grass, and damp, cold protesters. Stepping down onto the grounds outside the castle, working my way among the tents I spotted a few familiar faces. At one stage in the evening the protesters were offered an alternative occupy site, they were asked by Neil McEvoy, deputy councillor of Cardiff Council to move the protest to Callaghan Square. (Cardiff council byelaw, section 164 Public health act) PDF Of the six arrested, four were held for six hours.

Downloadable Knitting Patterns - Chic Knits FALL 2011 - Chic Knits Knitting Patterns Designed by Bonne Marie Burns How ’bout a Nightcap? Here’s a fun little pattern to embellish your gifts of spirits for the New Year. These sweet little stocking caps look adorable perched atop bottles of all kinds. Knit them in the round with small amounts of scrap yarn in about 30 minutes, then pat yourself on the back for avoiding buying another expensive, throw-away bow! Materials: 3.5 mm double pointed needles (US size 4) small amount DK to worsted yarn Instructions: CO 15 loosely and join in the round being careful not to twist stitches P 4 rows K 12 rows (K2tog, k3) around K 3 rows (K2tog, K2) around K 7 rows (K2tog, K1) around K 14 rows k2tog around k 10 rows cut yarn and thread through remaining stitches. Happy 2012 to you, Crafty Friends! Download How ’bout a Nightcap PDF Pattern © Copyright 2011 Simply Notable Fine Print: We are absolutely flattered that our crafty friends would want to make cute items from our original copyright patterns to sell in their online shops or brick and mortar stores.

I seem to have incurred some wrath... If there is one thing that gets right up my nasal passages, it's the encroachment of fluffy ideologies into the realms of science in general and medicine in particular. It has been my view for quite some time (and as I get older, this is concretifying rapidly, if that's even a word) that there's a group of no-doubt well-meaning but scientifically illiterate punters who are trying to develop a framework of talking about human behaviour, at all levels from the individual to the societal, based on whims and arcane concepts that have no useful mapping to anything scientific. This is the world of pseudophilosophy (or maybe "Philosophy as She is Writ), where concepts are "isms" and everything belongs to a rigid ontological hierarchy. It's the world of CP Snow's Two Cultures, except that the scientists are the baddies, and to get anywhere you need to be able to drone at length on "post-structuralism" and "dialectics" and the like. So we're stuck with what is actually the key problem.