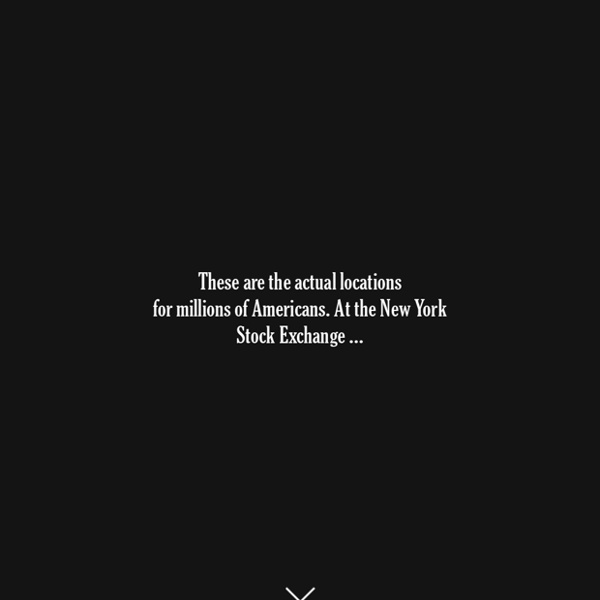 These are the actual locations for millions of Americans. At the New York Stock Exchange … … in the beachfront neighborhoods of Los Angeles ... … in secure facilities like the Pentagon … … at the White House … … and at Mar-a-Lago, PresidentTrump’s Palm Beach resort. One nation, tracked An investigation into the smartphone tracking industry from Times Opinion Every minute of every day, everywhere on the planet, dozens of companies — largely unregulated, little scrutinized — are logging the movements of tens of millions of people with mobile phones and storing the information in gigantic data files. Each piece of information in this file represents the precise location of a single smartphone over a period of several months in 2016 and 2017. [Related: How to Track President Trump — Read more about the national security risks found in the data.] One search turned up more than a dozen people visiting the Playboy Mansion, some overnight. A typical day at Grand Central Terminal in New York City Mr.

The 11 best games to play on your new PlayStation 4 Sony’s PlayStation 4 may be entering its eighth and final year in 2020, but that doesn’t mean you can’t be a new PS4 owner this holiday season. After all, game consoles are cheaper than ever ahead of next fall’s next-gen refresh, and there are scores of amazing titles from the last decade or so that are still worth playing. For Sony, 2020 is going to be a huge year, in fact. There’s Final Fantasy VII Remake coming in March, as well as The Last of Us Part II in May.

Indigenous DNA database should be managed by its people Canada’s use of DNA collection and analysis was expanded in March 2018 through the creation of five new DNA databases. Three were created for humanitarian purposes, and the other two are for criminal investigations. The RCMP National DNA Data Bank (NDDB) manages all five. Ex-UK PM Gordon Brown calls for global government to tackle coronavirus pandemic – Government & civil service news Gordon Brown was instrumental in coordinating the global effort to lessen the impact of the 2008 financial crash. (Photo by Mark Dolby via flickr). Former UK prime minister Gordon Brown has urged world leaders to create a temporary form of global government to deal with the coronavirus crisis. Brown said the proposed global taskforce should oversee and support the development of a vaccine and the production and distribution of medical equipment, and help to deal with the economic fallout of the crisis. To do the latter, it should coordinate the efforts of central banks; take steps to prevent the flight of capital from emerging market economies; and agree a joint approach to the use of government spending to boost growth. Brown, who was at the centre of international efforts to lessen the impact of the 2008 financial crash, told The Guardian the taskforce should comprise heads of state, health experts and the heads of international organisations.

How one cosmetics company is highlighting Indigenous representation Ashley Callingbull, Autumn Peltier, and Buffy Sainte-Marie have at least two things in common: each is an Indigenous woman known for her work and activism, and each is the inspiration for a lipstick shade in Cheekbone Beauty’s Warrior Women makeup collection. Cheekbone Beauty is a St. Catharines-based cosmetics company that was founded in 2016 by Jenn Harper, an Ojibwe woman with roots in Northwest Angle 33 First Nation, near Kenora. Its mission, according to its website, is “to not only make a difference in the lives of Indigenous youth through addressing the educational funding crisis but to also create a space in the beauty industry where Indigenous youth feel represented.” Its Warrior Women collection features 16 lipstick shades, all named after Indigenous women working to improve their community.

How Indigenous artists are getting even more creative during COVID-19 What’s an artist without an audience? That’s what Anishinaabe musician Brenda MacIntyre asked herself after a Toronto performance was cancelled due to COVID-19. “All of a sudden — boom,” she says. Shutterstock's free image editor gets new 'Remove Background' tool: Digital Photography Review Shutterstock Editor, the stock image company's free online image-editing web app, has added a new feature called Remove Background. With this tool, users can easily remove the background from images in order to isolate the subject, making it possible to incorporate the extracted element or person into other designs. Shutterstock Editor offers users access to custom canvas sizes, such as ones intended for ebook covers and Instagram posts; users can also create their own custom canvas size. Images can be uploaded from an online destination using a URL or from the user's computer, plus there's the option of selecting an image from Shutterstock's collection. The web app also offers access to free design templates.

In Just 10 Days, Dyson Designed a Completely New Ventilator Specifically for Covid-19 Patients Fortunately for all of us, there are quite a few individuals and companies stepping up in different ways, from donating needed medical supplies to partnering with other manufacturers to build devices like ventilators. I've already written about how Apple was donating millions of masks to health care workers (10 million as of now), and how Tesla CEO Elon Musk purchased 1,000 ventilators from China and had them shipped to Los Angeles. Then there's the effort from billionaires like Bill Gates and Mark Zuckerberg to bring more testing to Seattle and San Francisco, respectively. And, I wrote about Ford's strategy of working with other companies like GE to help increase the pace of building ventilators. Of course, building complicated life-sustaining devices like ventilators takes time. Dyson

Netgear is releasing a new Orbi mesh Wi-Fi system with a cool, boxy design Many of Netgear’s Orbi Wi-Fi routers seem to look like strange oval towers, but its newest mesh router system has a newer, boxier, and much more interesting design. Check it out: At just 4.1 inches on a side and 2.7 inches tall, I like how small these are. I think they look way cooler than the Orbi oval towers or the multi-antenna TP-Link I’ve got mounted on my wall. That said, the smaller size means the new Orbis aren’t as powerful as Netgear’s recently-introduced $699.99 Orbi Wi-Fi 6 mesh network, not least of which because they don’t have the new Wi-Fi 6 capabilities.