This Column Is Not Sponsored by Anyone - NYTimes.com. What is the Mess We Are in, and How Did We Get Here? Peter Turchin Intra-Elite Competition: A Key Concept for Understanding the Dynamics of Complex Societies - Peter Turchin.

The death wish in the contemporary west. Americans have been through any number of “this is the end” worries over the last few years from both the Left and the Right. 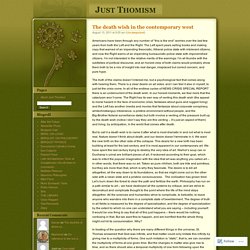 The Left spent years selling books and making copy that warned of an impending theocratic, illiberal police state with intolerant citizens, and now the Right warns of an impending bureaucratic police state with impoverished citizens. I’m not interested in the relative merits of the warnings: I’m all thumbs with the subtleties of political discourse; and an honest view of both claims would probably show them both to be a mix of insight into real danger, misplaced but correct concern, and pure hype. The truth of the claims doesn’t interest me, but a psychological fact that comes along with hearing them. Commentary: Evidence points to another Snowden at the NSA. America's Main Problem: Corruption. National Security Notice. 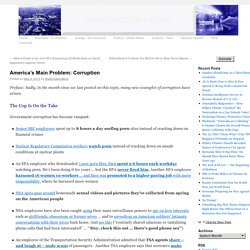 The Left Has It Wrong When It Comes to Sex Ed. For the past several decades, teen pregnancy in the United States has been on the decline. 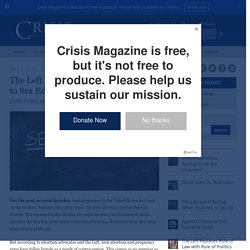 And since the early 1990s, the teen abortion rate has been in freefall. The reasons for this decline are multi-faceted, not the least of which includes the fact that more teens today are practicing abstinence than they were some twenty years ago. But according to abortion advocates and the Left, teen abortion and pregnancy rates have fallen largely as a result of contraception. This comes as no surprise as a large part of the abortion industry’s business is largely dependent on making teens and young adults reliant on birth control. A recent report released by the Guttmacher Institute, a research group that until recently was affiliated with the Planned Parenthood Federation of America, shows that, as of 2011, teen pregnancy was still on the decline.

The decline in teen abortion is not merely a symptom of falling teen pregnancy rates either. Mirror of Justice. I've received some skeptical reactions to the concluding assertion in my prior post on the Little Sisters of the Poor case that "it's difficult to see how the government wins. 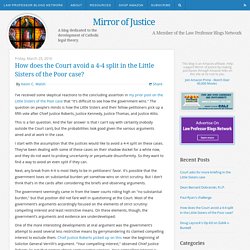 " The question on people's minds is how the Little Sisters and their fellow petitioners pick up a fifth vote after Chief Justice Roberts, Justice Kennedy, Justice Thomas, and Justice Alito. This is a fair question. And the fair answer is that I can't say with certainty (nobody outside the Court can!) Mirror of Justice. Mirror of Justice. When the leftward end of the American political spectrum proposes yet another government program or entitlement, the budgetary costs and the dangers of ever bigger government tend to be immediately apparent. 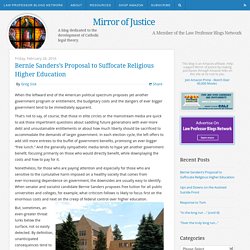 That's not to say, of course, that those in elite circles or the mainstream media are quick to ask those impertinent questions about saddling future generations with ever-more debt and unsustainable entitlements or about how much liberty should be sacrificed to accommodate the demands of larger government. In each election cycle, the left offers to add still more entrees to the buffet of government benefits, promising an ever-bigger “free lunch.” And the generally sympathetic media tends to hype yet another government benefit, focusing primarily on those who would directly benefit, while downplaying the costs and how to pay for it. But, sometimes, an even-greater threat lurks below the surface, not so easily detected. Podcast: Skewed Sex Ratios and Dating. LMS Chairman: Patriarchy and symmetry. I noted in the last post in this series that neo-cons frequently prefer silence about the authority of the husband to outright denial of the teaching. 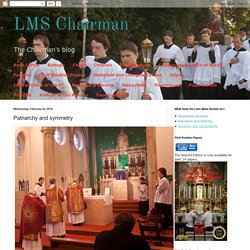 The few brave neo-cons who address the question twist themselves into the most extraordinary knots about it, like this one. To love IS TO SUBMIT. To love is to make oneself SUBJECT TO ANOTHER. To love is to freely choose to put another above yourself, to literally live for another. Women Dislike Having Female Bosses More Than Men Do - Businessweek. Women fighting for a broader presence in the upper levels of management face at least one very personal obstacle: Most workers don’t want them there. 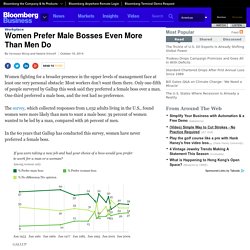 Only one-fifth of people surveyed by Gallup this week said they preferred a female boss over a man. One-third preferred a male boss, and the rest had no preference. The survey, which collected responses from 1,032 adults living in the U.S., found women were more likely than men to want a male boss: 39 percent of women wanted to be led by a man, compared with 26 percent of men. In the 60 years that Gallup has conducted this survey, women have never preferred a female boss. The lack of faith in female leadership among some women may be partly related to widespread negative perceptions of women in charge, documented in scientific studies and at length in Facebook Chief Operating Officer Sheryl Sandberg’s book, Lean In.

LMS Chairman: How Feminism made men into jerks. Continuing this series, I am going to try another way of approaching the central problem, to see if this is helpful. 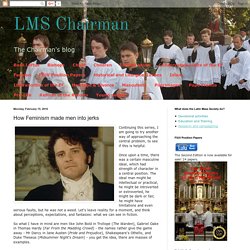 Once upon a time, there was a certain masculine ideal, which had strength of character in a central position. The ideal man might be intellectual or practical, he might be introverted or extroverted, he might be dark or fair, he might have limitations and even serious faults, but he was not a weed. Edward Feser: The two faces of tolerance.

What is proclaimed and practiced as tolerance today, is in many of its most effective manifestations serving the cause of oppression. 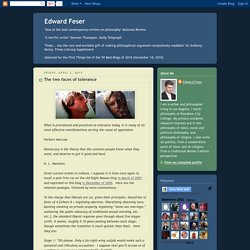 Herbert Marcuse. A User's Guide to Godless Liberalism, Part I. Secular progressives who reign supreme today over every “elite” institution in the West have a long list of dogmatic beliefs. 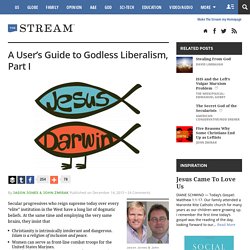 At the same time and employing the very same brains, they insist that Christianity is intrinsically intolerant and dangerous.Islam is a religion of inclusion and peace.Women can serve as front-line combat troops for the United States Marines. Female Islamist refugees can pose no threat to America.It is healthy and good for most people in the world to identify themselves with their racial or ethnic group.It is profoundly evil and dangerous for Westerners to do the same.It is hateful for Americans of European descent to “appropriate” elements of other cultures, for instance by wearing sombreros on Halloween.It is courageous for a man to identify as a woman, and we must honor “her” identity with access to the Ladies’ Room. We could go on for hours, but you get the point: Your secular liberal neighbor’s beliefs are completely incoherent.

The Suicide Clusters at Palo Alto High Schools. The air shrieks, and life stops. First, from far away, comes a high whine like angry insects swarming, and then a trampling, like a herd moving through. The kids on their bikes who pass by the Caltrain crossing are eager to get home from school, but they know the drill. Brake. Wait for the train to pass. Five cars, double-decker, tearing past at 50 miles an hour. The kids wait until the passing train forces a gust you can feel on your skin.

The War Men Won't Fight - EpicPew. It’s not just high heels that men don’t do. Ingesting Group 1 carcinogens in order to be ready for sex 24/7 is another thing. For that reason, male hormonal contraception has bombed. Men won’t take a drug that makes them feel even a little bad. Death and disability has never even entered into the equation– unlike for women–yet still, they have snubbed a male pill. 21 Signs That Americans May Be The Unhappiest People In The World.

Submitted by Michael Snyder via The End of The American Dream blog, How can we possibly be so miserably unhappy? For a nation that supposedly “has it all”, we sure are depressed. In America today, suicide rates are soaring, antidepressant use is skyrocketing and virtually every new survey that comes out shows that we are deeply dissatisfied about something.

Video from NBC Archives: Modernist Bishop James P. Shannon vs. Faithful Peritus Mons. Rudolph G. Bandas. After the Synod: A Church Divided? One of the most common takeaways from Synod 2015 is that it revealed deep “divisions” within the Catholic Church. Political Correctness Reigns: Half of College Students Hide Beliefs From Profs. Denis Dutton. This invited address was given at a meeting the American Psychological Association in San Francisco on August 24, 2007. Shock video: Violent mob of topless pro-abort feminists assaults praying men, tries to burn Cathedral. Why Re-Colonization? Commonweal Orientation. Europe and the U.S. are both being overrun with illegal immigrants from the South. We recently asked the question, 'Why? ' One answer, we've found, could be the former's higher levels of Future Orientation.

Is the Ambiguity in Synod Documents Intentional? Although it is unpleasant to discuss, there is a medical disorder (sometimes called “pica”) in which a person desires to eat non-nutritive, non-food substances like glass, plastic, dirt, wood, and apparently almost anything else one could imagine. Besides their disordered desire to eat harmful things, people with pica otherwise seem to be normal and are able to function in society. Even so, eating sharp or solid objects damages the digestive system, and that invariably leads to serious health problems, possibly even death.

Young men giving up on marriage: ‘Women aren’t women anymore’ Fewer young men in the US want to get married than ever, while the desire for marriage is rising among young women, according to the Pew Research Center. Men Are More Disinclined to Marry Than Ever - A Reflection on a Serious Problem - Community in Mission. A 2012 report on men and marriage by the Pew Research Center shows statistically what many of us have noticed anecdotally: men are finding marriage less desirable than in the past and are now marrying later, if at all.

Theporneffect.com. The Goodness of Adultery, Fornication and Homosex? So What SHOULD We Tell Our Kids About Sex? The Winning Strategy. AMS Calls on U.S. Defense Department to Review Army Reserve Training Material for Anti-Religious Content. What ISIS Really Wants. Fools or Liars? - The Catholic ThingThe Catholic Thing. David Bentley Hart Jumps the Shark: Why Animals Don’t Go to Heaven. Land Of The Free. On Baltimore – waka waka waka. The Economist on the man crisis. The Deadly Dihydrogen Monoxide. Modernity and the Privatization of Purpose. Malcolm Pollack - This And That. Pulling up Roots From Reality – A Review of a Cogent Analysis of the Post Cartesian West.

How the West Really Lost God. Top 10 Legal Rights and Issues Everyone Should Know About. Moldbug’s Gentle Introduction. EXPERIMENTS IN THE LABORATORY OF CONSUMERISM 1959-67. The Largest Vinyl Record Collection in the World. David Brooks to Grads: Be Really Good at Making Commitments. That Time David Brooks Sounded Like A Thomist. 10 Episodes of Television Every Catholic Should Watch - EpicPew. CAN THE REPUBLICAN PARTY AVOID THE FATE OF THE WHIGS? Gun Control Charts! The Eponymous Flower: The War Against Reality. THE HERETICAL (OR CHRISTIAN-INFLUENCED) VIEW OF MODERN MARRIAGE. Marriage, Procreation and Historical Amnesia. ‘Hyperlocal’ Web Sites Deliver News Without Newspapers. 52 Of The World's Most Widespread Myths And Misconceptions, Debunked. Crunchy Granola Catholics.