James Baldwin & the Fear of a Nation by Nathaniel Rich. All Those Strangers: The Art and Lives of James Baldwin by Douglas Field Oxford University Press, 220 pp., $35.00 Early Novels and Stories. 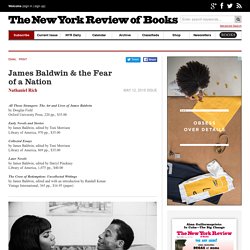 At Harvard Dorms, ‘House Masters’ No More. How Racism on College Campuses—From Microaggresssions to Limited Diversity—Affects Black Students' Mental Health. Amid a surge in student-led protests around the country, many colleges have been struggling to make their campuses more accommodating for minorities. 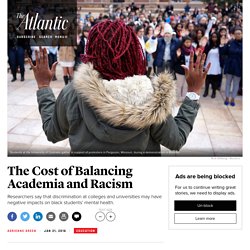 Last semester, student-activist groups nationwide issued demands to their universities seeking everything from mandatory sensitivity-and-racial-bias training to the development of safe spaces on campus for people of color. During a protest at Princeton last semester, students confronted university President Christopher Eisgruber , explaining the emotional reasons behind their demand that the school remove Woodrow Wilson’s name from university buildings. Behind the headlines: 15 memos on race and opportunity. This year shone a bleak light on the deep racial divides of the U.S. 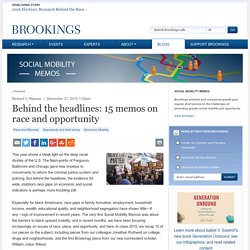 The flash-points of Ferguson, Baltimore and Chicago gave new impetus to movements to reform the criminal justice system and policing. But behind the headlines, the evidence for wide, stubborn race gaps on economic and social indicators is perhaps more troubling still. Especially for black Americans, race gaps in family formation, employment, household income, wealth, educational quality, and neighborhood segregation have shown little­—if any—sign of improvement in recent years.

Claudia Rankine's Poetry Reveals the Harm in Microaggressions - The New Yorker Radio Hour. Should we choose our racial identities? America’s millennials are in crisis—and it’s not all in their heads. It’s now readily apparent that we’re in the midst of a new wave of college student protests. From the ConcernedStudent1950 movement that led to the ouster of University of Missouri President Tim Wolfe to the Million Student March that spanned 110 campuses and called for a debt-free education, campuses across the nation are witnessing an upsurge in student resistance. The protests have focused on the biased treatment of specific student populations, discriminatory practices and the economic challenges students face. John Hope Franklin: Race & the Meaning of America by Drew Gilpin Faust. The historian John Hope Franklin, who died in 2009, would have turned one hundred this year. 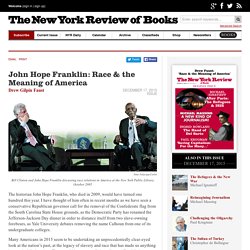 The Perennial Re-Discovery of the Black Intellectual. I recently heard a joke about a fish. 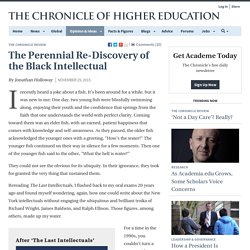 It’s been around for a while, but it was new to me: One day, two young fish were blissfully swimming along, enjoying their youth and the confidence that springs from the faith that one understands the world with perfect clarity. Coming toward them was an elder fish, with an earned, patient happiness that comes with knowledge and self-awareness. Why It's So Hard to Talk to White People About Racism  Dr. 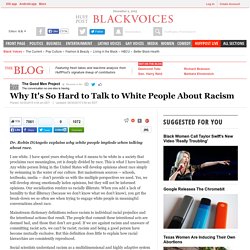 Robin DiAngelo explains why white people implode when talking about race. I am white. I have spent years studying what it means to be white in a society that proclaims race meaningless, yet is deeply divided by race. This is what I have learned: Any white person living in the United States will develop opinions about race simply by swimming in the water of our culture. But mainstream sources -- schools, textbooks, media -- don't provide us with the multiple perspectives we need. Mainstream dictionary definitions reduce racism to individual racial prejudice and the intentional actions that result. Social scientists understand racism as a multidimensional and highly adaptive system -- a system that ensures an unequal distribution of resources between racial groups.

Yes, an individual person of color can sit at the tables of power, but the overwhelming majority of decision-makers will be white. David Shankbone/Wikimedia Commons. Ginwright on Blacklivesmatter « Peter Levine. Why Are Student Protesters So Fearful? Photo THE message coming out of recent student protests on college campuses, from Princeton and to the , couldn’t be clearer: Students are rightly pained by the racist and sexual abuse still shockingly common into the 21st century, and for good reason they are indignant that institutions they trust — or wish to trust — fail to stop the culprits, or even to acknowledge publicly the harm they do. 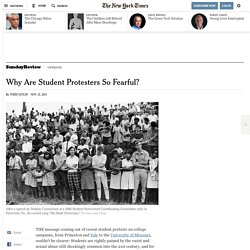 But rumbling under the surface of some recent protests is something besides indignation: an assumption of grave vulnerability. The victims too often present themselves as weak, in need of protection. Administrators are held, like helicopter parents, wholly responsible. To a veteran of movements of the ’60s like myself, this is strikingly strange. Surely there are reasons to feel vulnerable to abuses of power. Continue reading the main story. Student_protesters_want_qualitative_diversity_on_campus.single. Photo by Astrid Riecken For the Washington Post via Getty Images This past week an unknown perpetrator vandalized the portraits of Harvard Law School’s black faculty members, mine included. 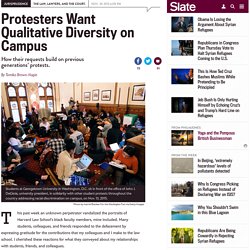 Why We Should Fear University, Inc. Our Favorite Word — 'Diversity' — Is Under The Microscope At Mizzou And Yale : Code Switch. Members of the student protest group Concerned Student 1950 hold hands following the announcement that University of Missouri System President Tim Wolfe would resign. 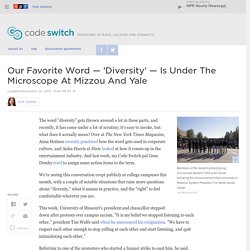 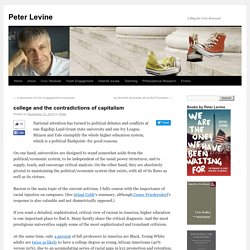 Mizzou and Yale exemplify the whole higher education system, which is a political flashpoint–for good reasons. On one hand, universities are designed to stand somewhat aside from the political/economic system, to be independent of the usual power structures, and to supply, teach, and encourage critical analysis. Has ‘Diversity’ Lost Its Meaning? Adding to the ambiguity is the fact that the definition of ‘‘diversity’’ changes depending on who is doing the talking. The dictionary will tell you that it is ‘‘the quality or state of having many different forms, types, ideas,’’ and the word is often used, without controversy, to describe things like the environment and stock-market holdings. But in reality — which is to say, when applied to actual people, not flora, fauna or financial securities — the notion of diversity feels more fraught, positioning one group (white, male Americans) as the default, and everyone else as the Other.

Multiple studies suggest that white Americans understand “diversity” much differently than black Americans. The delicate little flowers on today's college campuses. It seems like every week there's a new horror story of political correctness run amok at some college campus. A warning not to wear culturally insensitive Halloween costumes sparked an imbroglio at Yale, which went viral over the weekend. A lecturer asked in an email, "Is there no room anymore for a child to be a little bit obnoxious … a little bit inappropriate or provocative or, yes, offensive?