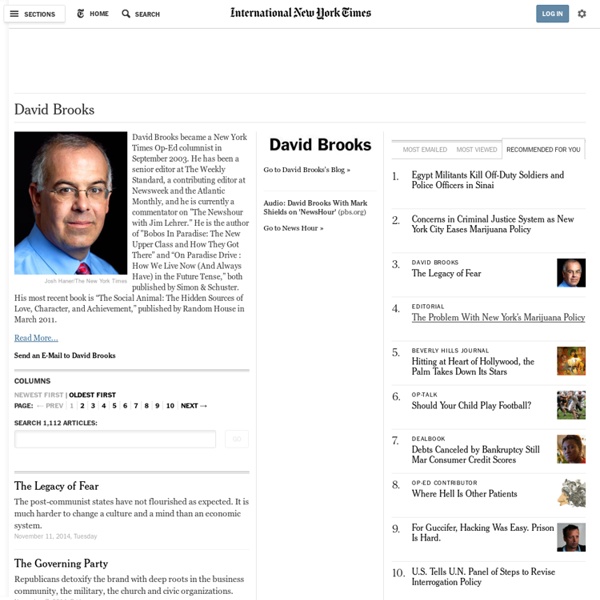 David Brooks became a New York Times Op-Ed columnist in September 2003. He has been a senior editor at The Weekly Standard, a contributing editor at Newsweek and the Atlantic Monthly, and he is currently a commentator on "The Newshour with Jim Lehrer." He is the author of "Bobos In Paradise: The New Upper Class and How They Got There" and “On Paradise Drive : How We Live Now (And Always Have) in the Future Tense,” both published by Simon & Schuster. His most recent book is “The Social Animal: The Hidden Sources of Love, Character, and Achievement,” published by Random House in March 2011. Mr. Mr. He is also a frequent analyst on NPR’s "All Things Considered" and the "Diane Rehm Show."

Unit Conversion - Online Unit Converter Michael Steele in a Dress? Pankaj Mishra reviews ‘Civilisation’ by Niall Ferguson · LRB 3 November 2011 ‘Civilisation’s going to pieces,’ Tom Buchanan, the Yale-educated millionaire, abruptly informs Nick Carraway in The Great Gatsby. ‘I’ve gotten to be a terrible pessimist about things. Have you read The Rise of the Colored Empires by this man Goddard? ‘There was something pathetic in his concentration,’ Carraway, the narrator, observes, ‘as if his complacency, more acute than of old, was not enough to him any more.’ Scott Fitzgerald based Goddard, at least partly, on Theodore Lothrop Stoddard, the author of the bestseller The Rising Tide of Color against White World Supremacy (1920). Hysteria about ‘white civilisation’ gripped America after Europe’s self-mutilation in the First World War had encouraged political assertiveness among subjugated peoples from Egypt to China. The banner of white supremacism has been more warily raised ever since in post-imperial Europe, and very rarely by mainstream politicians and writers. Ferguson himself is homo atlanticus redux.

Global Public Square - CNN.com Blogs Competitive Intelligence - A Selective Resource Guide - Updated and Revised January 2011 [Note: The accuracy and reliability of data and information published on the Web is subject to continuous verification. It is recommended that you use multiple sources, cross-check data and routinely perform due diligence reviews on sources and publications to which you cite and from which you source data. The Web is a dynamic entity - sites often change URLs, content focus, and ownership. Selected Search Engines, Web Archives, Open Data Repositories - facilitate locating information, data and analytics via: Web, Blogs, News, Video and specialized alerts. Web and Data Search - searching and locating relevant, reliable and actionable information will benefit from consistently using a range of search engines, sources, applications and strategies in your research process. bing from Microsoft - has moved to a social media focus with the tagline and associated links - "Explore" - Search with friends. From InfoSpace, a reliable metasearch engine is dogpile. Yahoo! Federated Search Yahoo!

Paul Krugman Paul Krugman joined The New York Times in 1999 as a columnist on the Op-Ed Page and continues as professor of Economics and International Affairs at Princeton University. Mr. Krugman received his B.A. from Yale University in 1974 and his Ph.D. from MIT in 1977. He has taught at Yale, MIT and Stanford. At MIT he became the Ford International Professor of Economics. Mr. At the same time, Mr. Self Help Self Help, by Samuel Smiles The Project Gutenberg EBook of Self Help, by Samuel Smiles Copyright laws are changing all over the world. Be sure to check the copyright laws for your country before downloading or redistributing this or any other Project Gutenberg eBook. This header should be the first thing seen when viewing this Project Gutenberg file. Please do not remove it. Do not change or edit the header without written permission. Transcribed by David Price, email ccx074@coventry.ac.uk “The worth of a State, in the long run, is the worth of the individuals composing it.” “We put too much faith in systems, and look too little to men.” “Heaven helps those who help themselves” is a well-tried maxim, embodying in a small compass the results of vast human experience. Even the best institutions can give a man no active help. The Government of a nation itself is usually found to be but the reflex of the individuals composing it. Old fallacies as to human progress are constantly turning up.

AHML | adding value in your life John Nichols Protesters in Wisconsin, 2011, where communities are voting to amend the constitution. (Darren Hauck/Reuters) Even as the US Supreme Court attempts to expand the scope and reach of the already dangerous dominance of our politics by billionaires and their willing servants, Americans are voting in overwhelming numbers against the new politics of dollarocracy. The headline of the week with regard to the campaign-finance debate comes from Washington, where a 5-4 court majority has—with its McCutcheon v. Federal Election Commission decision—freed elite donors such as the politically-ambitious Koch Brothers to steer dramatically more money into the accounts of favored candidates, parties and political action committees. But the five errand boys for the oligarchs who make up that majority are more thoroughly at odds with the sentiments of the American people than at any time in the modern history of this country's judiciary. 76 percent of the Delavan residents who went to the polls voted “Yes!”

:zenhabits Richard Reeves | Latest Column Column Archive Voting Laws: The Last Stand Of The Old And The White NEW YORK — When the Constitution of the first modern democracy, the United States of America, was written, only about 10 percent of the population of the 13 states was granted the right to vote: white men who owned property. War As A Spectator Sport LOS ANGELES — Sad to say, the most telling commentary on world affairs these days seems to come from comedians. Deep In The Dark Heart Of Texas DALLAS — Greg Abbott, a former judge and three-term attorney general of the great state of Texas, is expected to be the state's next governor. Presidents Are People, Too DALLAS — A few months ago, I agreed to talk at a program at the Sixth Floor Museum here, the building once called the Texas School Book Depository, the building from which Lee Harvey Oswald waited, on the sixth floor, with a rifle for the motorcade that carried President John F. One Nation, Indivisible LOS ANGELES — Immigration is something like the weather.