Understanding Social Commentary. You might be surprised to find that the movie “Avatar,” the novel Animal Farm, and the song “Born in the USA” all have something in common. 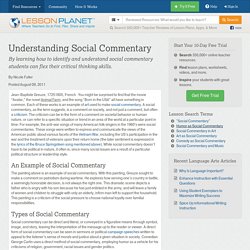 Each of these works is an example of art used to make social commentary. 50 Amazing Social Commentary Illustrations. Pawel Kuczynski is an award winning illustrator and graduate of the Fine Arts Academy in Poznan, Poland. 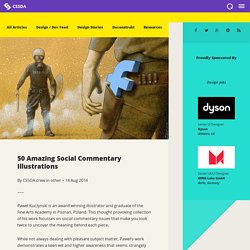 This thought provoking collection of his work focusses on social commentary issues that make you look twice to uncover the meaning behind each piece. While not always dealing with pleasant subject matter, Pawel's work demonstrates a keen wit and higher awareness that seems strangely appropriate in the times we live in today. Like it or hate it, there's no denying the power of Pawel's artistic depictions that deconstruct the amazing world we live in. Warning: May induce negative emotions toward authority. Cartoon 16.03.15 Jihadists. FRONTLINE - Documentary films and thought-provoking journalism.

Earth 2100: The Final Century of Civilization? Interesting propaganda from ABC. 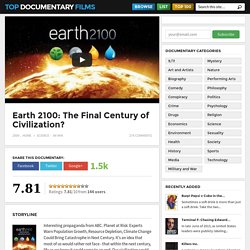 Planet at Risk: Experts Warn Population Growth, Resource Depletion, Climate Change Could Bring Catastrophe in Next Century. It's an idea that most of us would rather not face - that within the next century, life as we know it could come to an end. Our civilization could crumble, leaving only traces of modern human existence behind. It seems outlandish, extreme - even impossible. But according to cutting edge scientific research, it is a very real possibility. In order to plan for the worst, we must anticipate it. By 2015, there are expected to be hopeful signs. But will it be enough? Blue Gold: World Water Wars. Namibia: Genocide and the Second Reich. A hundred years ago, three quarters of the Herero people of the German colony of Namibia were killed, many in concentration camps. 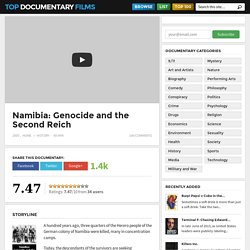 Today, the descendants of the survivors are seeking reparations from the German government. This film tells for the first time this forgotten story and its links to German racial theories. Age of Extremes. The End of the Line: The World Without Fish. The End of Poverty. Global poverty did not just happen. 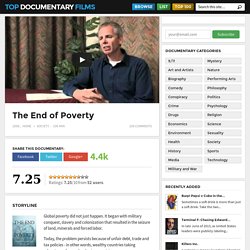 It began with military conquest, slavery and colonization that resulted in the seizure of land, minerals and forced labor. Today, the problem persists because of unfair debt, trade and tax policies - in other words, wealthy countries taking advantage of poor, developing countries. Renowned actor and activist, Martin Sheen, narrates The End of Poverty, a feature-length documentary directed by award-winning director, Philippe Diaz, which explains how today's financial crisis is a direct consequence of these unchallenged policies that have lasted centuries. Consider that 20% of the planet's population uses 80% of its resources and consumes 30% more than the planet can regenerate.

At this rate, to maintain our lifestyle means more and more people will sink below the poverty line. It is produced by Cinema Libre Studio in collaboration with the Robert Schalkenbach Foundation. Science Under Attack. The Canary Effect. Obsession: Radical Islam's War Against the West. In the wake of the terrorist attacks of September 11, 2001, Islamic fundamentalism has, in the minds of many, taken the place once held by communism as the leading threat to the safety and security of the industrialized West. 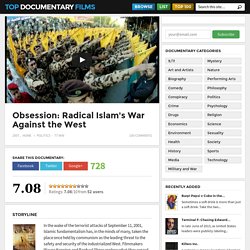 Filmmakers Wayne Kopping and Raphael Shore explore what they regard as the most dangerous force since the rise of Nazism in this documentary. Obsession: Radical Islam's War Against the West features footage from Arab television outlets with interviews which are compared with newsreel images of terrorist actions staged by the PLO and other groups in an effort to show parallels between hate-based groups of the past and the current mood among Islamic extremists.

Obsession also includes interviews with guerilla fighters, former Hitler Youth members, and terrorist operatives as they discuss the role and function of extremist political and religious groups. Obsession is a film about the threat of Radical Islam to Western civilization. The Third Jihad. Hollywood and the War Machine. Empire examines the symbiotic relationship between the movie industry and the military-industrial complex. 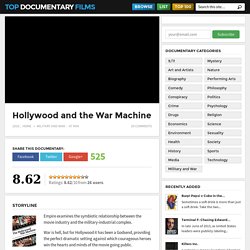 War is hell, but for Hollywood it has been a Godsend, providing the perfect dramatic setting against which courageous heroes win the hearts and minds of the movie going public. The Pentagon recognizes the power of these celluloid dreams and encourages Hollywood to create heroic myths; to rewrite history to suit its own strategy and as a recruiting tool to provide a steady flow of willing young patriots for its wars. What does Hollywood get out of this 'deal with the devil'? Access to billions of dollars worth of military kit, from helicopters to aircraft carriers, enabling filmmakers to make bigger and more spectacular battle scenes, which in turn generate more box office revenue.

2210: The Collapse? Imagine if hundreds of years from now, scientists excavated the abandoned ruins of some of our largest cities, what conclusions would they come to? 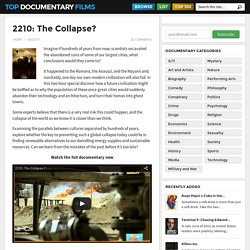 It happened to the Romans, the Anasazi, and the Mayans and, inevitably, one day our own modern civilization will also fall. In this two hour special discover how a future civilization might be baffled as to why the population of these once-great cities would suddenly abandon their technology and architecture, and turn their homes into ghost towns. Some experts believe that there is a very real risk this could happen, and the collapse of the world as we know it is closer than we think.

Examining the parallels between cultures separated by hundreds of years, explore whether the key to preventing such a global collapse today could lie in finding renewable alternatives to our dwindling energy supplies and sustainable resources. End: Civ Resist or Die. END: CIV examines our culture's addiction to systematic violence and environmental exploitation, and probes the resulting epidemic of poisoned landscapes and shell-shocked nations. 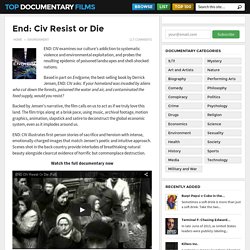 Based in part on Endgame, the best-selling book by Derrick Jensen, END: CIV asks: If your homeland was invaded by aliens who cut down the forests, poisoned the water and air, and contaminated the food supply, would you resist? Backed by Jensen's narrative, the film calls on us to act as if we truly love this land. The film trips along at a brisk pace, using music, archival footage, motion graphics, animation, slapstick and satire to deconstruct the global economic system, even as it implodes around us. END: CIV illustrates first-person stories of sacrifice and heroism with intense, emotionally-charged images that match Jensen's poetic and intuitive approach. Scenes shot in the back country provide interludes of breathtaking natural beauty alongside clearcut evidence of horrific but commonplace destruction. Starsuckers. Prophets of Doom. Bomb Harvest. Bomb Harvest is a 2007 documentary film directed by Australian filmmaker Kim Mordaunt, and produced by Sylvia Wilczynski. 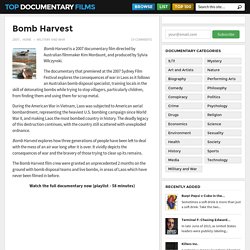 The documentary that premiered at the 2007 Sydney Film Festival explores the consequences of war in Laos as it follows an Australian bomb disposal specialist, training locals in the skill of detonating bombs while trying to stop villagers, particularly children, from finding them and using them for scrap metal. During the American War in Vietnam, Laos was subjected to American aerial bombardment, representing the heaviest U.S. bombing campaign since World War II, and making Laos the most bombed country in history. The deadly legacy of this destruction continues, with the country still scattered with unexploded ordnance. Bomb Harvest explores how three generations of people have been left to deal with the mess of an air war long after it is over. The Dark Side of Chocolate. While we enjoy the sweet taste of chocolate, the reality is strikingly different for African children.

In 2001 consumers around the world were outraged to discover that child labor and slavery, trafficking, and other abuses existed on cocoa farms in the Ivory Coast, a country that produces nearly half the world's cocoa. An avalanche of negative publicity and consumer demands for answers and solutions soon followed. Two members of US Congress, Senator Tom Harkin of Iowa and Representative Eliot Engel of New York, tackled the issue by adding a rider to an agricultural bill proposing a federal system to certify and label chocolate products as slave free. The Exile Nation Project. The Land of the Free punishes or imprisons more of its citizens than any other nation. This collection of testimonials from criminal offenders, family members, and experts on America’s criminal justice system puts a human face on the millions of Americans subjugated by the US Government's 40 year, one trillion dollar social catastrophe: The War on Drugs; a failed policy underscored by fear, politics, racial prejudice and intolerance in a public atmosphere of out of sight, out of mind.

The United States has only 5% of the world's population, yet a full 25% of the world's prisoners. At 2.5 million, the US has more prisoners than even China does with five times the population of the United States. 8 million Americans (1 in every 31) languish under some form of state monitoring known as correctional supervision. Tijuana Drug Lords. Why Beauty Matters. An Inconvenient Death. A documentary wake up call to all families, regardless of political affiliation, to end America's spending and debt crisis. Let us not engage in the wrong argument, at the wrong time, between the wrong people, in the wrong country, while the real problems of our time grow and multiply, fertilized by our own neglect. - John F.

Kennedy's ever insightful quote ushers in a haunting warning in this film's walk through America's new struggle for economic survival in the 21st century. The Light Bulb Conspiracy. Radiant City. Pill Poppers. How much is really known about the medicines we take, and can they be trusted to work? Over a person's lifetime they are likely to be prescribed more than 14,000 pills. Antibiotics, cholesterol lowering tablets, anti-depressants, painkillers, even tablets to extend youth and improve performance in bed. These drugs perform minor miracles day after day, but how much is really known about them? Drug discovery often owes as much to serendipity as to science, and that means much is learnt about how medicines work, or even what they do, when they're taken. By investigating some of the most popular pills people pop, Horizon asks, how much can they be trusted to do what they are supposed to? Developing Drugs. How TV Ruined Your Life.