Using Reinforcement and Punishment to influence the behaviour of Teenagers

A child between the age of 13 to 19 years old is going through his/her period of adolescence. During this period, your teenage child may experience moodswings and behave in a rebellious and disrespectful manner that seems to challenge your authority as their parent.

However, fret not for such challenging behaviour can be managed through the use of the principles of Reinforcement and Punishment in Skinner's theory of Operant Conditioning.

This resource page is easy to navigate and serves to help all parents who are interested in learning how to adopt a variety of strategies that adopts the principles of reinforcemnt and punishment. The page clearly introduces and explains both principles of Operant Conditioning and suggests possible strategies which incorporates them. These strategies provides parents with alternative ways that can help support them in better managing their teenage child's behaviour. I hope that this informative page provides you with a good understanding of what the principles of reinforcement and punishment are as well as how to effectively use them to influence the behaviour of your teenage child.

As everyone may have a preferred way of acquiring new information, this resource page uses a variety of media sources (articles, videos, pictures etc.). At the bottom of the page, the compiled list of all resources used can be found for your easy reference.

Parenting Quiz - Active Parenting. Differences in parenting styles are a problem for both parents and children. 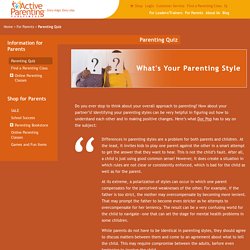 At the least, it invites kids to play one parent against the other in a smart attempt to get the answer that they want to hear. This is not the child’s fault. After all, a child is just using good common sense! However, it does create a situation in which rules are not clear or consistently enforced, which is bad for the child as well as for the parent. At its extreme, a polarization of styles can occur in which one parent compensates for the perceived weaknesses of the other. Quiz: What's your parenting super power? - ReachOut Parents.

This quiz helps you to discover the strength of your parenting style and informs you of ways you can use and adapt it to reap the best results for you and your teenager. – jolenekoh002

Parenting Style Quiz. 4 Types of Parenting Styles and Their Effects on Kids. Your parenting style can affect everything from how much your child weighs to how she feels about herself. It's important to ensure your parenting style is supporting healthy growth and development because the way you interact with your child and how you discipline her will influence her for the rest of her life.

4 Types of Parenting Styles. What's Your Parenting Style. Causes and contributing factors for adolescent's challenging behaviour. Why Teenage Brains Are So Hard to Understand. Common Behaviors You'll See During Each Teen Year. Understanding adolescence, acting out, and calls for help. Teenage Rebellion Isn't What it Used to Be &mdash; Here's How to Deal. It may not seem like it when you’re in the trenches dealing with an out-of-control teenager, but pushing the boundaries is a normal part of adolescence. 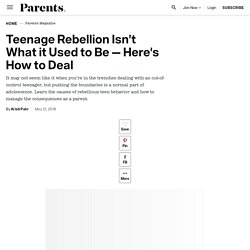 Learn the causes of rebellious teen behavior and how to manage the consequences as a parent. By Kristi Pahr May 21, 2019 Once you're past the toddler stage, many parents think the worst is over. Kids Health Information : Challenging behaviour – teenagers. As they develop, teenagers will experience a range of emotions and express themselves in many different ways. 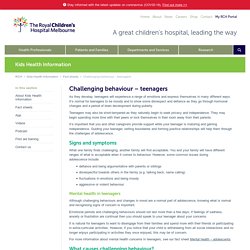 It’s normal for teenagers to be moody and to show some disrespect and defiance as they go through hormonal changes and a period of brain development during puberty. Teenagers may also be short-tempered as they naturally begin to seek privacy and independence. They may begin spending more time with their peers or lock themselves in their room away from their parents.

18 Areas Of Normal Adolescent Behavior. By: Ashley Brown Updated January 15, 2021 Medically Reviewed By: Melinda Santa Raising children is not easy, and it often gets more difficult when they reach adolescence. 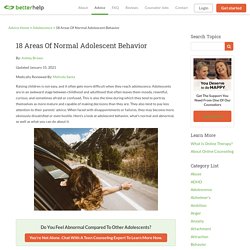 Adolescents are in an awkward stage between childhood and adulthood that often leaves them moody, resentful, curious, and sometimes afraid or confused. This is also the time during which they tend to portray themselves as more mature and capable of making decisions than they are. Teen moods: ups & downs of adolescence. Teen moods: what you need to know Some days your child might be cheerful and excited, and other times he might seem down, flat, low or sad. 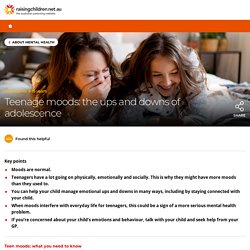 This is a normal part of life for young people in the same way it’s normal for adults. You might notice your child feeling more ups and downs than she used to, or her moods might be more extreme. This could be for many reasons – physical, emotional, social and psychological – and not for any one reason in particular. A Parent's Guide to Surviving the Teen Years. You've lived through 2 a.m. feedings, toddler temper tantrums, and the back-to-school blues. 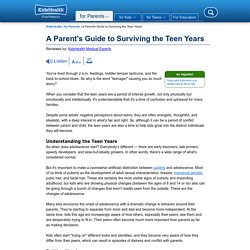 So why is the word "teenager" causing you so much worry? When you consider that the teen years are a period of intense growth, not only physically but emotionally and intellectually, it's understandable that it's a time of confusion and upheaval for many families. Despite some adults' negative perceptions about teens, they are often energetic, thoughtful, and idealistic, with a deep interest in what's fair and right. So, although it can be a period of conflict between parent and child, the teen years are also a time to help kids grow into the distinct individuals they will become. Adolescent Development - The Promise of Adolescence - NCBI Bookshelf. 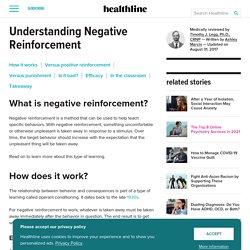 Negative reinforcement is a method that can be used to help teach specific behaviors. With negative reinforcement, something uncomfortable or otherwise unpleasant is taken away in response to a stimulus. Over time, the target behavior should increase with the expectation that the unpleasant thing will be taken away. Read on to learn more about this type of learning. Reinforcement vs. Punishment: What They Are & 12 Examples. "Reinforcement is anything that increases the likelihood that a person will exhibit the same behavior again in the future," says licensed psychologist Nicole Beurkens, Ph.D., CNS. 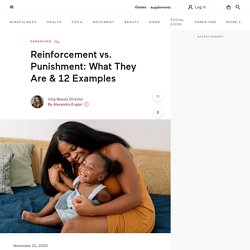 "You are aiming to increase a desired behavior such as speaking politely, doing chores, playing nicely with siblings, and so on. " And chances are you're likely doing this already in some capacity: You praise your kid for tidying up after themselves, you compliment them after getting good grades in school, you take them out for a treat after hitting a milestone or doing well in an extracurricular. As Pressman tells us, it's simply "giving kids attention for a certain behavior. " However, reinforcement can backfire, if done incorrectly. And this comes back to promoting intrinsic motivation, versus extrinsic. 12 Examples of Positive Punishment & Negative Reinforcement. You might be thinking that “positive punishment” sounds like an oxymoron, after all, how can punishment be positive?

So, what actually is positive punishment and how does it relate to parenting, teaching, and even the workplace? Before you read on, we thought you might like to download our 3 Positive Psychology Exercises for free. You can download the free PDF here. Positive Punishment: What It Is, Benefits, and Examples. Positive punishment is a form of behavior modification. In this case, the word “positive” doesn’t refer to something pleasant. Positive punishment is adding something to the mix that will result in an unpleasant consequence. The goal is to decrease the likelihood that the unwanted behavior will happen again in the future. How Negative Punishment Works. Negative punishment is an important concept in B. F. Skinner's theory of operant conditioning. In behavioral psychology, the goal of punishment is to decrease unwanted behavior. In the case of negative punishment, it involves taking something good or desirable away to reduce the occurrence of a particular behavior.

One of the easiest ways to remember this concept is to note that in behavioral terms, positive means adding something while negative means taking something away. What is Negative Punishment (Examples and Effectiveness) In this article, we will review negative punishment, its definition, examples, and drawbacks. American psychologist B.F. Skinner developed the theory of operant conditioning, which stated that a person or animal’s behavior could be increased or decreased by adding or removing appropriate stimuli after the behavior is exhibited. The difference between classical conditioning and operant conditioning is that classical affects unconscious behavior, while operant affects conscious behavior. Operant Conditioning. Positive Reinforcement - The Big Bang Theory.

Operant Conditioning - Negative Reinforcement vs Positive Punishment. What is Negative Reinforcement? Strategies for managing challenging behaviour. Positive Parenting Tips. Tips for Communicating With Your Teen. The teenage years have a lot in common with the terrible twos. During both stages our kids are doing exciting new things, but they’re also pushing boundaries (and buttons) and throwing tantrums. The major developmental task facing both age groups is also the same: kids must pull away from parents and begin to assert their own independence.

No wonder they sometimes act as if they think they’re the center of the universe. This makes for complicated parenting, especially because teens are beginning to make decisions about things that that have real consequence, like school and friends and driving, not to speak of substance use and sex. But they aren’t good at regulating their emotions yet, so teens are prone to taking risks and making impulsive decisions.

This means that having a healthy and trusting parent-child relationship during the teenage years is more important than ever. 1. 2. 3. 4. 5. 6. 7. 8. 9. Teenager behaviour: 6 tips for dealing with moods, pushing boundaries and phone obsession. Dealing with Disrespectful Teenage Behaviour. Disrespectful or rude behaviour in teenagers is something many parents face at some point. Discipline strategies for teenagers. Teenage discipline: the basics Discipline isn’t about punishment. It’s about teaching children appropriate ways to behave. Discipline for Teens: Strategies and Challenges.

Being a parent has been known as the best thing ever BUT also the most challenging endeavor you will encounter in your lifetime. Parents strive to raise a healthy and happy child that will one day grow up as a full-fledged mature and independent adult. But to successfully accomplish this goal, a parent must set forth structure or rules throughout their childhood to help them understand and be realigned when their behavior needs to be modified.

When a parent recognizes the need to change a behavior, they will likely end up using either reinforcement, punishment, or a mixture of both. The value of reinforcing positive behaviour for our teens. As children approach adolescence, they sometimes begin testing limits, bending the rules and otherwise going against the grain. Rewarding behavior is key to parenting teens, study suggests. Parenting is hard, and parenting teens brings about an entirely new set of challenges, from keeping their rooms clean to getting them home before curfew. But, a new study suggests parents who want their teenagers to keep their grades up could have better success if they focus more on rewarding good behavior and less on threatening to punish the bad.

According to the report, published in PLOS Computational Biology, British researchers have found that adolescents focus well on positive incentives, but have difficulty staying motivated to avoid penalties. The study shows that teens and adults learn in different ways, according to the study’s lead author Stefano Palminteri, a researcher with the Institute of Cognitive Neuroscience at University College London. It suggests that “in some cases positive feedback may have more of an effect than negative feedback on learning” in adolescents.

All Infographics. All Videos.