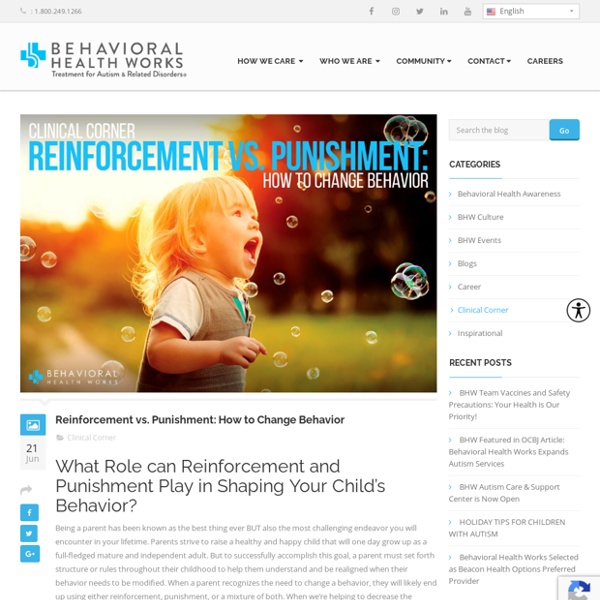 Being a parent has been known as the best thing ever BUT also the most challenging endeavor you will encounter in your lifetime. Parents strive to raise a healthy and happy child that will one day grow up as a full-fledged mature and independent adult. But to successfully accomplish this goal, a parent must set forth structure or rules throughout their childhood to help them understand and be realigned when their behavior needs to be modified. When a parent recognizes the need to change a behavior, they will likely end up using either reinforcement, punishment, or a mixture of both. When we’re helping to decrease the frequency of a child’s negative behavior, having the reinforcement or punishment methods in our toolkit can help you modify and implement the desired behavior. How does Reinforcement help with changing behavior? There are two basic kinds of reinforcement, positive and negative reinforcement. The role of Punishment in making behavioral changes.

Disciplining Your Child at Any Age Each child is different, but most children need to be given clear rules about behavior. Discipline needs to start as soon as a child is pulling up and crawling. Infants rely on their parents to provide a safe environment. Discipline should be age-focused. And it should teach age-appropriate behaviors. Things to keep in mind What is Negative Punishment (Examples and Effectiveness) In this article, we will review negative punishment, its definition, examples, and drawbacks. American psychologist B.F. Skinner developed the theory of operant conditioning, which stated that a person or animal’s behavior could be increased or decreased by adding or removing appropriate stimuli after the behavior is exhibited. The difference between classical conditioning and operant conditioning is that classical affects unconscious behavior, while operant affects conscious behavior. Within operant, punishment aims to reduce a behavior while reinforcement increase a behavior.

Reinforcement vs. Punishment: What They Are & 12 Examples "Reinforcement is anything that increases the likelihood that a person will exhibit the same behavior again in the future," says licensed psychologist Nicole Beurkens, Ph.D., CNS. "You are aiming to increase a desired behavior such as speaking politely, doing chores, playing nicely with siblings, and so on." And chances are you're likely doing this already in some capacity: You praise your kid for tidying up after themselves, you compliment them after getting good grades in school, you take them out for a treat after hitting a milestone or doing well in an extracurricular. As Pressman tells us, it's simply "giving kids attention for a certain behavior." However, reinforcement can backfire, if done incorrectly. And this comes back to promoting intrinsic motivation, versus extrinsic.

Negative Reinforcement: What Is It and How Does It Work? What is negative reinforcement? Negative reinforcement is a method that can be used to help teach specific behaviors. With negative reinforcement, something uncomfortable or otherwise unpleasant is taken away in response to a stimulus. Over time, the target behavior should increase with the expectation that the unpleasant thing will be taken away. Read on to learn more about this type of learning. The relationship between behavior and consequences is part of a type of learning called operant conditioning. Adolescent learning: rewards, punishments, and the importance of context: BOLD Adolescents’ unique sensitivity to rewards is thought to be due to increased activity in and communication between areas of the brain that respond to rewards. However, we also know that many of the same brain areas also respond to punishment and that there are dynamic changes occurring throughout the brain during adolescence. Much like the complexity of brain development, the story about how adolescents learn from reinforcement might not be so simple. “The way that adolescents learn from the choices that they have made in the past will ultimately influence their future choices and actions.” An in-depth review of studies examining how we learn from reinforcement across age shows mixed results. Contrary to the idea that adolescents may learn best from rewards, some studies find that adolescents actually learn more from punishment.

Teens May Learn Best with Positive Reinforcement A new study finds that adolescents focus on rewards and are less able to learn to avoid punishment or consider the consequences of alternative actions. University College-London investigators compared how adolescents and adults learn to make choices based on the available information. Investigators tracked the way in which 18 volunteers aged 12-17 and 20 volunteers aged 18-32 completed tasks in which they had to choose between abstract symbols. Each symbol was consistently associated with a fixed chance of a reward, punishment, or no outcome.

Positive Reinforcement in Psychology (Definition + 5 Examples) If you read our earlier piece on positive punishment, you know that there are different methods of teaching and instilling good habits and behaviors. One of the most powerful and effective methods is one that you’re probably at least somewhat familiar with: positive reinforcement. Before you read on, we thought you might like to download our 3 Positive Psychology Exercises for free. These science-based exercises will explore fundamental aspects of positive psychology including strengths, values and self-compassion and will give you the tools to enhance the wellbeing of your clients, students or employees.

Why you should reward teens instead of punishing them Adolescents focus most on rewards and are less able to consider the consequences of alternative actions or learn to avoid punishments, a new study has shown. The study, conducted by University College London, showed that adolescents learned best when they were rewarded. Adolescents were less good at avoiding punishments than their adult counterparts. Adults also performed significantly better when they were told how different choices would lead to a better outcome, while teenagers didn’t seem to take that into account. The participants in the study were 18 adolescent volunteers aged 12-17 and 20 adults aged 18-32.