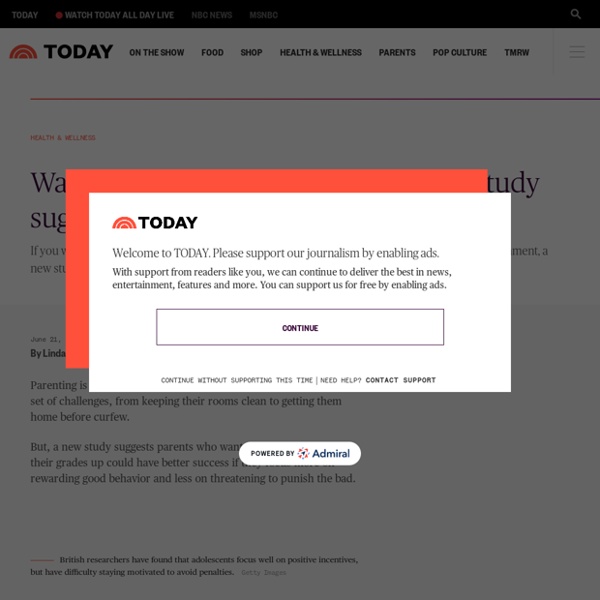 Parenting is hard, and parenting teens brings about an entirely new set of challenges, from keeping their rooms clean to getting them home before curfew. But, a new study suggests parents who want their teenagers to keep their grades up could have better success if they focus more on rewarding good behavior and less on threatening to punish the bad. According to the report, published in PLOS Computational Biology, British researchers have found that adolescents focus well on positive incentives, but have difficulty staying motivated to avoid penalties. The study shows that teens and adults learn in different ways, according to the study’s lead author Stefano Palminteri, a researcher with the Institute of Cognitive Neuroscience at University College London. It suggests that “in some cases positive feedback may have more of an effect than negative feedback on learning” in adolescents. “Rewards give them something they want to think about,” Allen said. "When people go to work they get paid.

Related:  Parents' Guide to Influence Teenager's Behaviour - Reinforcement & Punishment • Operant Conditioning: How does it influences behaviours of teenagers • Should we be using Reinforcement or Punishment to influence our teenage children? • Reinforcement and punishments. Which works best for teenagers? • PSY108 Student Assignment

Adolescent learning: rewards, punishments, and the importance of context Adolescents’ unique sensitivity to rewards is thought to be due to increased activity in and communication between areas of the brain that respond to rewards. However, we also know that many of the same brain areas also respond to punishment and that there are dynamic changes occurring throughout the brain during adolescence. Much like the complexity of brain development, the story about how adolescents learn from reinforcement might not be so simple. “The way that adolescents learn from the choices that they have made in the past will ultimately influence their future choices and actions.” BYU Study: a need for positive reinforcement among teens There are countless publications describing the best ways to raise a child in the hopes of them becoming successful adults. Between the books, magazines and video tutorials, parents may be finding themselves overwhelmed on more than one occasion. But a group of researchers at Brigham Young University have found the answer to helping children through life may be less complicated than it seems. The BYU study found bad behavior can be discouraged among children by simply encouraging good behavior.

It’s Not Discipline, It’s a Teachable Moment WHETHER facing a toddler temper tantrum or an insolent adolescent, every parent struggles to find the best way to discipline children. But many parents fail. A recent study found that 1 in 3 say the methods they use simply don’t work. The problem may not be the kids so much as the way parents define discipline. Childhood health experts say many parents think discipline means meting out punishment.

Positive Reinforcement in Teenagers Teenagers might need special incentives to learn skills, develop responsibility and make positive decisions about their conduct. One effective way to encourage the behaviors you want is to use the behavior management technique of positive reinforcement. Through positive reinforcement, you gradually make it more likely that your teenager will demonstrate the desired behaviors. Goals of Positive Reinforcement Positive and Negative Reinforcement: Which Is More Effective? It has been said that rarely am I short of words, and yet I’ve rewritten this article on positive and negative reinforcement five times. Why? It’s not as if I have a lack of thoughts on this subject. It’s not as if I don’t spend my days enabling people to communicate powerfully and get what they want in life. So why the rewrites?

Positive vs Negative Punishment - Psychestudy Punishment is a fundamental concept of Operant Conditioning, whose major objective is to decrease the rate of certain undesired behavior from occurring again. Punishment can be further classified into two major parts These two different types of punishment have got both similarities and differences, as the major purpose of both these punishment types is to decrease the rate of certain undesired behavior. Teens May Learn Best with Positive Reinforcement A new study finds that adolescents focus on rewards and are less able to learn to avoid punishment or consider the consequences of alternative actions. University College-London investigators compared how adolescents and adults learn to make choices based on the available information. Investigators tracked the way in which 18 volunteers aged 12-17 and 20 volunteers aged 18-32 completed tasks in which they had to choose between abstract symbols. Each symbol was consistently associated with a fixed chance of a reward, punishment, or no outcome. As the trial progressed, participants learned which symbols were likely to lead to each outcome and adjusted their choices accordingly. Adolescents and adults were equally good at learning to choose symbols associated with reward, but adolescents were less good at avoiding symbols associated with punishment.

When Should You Take the Phone Away from a Teenager? Kate Gosselin, the mom in the reality series Kate Plus 8, isn’t exactly someone we’d turn to for inspirational parenting. But she recently said something on a television special that caught our attention. Speaking of her two 13-year-old daughters, she tells the camera: “I got those girls cell phones and iPads so that I could take them away.” Gosselin makes the move sound especially manipulative, but in fact taking away “screen time,” or access to electronic devices, has become a parent’s go-to consequence for unacceptable behavior at practically every age, from toddlers to teens. And if you’re talking about teens, there’s an added dimension. As Gosselin puts it rather crudely, “You get their attention because you cut them off from their friends.”

Discipline for Teens: Strategies and Challenges When your child becomes a teenager, your parenting role is likely to shift. You may find yourself becoming more of a guide, rather than an enforcer. That’s not to say your child won’t need you to intervene when there are safety issues or that your teen won’t need consequences.

From this article, it can be seen that teenagers are most likely to respond to rewards rather than punishments in getting tasks done. This is because of the way humans generally respond, we will be much more motivated to get the reward and thus would work much harder at the task in order to get the reward rather than the punishment. by fareeshahdawoodepeer Sep 24