Discipline for Teens: Strategies and Challenges 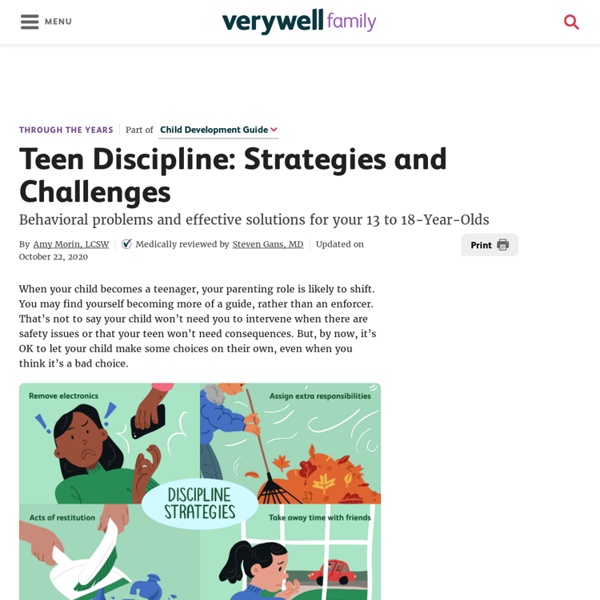 When your child becomes a teenager, your parenting role is likely to shift. You may find yourself becoming more of a guide, rather than an enforcer. That’s not to say your child won’t need you to intervene when there are safety issues or that your teen won’t need consequences. But, by now, it’s OK to let your child make some choices on their own, even when you think it’s a bad choice. Typical Teen Behavior Teens like to test the limits of their independence.1 So don’t be surprised when your teen argues with you when you say no, or when they go behind your back to do as they please. Adolescence can be a tumultuous time for teens as they change physically, emotionally, and socially. Meanwhile, as friends and romantic relationships grow increasingly important, your teen will want to spend more time with their peers. Your teen also will want more privacy. Although that can be unnerving at times, all of these changes are a normal part of growing up. Common Challenges Remove electronics.

Positive vs Negative Punishment - Psychestudy Punishment is a fundamental concept of Operant Conditioning, whose major objective is to decrease the rate of certain undesired behavior from occurring again. Punishment can be further classified into two major parts These two different types of punishment have got both similarities and differences, as the major purpose of both these punishment types is to decrease the rate of certain undesired behavior. 12 Examples of Positive Punishment & Negative Reinforcement You might be thinking that “positive punishment” sounds like an oxymoron, after all, how can punishment be positive? Not many people “like” punishment, right? The disconnect in understanding this concept comes from the usage of the word “positive;” here at PositivePsychology.com, we generally use the term “positive” to refer to things that are inherently good, things that are life-giving, and things that promote thriving and flourishing. The concept of positive punishment comes from a very different era and a very different perspective on psychology; namely, the 1930s and behaviorism.

Examples of Positive Reinforcement Teenagers are young adults who are trying to learn the ways of the world. When they do something great at school or at home or simply make a healthy decision, parents can give them a reward. The reward does not have to be money, but it is a nice way to say "thank you" or "I'm proud of you." Teens need this positive reinforcement because it shows them that they are on the right track.1 It is also a good life lesson that you can pass on: good things happen to good people. When Do Teenagers Deserve a Reward? A teen can earn a reward for positive behavior or by changing negative behavior.1 While you should not feel that you have to "pay" for every good thing your teen does, reinforcement of good behavior will help ensure that it continues.

Rewarding behavior is key to parenting teens, study suggests Parenting is hard, and parenting teens brings about an entirely new set of challenges, from keeping their rooms clean to getting them home before curfew. But, a new study suggests parents who want their teenagers to keep their grades up could have better success if they focus more on rewarding good behavior and less on threatening to punish the bad. According to the report, published in PLOS Computational Biology, British researchers have found that adolescents focus well on positive incentives, but have difficulty staying motivated to avoid penalties. The study shows that teens and adults learn in different ways, according to the study’s lead author Stefano Palminteri, a researcher with the Institute of Cognitive Neuroscience at University College London. It suggests that “in some cases positive feedback may have more of an effect than negative feedback on learning” in adolescents. “Rewards give them something they want to think about,” Allen said.

Why Negative Reinforcement Works Better as Your Child Grows into A Teen If you are someone who has always loved the freedom of “no strings attached”, the idea of marrying and having kids could be quite underwhelming. The idea of having a family always used to bug me, until I finally found the love of my life. It's when I categorically made up my mind about what I wanted from our marriage. I wanted kids, I was clear about that, but I wasn’t certain how I would be taking care of them. The Outgrow of Parenting Fears and My Redemption A year after my marriage, I got pregnant with a baby boy. Punishments vs. Consequences: Teach Your Teen the Difference When I work with parents of teenagers, our conversations inevitably turn toward discipline. “How do get my teen to follow the rules?” “My teen won’t clean up after himself. What should I do?” “Nothing I do seems to have any effect on her!” Discipline with teenagers is complicated.

Adolescent learning: rewards, punishments, and the importance of context Adolescents’ unique sensitivity to rewards is thought to be due to increased activity in and communication between areas of the brain that respond to rewards. However, we also know that many of the same brain areas also respond to punishment and that there are dynamic changes occurring throughout the brain during adolescence. Much like the complexity of brain development, the story about how adolescents learn from reinforcement might not be so simple. “The way that adolescents learn from the choices that they have made in the past will ultimately influence their future choices and actions.”