This is a resource centre for parents who are looking for tips in influencing the behaviour of their teenage children.

In this collection, we focus on the principles of Skinner's operant conditioning and how to incorporate reinforcement and punishment in influencing children's behaviour. 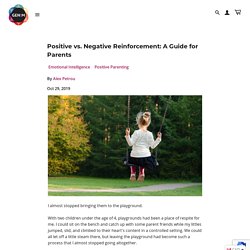 Not many people “like” punishment, right? The disconnect in understanding this concept comes from the usage of the word “positive;” here at PositivePsychology.com, we generally use the term “positive” to refer to things that are inherently good, things that are life-giving, and things that promote thriving and flourishing. The concept of positive punishment comes from a very different era and a very different perspective on psychology; namely, the 1930s and behaviorism. Reinforcement vs Punishment Psychology [Examples] Reinforcement and punishment are often used as parenting tools to modify children’s behavior.

Because the favorable condition acts as a reward, reinforcement is a reward-based operant conditioning. Reinforcement vs. Punishment: Changing Behavior. Being a parent has been known as the best thing ever BUT also the most challenging endeavor you will encounter in your lifetime. 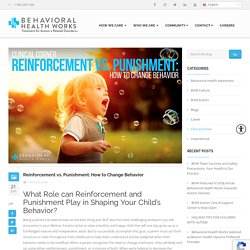 Parents strive to raise a healthy and happy child that will one day grow up as a full-fledged mature and independent adult. But to successfully accomplish this goal, a parent must set forth structure or rules throughout their childhood to help them understand and be realigned when their behavior needs to be modified. When a parent recognizes the need to change a behavior, they will likely end up using either reinforcement, punishment, or a mixture of both. Using Positive Reinforcement to Improve Behavior. When your child misbehaves, rewards might be the last thing on your mind.

But, positive reinforcement can be one of the most effective behavior modification techniques.1 You can use positive reinforcement to encourage prosocial behaviors, like sharing or following directions. And, you can use it to prevent misbehavior, like hitting and rule violations. Positive reinforcement can also be an effective way to encourage and motivate your child to be responsible, do their chores, get along with their siblings, or complete their homework assignments without arguing. How Positive Reinforcement Works. Positive Punishment: What It Is, Benefits, and Examples. 10 Positive Punishment Techniques & Their Effect. By: Ashley Brown Updated February 11, 2021 Medically Reviewed By: Laura Angers As a parent, it is natural to wonder about the best way to teach your child right from wrong. 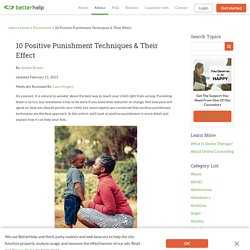 Punishing them is no fun, but sometimes it has to be done if you want their behavior to change. The Study of Punishment in Psychology. Punishment is a term used in operant conditioning to refer to any change that occurs after a behavior that reduces the likelihood that that behavior will occur again in the future.

When your child becomes a teenager, your parenting role is likely to shift. 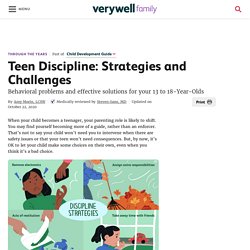 You may find yourself becoming more of a guide, rather than an enforcer. That’s not to say your child won’t need you to intervene when there are safety issues or that your teen won’t need consequences. But, by now, it’s OK to let your child make some choices on their own, even when you think it’s a bad choice. What kind of discipline works for teens? The teen years are notoriously challenging for parents. 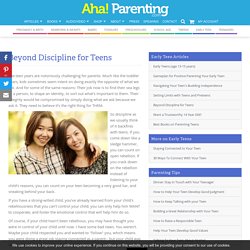 Much like the toddler years, kids sometimes seem intent on doing exactly the opposite of what we ask. And for some of the same reasons: Their job now is to find their sea legs as a person, to shape an identity, to sort out what's important to them. Their integrity would be compromised by simply doing what we ask because we ask it. They need to believe it's the right thing for THEM. So discipline as we usually think of it backfires with teens. If you have a strong-willed child, you've already learned from your child's rebelliousness that you can't control your child; you can only help him WANT to cooperate, and foster the emotional control that will help him do so. Of course, if your child hasn't been rebellious, you may have thought you were in control of your child until now. Raisingchildren.net. Praise: what it is and how it works Praise is when you tell your child that you like what they’re doing or how they’re behaving – for example, ‘Great job, Riley’, ‘Well done, Jo’ or ‘That’s awesome, AB’. 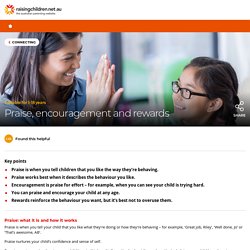 Praise nurtures your child’s confidence and sense of self. Disciplining Your Child. Whatever your child's age, it's important to be consistent when it comes to discipline. If parents don't stick to the rules and consequences they set up, their kids aren't likely to either. Here are some ideas about how to vary your approach to discipline to best fit your family. Ages 0 to 2 Babies and toddlers are naturally curious. So it's wise to eliminate temptations and no-nos — items such as TVs and video equipment, stereos, jewelry, and especially cleaning supplies and medicines should be kept well out of reach. When your crawling baby or roving toddler heads toward an unacceptable or dangerous play object, calmly say "No" and either remove your child from the area or distract him or her with an appropriate activity.

Timeouts can be effective discipline for toddlers. What’s the Best Way to Discipline My Child? As a parent, one of your jobs to teach your child to behave. It's a job that takes time and patience. But, it helps to learn the effective and healthy discipline strategies.