This is a mini bio

'Amsterdam is a cat city pretending to be a dog' – a cartoon. My drawings are best described as written maps or graphic reportages. 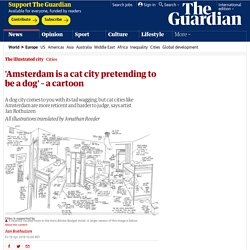 These pieces are from my book The Soft Atlas of Amsterdam. The title is a reference to Soft City, a book written in 1974 by British author Jonathan Raban. His idea is that the city is where the solid concrete reality of buildings and asphalt meets the malleable, subjective experience and expectation of the people who live and work there. When I became an artist I discovered that the confined space of a studio was not for me. Walking around the city streets, meeting people was my way of being an artist. I discovered that my Amsterdam was just a small part of the city – and it struck me that I had actually seen more of Manhattan than certain parts of my own city.

There are cat cities and dog cities. Leidseplein (City square) 2016 As someone born and bred in the city, this is a square I avoid. Anne Frank House 2019 Please click here for a zoomable version of the image Maria Cecilia 2017 Budget Hotel 2016. Extinction Rebellion: How might ministers win over the protesters? Extinction Rebellion: Climate activists block London Stock Exchange. Image copyright Reuters Climate activists have blockaded the London Stock Exchange by gluing themselves across the entrances. 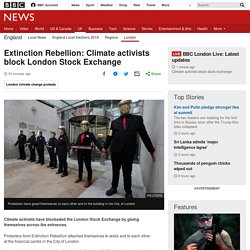 Protesters from Extinction Rebellion attached themselves to walls and to each other at the financial centre in the City of London. A group also climbed on to a Docklands Light Railway (DLR) train at Canary Wharf and held up banners. More than 1,000 people have been arrested since the protests began on 15 April.

The group had previously said it would end its action later in the day, having previously blocked sites including Parliament Square and Waterloo Bridge. New York. Since the 17th century – when it was founded as a Dutch trading post – New York City has been a centre of trade and one of the main gateways for immigration to the United States. 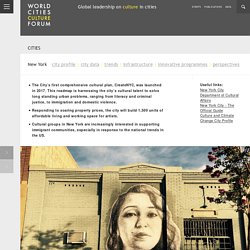 As well as being the capital of finance and law in the United States, New York is a centre for the creative industries: including fashion, design, art and advertising. Along with tourism, which now draws almost 63 million visitors each year, these sectors are growing quickly at a time when employment in the financial sector has plateaued. There is also a growing recognition of the value of creative activity and cultural programming for healthy communities. The creativity driving this success is grounded in New York’s neighbourhoods, which have played an often revolutionary role in developing artforms. Los Angeles. With deep roots in indigenous and Latino culture that stem from centuries of the region’s history, Los Angeles (LA) is also influenced by the arrival of the film industry in Hollywood in the early 20th century. 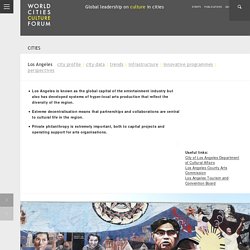 The county of LA is considered to be the third largest metropolitan economy in the world. Beyond film, LA is a major player in television, digital media, music, design and publishing, and today its creative industries are the fourth largest economic sector in the region. In addition to being home to world-class art collections, major concert halls, premier sports venues and more than 200 museums, LA reflects the breadth and diversity of artistic forms and rich cultural traditions in one of the most diverse regions in the United States. As the second most populous city in the United States, LA defies conventions of urban planning. LA has an unusually high percentage of practising artists making up its creative workforce. Climate change: Will insect-eating dogs help? Image copyright Yora Do you fret that your pet pooch is blamed by environmentalists for turning rainforests into poo in the park? 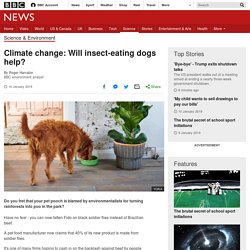 Have no fear - you can now fatten Fido on black soldier flies instead of Brazilian beef. A pet food manufacturer now claims that 40% of its new product is made from soldier flies. Climate change: Failure to tackle warming 'suicidal' Image copyright SOPA Images The UN secretary-general has warned negotiators at a major meeting that failing to increase efforts on climate change would be "not only immoral but suicidal" for the planet. 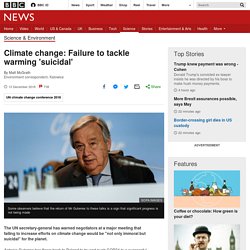 Antonio Guterres has flown back to Poland to try and push COP24 to a successful conclusion. At the UN talks, a group of countries have said they will enhance their climate plans before 2020. The EU and others say they are responding to the urgency of science. Some observers believe that the return of Mr Guterres to these talks is a sign that significant progress is not being made. Climate change is 'shrinking winter' Image copyright NASA Snowy mountain winters are being "squeezed" by climate change, according to scientists in California. 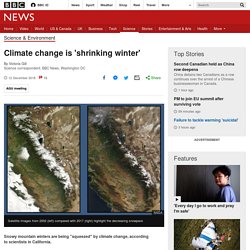 Researchers who studied the winter snowfall in the mountains there revealed that rising temperatures are reducing the period during which snow is on the ground in the mountains - snow that millions rely on for their fresh water. They presented their findings at the American Geophysical Union meeting - the world's largest gathering of Earth and space scientists. "Our winters are getting sick and we know why," said Prof Amato Evan, from the Scripps Research Institute in San Diego, who carried out the investigation. "It's climate change; it's rising temperatures. " Climate change: Trump coal event overshadowed at COP24. 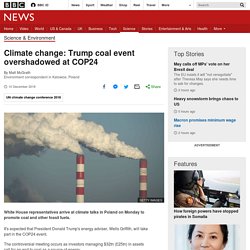 It's expected that President Donald Trump's energy adviser, Wells Griffith, will take part in the COP24 event. The controversial meeting occurs as investors managing $32tn (£25tn) in assets call for an end to coal as a source of energy. Meanwhile, ministers from around 130 countries arrive here to try and steer the talks to a successful conclusion. 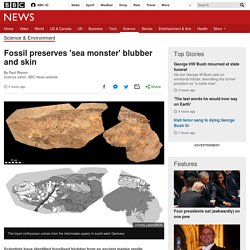 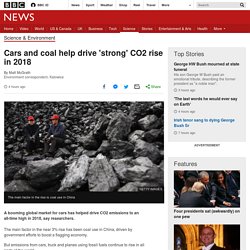 The main factor in the near 3% rise has been coal use in China, driven by government efforts to boost a flagging economy. But emissions from cars, truck and planes using fossil fuels continue to rise in all parts of the world Renewables have also grown this year, but are not keeping pace with the CO2 rise. Windy: Wind map & weather forecast. Climate change: Where we are in seven charts and what you can do to help. Image copyright Getty Images The UN has warned that the goal of limiting global warming to "well below 2C above pre-industrial levels" is in danger because major economies, including the US and the EU, are falling short of their pledges.

But scientists at the Intergovernmental Panel on Climate Change (IPCC) - the leading international body on global warming - argue the 2C pledge in the 2015 Paris accord didn't go far enough. The global average temperature rise actually needs to be kept below 1.5C, they say. So how warm has the world got and what can we do about it? 1. The world is now nearly one degree warmer than it was before widespread industrialisation, according to the World Meteorological Organization (WMO). The global average temperature for the first 10 months of 2018 was 0.98C above the levels of 1850-1900, according to five independently maintained global data sets. (If you can't see this chart tap or click here) If this trend continues, temperatures may rise by 3-5C by 2100. 2. Climate change: 'Trump effect' threatens Paris pact.

Image copyright Getty Images President Donald Trump's words and actions are restricting global efforts to cut carbon, according to a new study. The analysis says the US' withdrawal from the Paris climate agreement has created the political cover for others to go slow on their commitments. Convert Lat Long to Address Show on Map. Projects.truth-and-beauty. Timeline of Earth. Spaceis. Climate change 101: The most important things to understand about this urgent problem.

For many, tackling climate change is the ultimate responsibility of our time – working out how to stop the planet warming up so much and so quickly that it causes irrevocable damage that humanity is ill-prepared to cope with. But for the average person, it can be hard to decipher what it all means, how it will affect us and, crucially, whether we can do anything about it.

A key step is understanding the basics of climate change itself, a term used to explain the consequences of our warming planet. Climate change: Last four years are 'world's hottest' Climate change: EU aims to be 'climate neutral' by 2050. Image copyright Getty Images The European Union says it is aiming to become the first major economy to go "climate neutral" by 2050. Under the plan, emissions of greenhouse gases after that date would have to be offset by planting trees or by burying them underground. Scientists say that net-zero emissions by 2050 are needed to have a fighting chance of keeping global temperatures under 1.5C this century. Sydney storms: Hundreds call for help amid flash-flooding. Strong chance of a new El Niño forming by early 2019. Image copyright NOAA/SCIENCE PHOTO LIBRARY The World Meteorological Organization says there's a 75-80% chance of a weak El Niño forming within three months.

Image copyright AFP/Getty Images UN environment chief Erik Solheim has resigned amid a row over his travel expenses. A recent draft internal audit, obtained by Britain's Guardian newspaper and seen by the BBC, said he had incurred costs of $488,518 (£382,111) while travelling for 529 out of 668 days. It said this harmed the reputation of UN Environment - a body that highlights green issues and sustainability.

Garbage in sea. Geography Jokes. The Truth About The World.