Bulletin readers respond: 12 ways New Zealand could deal better with waste. Starving whale killed 'by swallowing 40kg of plastic' Cheat sheet: A call to arms on New Zealanders’ abuse of the ocean. The actions of New Zealanders on land are increasingly harming the ocean’s ability to sustain life. 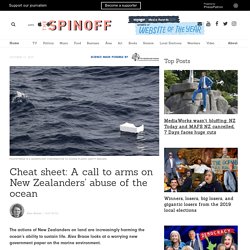 Alex Braae looks at a worrying new government paper on the marine environment. What’s all this then? A new report from the Ministry for the Environment and Stats NZ has sounded alarming warning about state of the massive area of ocean around New Zealand. We’re currently putting whole ecosystems at risk of being killed off, and what’s more we don’t know how close we’re coming to doing just that, or even if it’s too late to save some species.

Dr Matt Pinkerton, a marine ecologist at NIWA, said what jumped out at him from the report was “the lack of adequate information on most issues affecting our marine environment, and the fact that different pressures interact and can reinforce each other creating complex threats.” That sounds bad. It is bad. What is happening to our soft plastic recycling? - RNZ. Packaging and other material that's been put in soft plastic recycling bins has ended up in storage, because the Australian company that was taking it has been inundated. 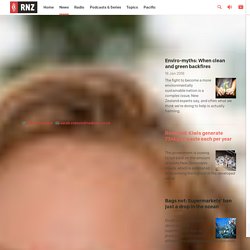 The soft plastic recycling scheme, run by the Packaging Forum, has been operating since 2015 and now covers about 70 percent of the country. Litter by little: New Zealand's 'unhealthy culture' for plastic is increasing - and so is litter. Last updated 05:00, September 20 2018 This is a modal window. 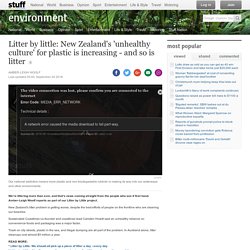 The video connection was lost, please confirm you are connected to the internet Error Code: MEDIA_ERR_NETWORK Technical details : A network error caused the media download to fail part-way. Session ID: 2018-09-19:faad6aa494c8dea362e30516 Player ID: video-1rrjlv Caption Settings Dialog Beginning of dialog window. This is a modal window. Video will play in 5 secondsPlay Now! Stop. NZ's role in the Malaysian plastics dumping ground. Thousands of tonnes of plastic that New Zealand used to send to China for recycling is now going to Malaysia, where illegal factories are burning and dumping the waste they can’t process. 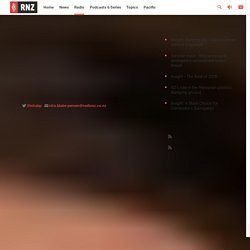 Nita Blake-Persen travelled to Malaysia for Insight to investigate how the lives of local people and the environment are being affected. Koo Ze Quan (left) and Tan Siew Hoon stand on a mountain of plastic waste at an illegal factory in Jenjarom, Malaysia. We Depend on Plastic. Now We’re Drowning in It. This story is part of Planet or Plastic? —our multiyear effort to raise awareness about the global plastic waste crisis. Learn what you can do to reduce your own single-use plastics, and take your pledge. Read this story and more in the June 2018 issue of National Geographic magazine. Why recycling is not the answer for fighting the plastic pollution problem. Britain has today revealed plans to tackle plastic pollution calling it one of the world’s biggest environmental challenges. 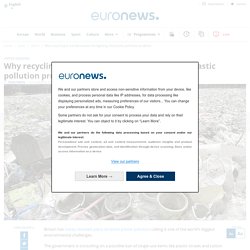 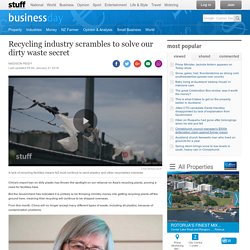 Escape will cancel and close the window. This is a modal window. This modal can be closed by pressing the Escape key or activating the close button. Video will play in 5 secondsPlay Now! Stop Chris McKeen/Stuff A lack of recycling facilities means NZ must continue to send plastics and other recyclables overseas. Our plastic pollution crisis is too big for recycling to fix. Every minute, every single day, the equivalent of a truckload of plastic enters our oceans. 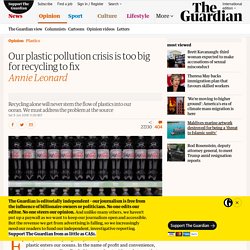 In the name of profit and convenience, corporations are literally choking our planet with a substance that does not just “go away” when we toss it into a bin. Since the 1950s, some 8.3bn tons of plastic have been produced worldwide, and to date, only 9% of that has been recycled. Pollution. By 2000, the world’s chemical production had increased 400 fold since 1930. 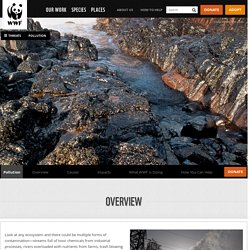 Chemicals have made much of modern life possible, but they’ve also contaminated landscapes around the world. They can travel great distances by air or accumulate in the bodies of animals and humans who absorb chemicals through the skin or ingest them in food or water. While some chemicals may be harmless, others can cause damage. Increasingly, there is particular concern lately about three types of chemicals: chemicals that persist in the environment and accumulate in the bodies of wildlife and people, endocrine disruptors that can interfere with hormones, and chemicals that cause cancer or damage DNA. Air Pollution Facts, Causes and the Effects of Air Pollution.

Jump to Section What Is Air Pollution? 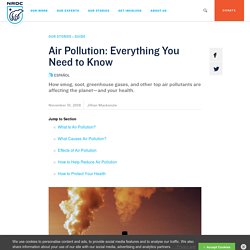 Air pollution refers to the release of pollutants into the air that are detrimental to human health and the planet as a whole. The Clean Air Act authorizes the U.S. Environmental Protection Agency (EPA) to protect public health by regulating the emissions of these harmful air pollutants. Water pollution. Go back Water pollution When toxic substances enter lakes, streams, rivers, oceans, and other water bodies, they get dissolved or lie suspended in water or get deposited on the bed. 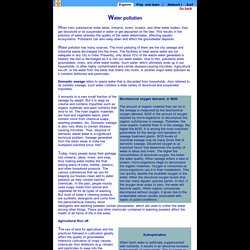 This results in the pollution of water whereby the quality of the water deteriorates, affecting aquatic ecosystems. Pollutants can also seep down and affect the groundwater deposits. Water pollution has many sources. Domestic sewage refers to waste water that is discarded from households. An ocean feeding our trash back to us. SEPTEMBER 11, 2018 Updated September 11, 2018 Futurelearning Clean, lean, protein. It gets our brain working and our fat burning.

Readily available, fresh or frozen, live or dead, it's undeniable that the demand for bony fish is higher than ever. But what do you least expect to be speckled within your sashimi, or weekly fish and chips?