Global shipping is one of the dirtiest industries. Now it's trying to clean up its act. Built by Compagnie Maritime Belge (CMB), it's the world's first sea-faring vessel to burn hydrogen in a diesel engine. 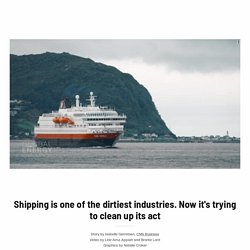 No carbon dioxide or sulfur oxides are released during the process. The ship produces some nitrogen oxide, but that's converted into harmless nitrogen and water by a catalyst. In one of the dirtiest industries in the world, it's a tantalizing glimpse of a cleaner future. Owned by one of Belgium's oldest shipping families, CMB and its small boat are leading the way as the shipping industry tries to tackle its contribution to the climate crisis. "Green hydrogen-based fuels are the only zero-emission solution in the long run," CMB CEO Alexander Saverys told CNN Business. Maritime emissions account for around 3% of global carbon dioxide output, roughly the same as aviation. While the industry was excluded from the 2015 Paris Climate Agreement because its emissions are hard to allocate to individual countries, the international community has started to act.

A weekend in Mexico? Why the rise of long-haul short trips is so disastrous. As someone who once took a work-related day trip to San Francisco it is a little hypocritical of me to criticise others for taking long-haul flights for vanishingly brief holidays. 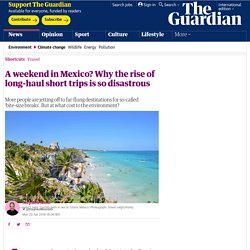 But for all sorts of reasons it really is a terrible idea. The trend has been highlighted in Thomas Cook’s Holiday Report 2019, released this week, which notes “an increasing number of trips for less than seven days to long-haul destinations, with Mexico, San Francisco and other cities in the States rocketing in popularity.” “We call them bite-size breaks,” says a Thomas Cook spokeswoman. G20 nations still led by fossil fuel industry, climate report finds. Climate action is way off course in all but one of the world’s 20 biggest economies, according to a report that shows politicians are paying more heed to the fossil fuel industry than to advice from scientists. Among the G20 nations 15 reported a rise in emissions last year, according to the most comprehensive stock-take to date of progress towards the goals of the Paris climate agreement. The paper, by the global partnership Climate Transparency, found 82% of energy in these countries still being provided by coal, oil and gas, a factor which has relied on an increase of about 50% in subsidies over the past 10 years to compete with increasingly cheap wind, solar and other renewable energy sources.

Ocean warming: Scientists behind study say errors were made. The issues "do not invalidate the study's methodology or the new insights into ocean biogeochemistry on which it is based," said co-author Ralph Keeling, in a note added to the original news release on the study from the Scripps Institution of Oceanography. 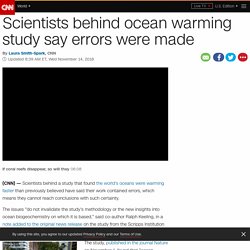 But they do mean the scientists must redo their calculations. The study, published in the journal Nature on November 1, found that "ocean warming is at the high end of previous estimates. " The researchers, led by Laure Resplandy of Princeton University, used precise measurements of atmospheric oxygen and carbon dioxide between 1991 and 2016 to produce an independent estimate of ocean heat uptake over that period. US Supreme Court allows historic kids’ climate lawsuit to go forward. A landmark climate-change lawsuit brought by young people against the US government can proceed, the Supreme Court said on 2 November. 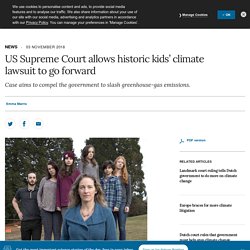 The case, Juliana v. United States, had been scheduled to begin trial on 29 October in Eugene, Oregon, in a federal district court. But those plans were scrapped last month after President Donald Trump's administration asked the Supreme Court to intervene and dismiss the case. The plaintiffs, who include 21 people ranging in age from 11 to 22, allege that the government has violated their constitutional rights to life, liberty and property by failing to prevent dangerous climate change. They are asking the district court to order the federal government to prepare a plan that will ensure the level of carbon dioxide in the atmosphere falls below 350 parts per million by 2100, down from an average of 405 parts per million in 2017.

David Attenborough has betrayed the living world he loves. Knowingly creating a false impression of the world: this is a serious matter. 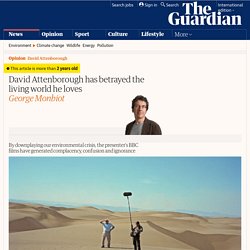 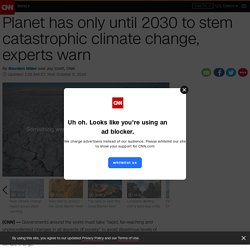 The date, which falls well within the lifetime of many people alive today, is based on current levels of greenhouse gas emissions. "This is concerning because we know there are so many more problems if we exceed 1.5 degrees C global warming, including more heatwaves and hot summers, greater sea level rise, and, for many parts of the world, worse droughts and rainfall extremes," Andrew King, a lecturer in climate science at the University of Melbourne, said in a statement. 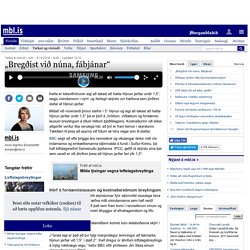