Climate change: Where we are in seven charts and what you can do to help 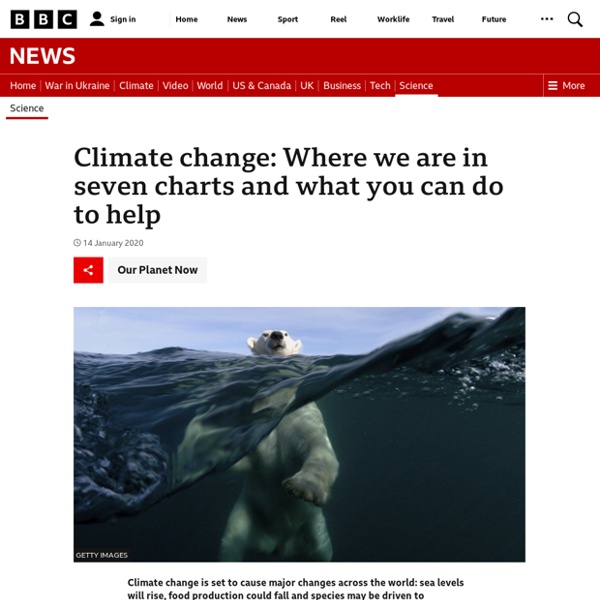 Image copyright Getty Images The UN has warned that the goal of limiting global warming to "well below 2C above pre-industrial levels" is in danger because major economies, including the US and the EU, are falling short of their pledges. But scientists at the Intergovernmental Panel on Climate Change (IPCC) - the leading international body on global warming - argue the 2C pledge in the 2015 Paris accord didn't go far enough. The global average temperature rise actually needs to be kept below 1.5C, they say. So how warm has the world got and what can we do about it? 1. The world is now nearly one degree warmer than it was before widespread industrialisation, according to the World Meteorological Organization (WMO). The global average temperature for the first 10 months of 2018 was 0.98C above the levels of 1850-1900, according to five independently maintained global data sets. (If you can't see this chart tap or click here) If this trend continues, temperatures may rise by 3-5C by 2100. 2. 3.

Trump on own administration's climate report: 'I don't believe it' Donald Trump has told reporters he doesn’t believe his own government’s climate change findings that the US economy will suffer substantially with continued warming from greenhouse gas pollution. “I’ve seen it, I’ve read some of it, and it’s fine,” he said outside the White House on Monday. “I don’t believe it.” The report, called the National Climate Assessment, was quietly released the day after Thanksgiving. Five things we have learned from the IPCC report BBC environment correspondent Matt McGrath outlines five key takeaways from one of the most important reports on rising temperatures issued by the Intergovernmental Panel on Climate Change. Their study, on the impacts and possible methods of keeping temperatures from warming by more than 1.5C, has just been launched in South Korea. It is 'seriously alarming' but surprisingly hopeful

Climate change: 'Trump effect' threatens Paris pact Image copyright Getty Images President Donald Trump's words and actions are restricting global efforts to cut carbon, according to a new study. The analysis says the US' withdrawal from the Paris climate agreement has created the political cover for others to go slow on their commitments. The author says the world is in denial about President Trump's true impact. The study comes as delegates begin two weeks of UN-led talks here on the future of the Paris pact. President Trump has justified pulling his country out of the landmark climate agreement by asserting that he was elected to serve the citizens of Pittsburgh and not Paris. We Depend on Plastic. Now We’re Drowning in It. This story is part of Planet or Plastic?—our multiyear effort to raise awareness about the global plastic waste crisis. Learn what you can do to reduce your own single-use plastics, and take your pledge.

The Tiny Swiss Company That Thinks It Can Help Stop Climate Change Later, Wurzbacher told me he wants to offer a “one click” consumer service, perhaps in a year or two, which would expand what they’re doing in Iceland to individual customers and businesses. A Climeworks app could be installed on my smartphone, he explained. It could then be activated by my handset’s location services. “You fly over here to Europe,” he explained, “and the app tells you that you have just burned 1.7 tons of CO₂. Do you want to remove that? Well, Climeworks can remove it for you.

'Our leaders are like children,' school strike founder tells climate summit Action to fight global warming is coming whether world leaders like it or not, school student Greta Thunberg has told the UN climate change summit, accusing them of behaving like irresponsible children. Thunberg began a solo climate protest by striking from school in Sweden in August. But more than 20,000 students around the world have now joined her. The school strikes have spread to at least 270 towns and cities in countries across the world, including Australia, the United Kingdom, Belgium, the US and Japan. “For 25 years countless people have come to the UN climate conferences begging our world leaders to stop emissions and clearly that has not worked as emissions are continuing to rise.

Climate change: UN panel signals red alert on 'Blue Planet' Image copyright Spl Climate change is devastating our seas and frozen regions as never before, a major new United Nations report warns. According to a UN panel of scientists, waters are rising, the ice is melting, and species are moving habitat due to human activities. And the loss of permanently frozen lands threatens to unleash even more carbon, hastening the decline. There is some guarded hope that the worst impacts can be avoided, with deep and immediate cuts to carbon emissions.

Get Ready For 1.5¢ Renewable Electricity, Steven Chu Says, Which Could Unleash Hydrogen Economy Steven Chu, former U.S. Secretary of Energy, 1997 Nobel Prize winner in physics, and the new president of the American Association for the Advancement of Science. (AP Photo/Tsering Topgyal) Trump confuses climate change with weather, prompting widespread despair Donald Trump has once again confused the weather with climate change after suggesting chilly weather headed towards the US means global warming is not real. “Brutal and Extended Cold Blast could shatter ALL RECORDS - Whatever happened to Global Warming?” Mr Trump tweeted on Wednesday evening. The US president was apparently referring to possible record low temperatures forecast for northeastern US this weekend. Mr Trump’s claim echoed another tweet from a year ago, in which he said America would benefit from “a little bit of that good old global warming” when much of the US was inundated with snow. The 72-year-old has long denied the scientific consensus on climate change, claiming in 2012 the phenomenon was a Chinese hoax intended to hurt American exports.

Climate change: Big lifestyle changes are the only answer Image copyright PA Media The UK government must tell the public small, easy changes will not be enough to tackle climate change, warn experts. Researchers from Imperial College London say we must eat less meat and dairy, swap cars for bikes, take fewer flights, and ditch gas boilers at home. The report, seen by BBC Panorama, has been prepared for the Committee on Climate Change, which advises ministers how to cut the UK's carbon footprint. It says an upheaval in our lifestyles is the only way to meet targets. The government has passed a law obliging the country to cut carbon emissions to net zero by 2050.

Europe Is Stockpiling Wind Energy by Converting It to Hydrogen Clean Chemistry Ørsted, an energy company in Denmark, announced in March its new plans to convert electricity from its wind turbines into hydrogen fuel, joining the ranks of several other prominent European power companies. While it’s expensive, stockpiling renewable electricity as hydrogen makes sense as Europe tries to reach its ambitious climate goals, according to Scientific American — it could be used for power on windless days instead of fossil fuels. Wind Power Ørsted’s plan is to use electricity generated from wind turbines to power electrolysis plants that split water into oxygen and useable hydrogen.

Climate-heating greenhouse gases at record levels, says UN The main greenhouse gas emissions driving climate change have all reached record levels, the UN’s meteorology experts have reported. Carbon dioxide, methane and nitrous oxide are now far above pre-industrial levels, with no sign of a reversal of the upward trend, a World Meteorological Organization report says. “The last time the Earth experienced a comparable concentration of CO2 was 3-5m years ago, when the temperature was 2-3C warmer and sea level was 10-20 metres higher than now,” said the WMO secretary general, Petteri Taalas. “The science is clear. Without rapid cuts in CO2 and other greenhouse gases, climate change will have increasingly destructive and irreversible impacts on life on Earth. The window of opportunity for action is almost closed.”

This Is What Would Happen if We Turned the Sahara Desert Into a Solar Farm Whenever I visit the Sahara I am struck by how sunny and hot it is, and how clear the sky can be. Aside from a few oases, there is little vegetation, and most of the world’s largest desert is covered with rocks, sand, and sand dunes. The Saharan sun is powerful enough to provide Earth with significant solar energy. The statistics are mind-boggling. If the desert were a country, it would be the fifth biggest in the world — it’s larger than Brazil and slightly smaller than China and the US. Each square meter receives, on average, between 2,000 and 3,000 kilowatt hours of solar energy per year, according to NASA estimates.