Managing The Super-Talented is Super-Difficult. Playbook-how-to-motivate-managers. A CEO's guide to leadership development. 7 Leadership Rules From the SEALs Commander Who Got bin Laden. Three years ago, U.S. 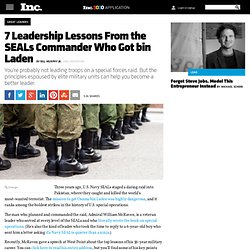 Navy SEALs staged a daring raid into Pakistan, where they caught and killed the world's most-wanted terrorist. The mission to get Osama bin Laden was highly dangerous, and it ranks among the boldest strikes in the history of U.S. special operations. Three Ways Leaders Can Listen with More Empathy - Christine M. Riordan. By Christine M. 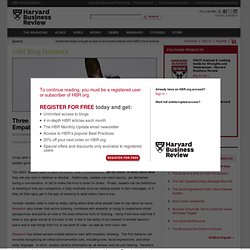 Riordan | 11:00 AM January 16, 2014 Study after study has shown that listening is critical to leadership effectiveness. Why leadership-development programs fail. For years, organizations have lavished time and money on improving the capabilities of managers and on nurturing new leaders. 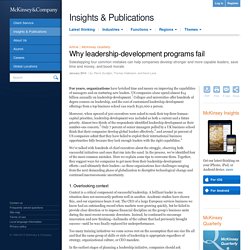 US companies alone spend almost $14 billion annually on leadership development. Colleges and universities offer hundreds of degree courses on leadership, and the cost of customized leadership-development offerings from a top business school can reach $150,000 a person. How to Ask Better Questions - Judith Ross. One of your direct reports walks into your office looking for help: the rollout of the new line of Web-based products she is managing is falling behind schedule. 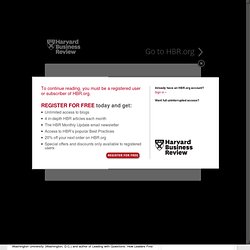 All the prototypes have been created and beta tested, but she is having trouble getting final sign-off from the VP of IT. Deadlines have come and gone, and no amount of reminding or cajoling will get him to focus on her project. As her manager, what should you do? If your first instinct is to suggest a solution, think again. Although providing employees with answers to their problems often may be the most efficient way to get things done, the short-term gain is overshadowed by long-term costs.

Questions packing this kind of punch are usually open-ended — they’re not looking for a specific answer. How Would You Score Yourself as a Manager of People? 6 Ways To Make Your Leadership And Workplace Fun Again. Schmooze or Lose: How the Lost Art of Negotiation Led to a Shutdown. Increasing Productivity and Engagement. Increasing Productivity & EngagementPosted on 28 September, 2013 by Gordon Tredgold Often when we talk about increasing productivity, what we really me is that people should just work harder. 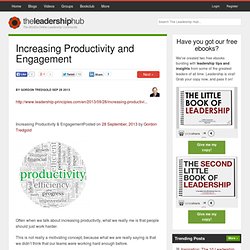 21 Ways to Be a Better Leader Without Breaking a Sweat. 7 Leadership Lies You Need to Stop Believing. We live in an age that seeks quick fixes and easy answers. 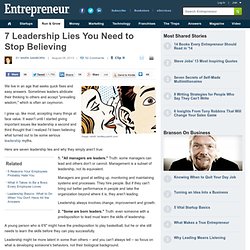 Sometimes leaders abdicate their thinking to others and accept "prevailing wisdom," which is often an oxymoron. I grew up, like most, accepting many things at face value. It wasn't until I started giving important issues like leadership a second and third thought that I realized I'd been believing what turned out to be some serious leadership myths. Here are seven leadership lies and why they simply aren't true: Making Yourself Indispensable. Idea in Brief Good leaders can become exceptional by developing just a few of their strengths to the highest level—but not by merely doing more of the same. 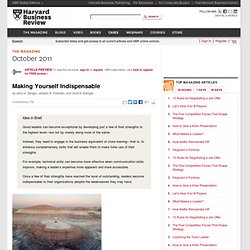 Instead, they need to engage in the business equivalent of cross-training—that is, to enhance complementary skills that will enable them to make fuller use of their strengths. For example, technical skills can become more effective when communication skills improve, making a leader’s expertise more apparent and more accessible. Once a few of their strengths have reached the level of outstanding, leaders become indispensable to their organizations despite the weaknesses they may have. 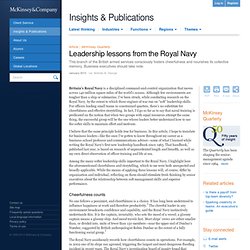 Although few environments are tougher than a ship or submarine, I’ve been struck, while conducting research on the Royal Navy, by the extent to which these engines of war run on “soft” leadership skills. For officers leading small teams in constrained quarters, there’s no substitute for cheerfulness and effective storytelling. In fact, I’d go so far as to say that naval training is predicated on the notion that when two groups with equal resources attempt the same thing, the successful group will be the one whose leaders better understand how to use the softer skills to maintain effort and motivate. 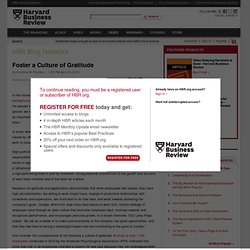 Riordan | 1:00 PM April 23, 2013 In the movie Remember the Titans, Coach Herman Boone takes his high school football team to the battleground of Gettysburg. Six tips to change your workplace culture. Invest in the recruitment process. 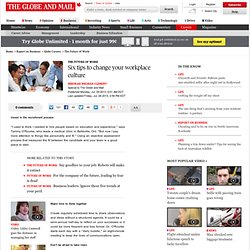 Three Qualities Every Leader Needs to Succeed on a Team - Peter Bregman. “I want your help developing my direct reports into stronger leaders,” John* the new CEO of Fasseni, a $350 million technology company, told me several years ago. Initially, I approached the request like any consultant might. First, I asked John why he wanted my help. He told me that Fasseni had stagnated. They had been hovering around the same revenue point for years and their competitors were gaining market share. He saw opportunity and knew that success lay in the hands of his direct reports. So John and I defined a list of qualities a great leader should have, like expertise in their field, strategic thinking capability, common sense intelligence, powerful communication skills, problem solving prowess, and similar traits.

5 Keys to Inspiring Leadership, No Matter Your Style. Forget the stereotypical leadership image of a buttoned-up person in a gray suit hauling around a hefty briefcase. Today, standout leaders come in all shapes and sizes. She could be a blue jeans-clad marketing student, running a major ecommerce company out of her dorm room. Successful Leadership Skills. For too long, we’ve thought of “hard skills” and “soft skills” as mutually exclusive. Hard skills are supposed to provide the value, and soft skills supposed to be subordinate, inferior, and all about feelings. Some frameworks of leadership reinforce this myth by encouraging positioning leaders as above the group and magically removed from doubt and anxiety.

In reality, there is nothing “soft” about the skills needed to relate to people well enough to lead them. True leadership involves both hard skills and harder skills.