Try Feedforward Instead of Feedback – Marshall Goldsmith. The Five Biggest Teamwork Ills. Twisting your features into a mask of pain, you dig your heels into the soft grass. 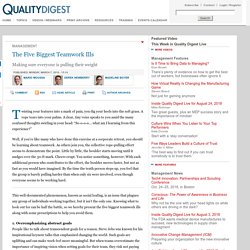 A rope tears into your palms. A clear, tiny voice speaks to you amid the many confused thoughts swirling in your head: “So-o-o-o... what am I learning from this experience?” How to communicate effectively as a leader – Noteworthy - The Journal Blog. Project Management AntiPatterns. In the modern engineering profession, more than half of the job involves human communication and resolving people issues. 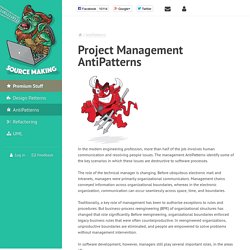 The management AntiPatterns identify some of the key scenarios in which these issues are destructive to software processes. The role of the technical manager is changing. Before ubiquitous electronic mail and intranets, managers were primarily organizational communicators. Management chains conveyed information across organizational boundaries, whereas in the electronic organization, communication can occur seamlessly across space, time, and boundaries. Traditionally, a key role of management has been to authorize exceptions to rules and procedures. How to Provide Great Feedback When You're Not In Charge. 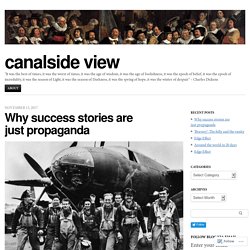 Facebook's VP of Product on Mastering Focus and Intentional Work. When we asked Fidji Simo what she wanted to share with our readers, she polled her team at Facebook to see what they would highlight as her core competency. 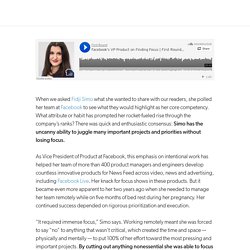 What attribute or habit has prompted her rocket-fueled rise through the company’s ranks? There was quick and enthusiastic consensus: Simo has the uncanny ability to juggle many important projects and priorities without losing focus. As Vice President of Product at Facebook, this emphasis on intentional work has helped her team of more than 400 product managers and engineers develop countless innovative products for News Feed across video, news and advertising, including Facebook Live. Her knack for focus shows in these products. But it became even more apparent to her two years ago when she needed to manage her team remotely while on five months of bed rest during her pregnancy. The Difference Between Amateurs and Professionals. The Manager’s Guide to Cultivating Flow at Work. Bias from Incentives and Reinforcement. What Motivates Employees More: Rewards or Punishments? Executive Summary. 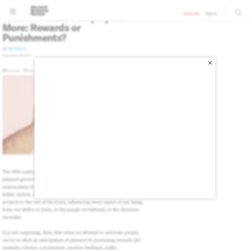 These are Google's tools for effective management — Quartz. That night in 1990 is now apocryphal: Sawmill worker Pete Martell, played by Jack Nance, picked up the phone and called the Twin Peaks Police Department. 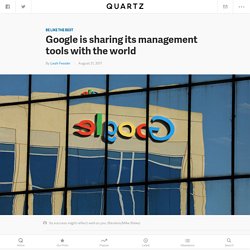 Between shallow breaths, he spit it out fearfully, vowels protracted: “She’s dead…wrapped in plastic.” When ABC aired the pilot episode of Twin Peaks in the spring of 1990, it changed TV forever. When Showtime brought Twin Peaks back in 2017, it may well have done the same thing. Being different from the other TV shows on the networks wouldn’t have been enough to blow open what had been a staid institution. But David Lynch and Mark Frost’s Twin Peaks wasn’t just different—it was paradigm-changing.

Google Spent 2 Years Studying 180 Teams. The Most Successful Ones Shared These 5 Traits. Over the years, Google has embarked on countless quests, collected endless amounts of data, and spent millions trying to better understand its people. 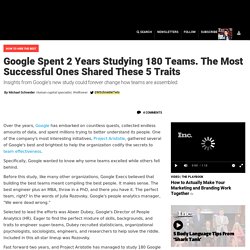 One of the company's most interesting initiatives, Project Aristotle, gathered several of Google's best and brightest to help the organization codify the secrets to team effectiveness. Specifically, Google wanted to know why some teams excelled while others fell behind. Before this study, like many other organizations, Google Execs believed that building the best teams meant compiling the best people. It makes sense. The Colonel Blotto Game: How Underdogs Can Win. The Situation-Behavior-Impact-Feedback Tool - From MindTools.com. © iStockphotosankai Use this tool to help people grow. 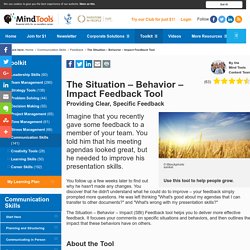 Imagine that you recently gave some feedback to a member of your team. You told him that his meeting agendas looked great, but he needed to improve his presentation skills. Making a Sandwich: Effective Feedback Techniques. Good Management Predicts a Firm’s Success Better Than IT, R&D, or Even Employee Skills. Executive Summary New research confirms that management matters – a lot. 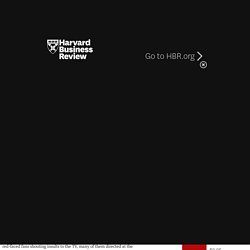 In fact, it matters as much or more than a number of other factors associated with successful businesses, like technology adoption. Perhaps most surprisingly, management quality varies not just between companies, but within them. And good management depends on free markets, competition, and educated employees. Ask any sports fan about their favorite team and they will usually spend half the time either cursing or extolling the manager. 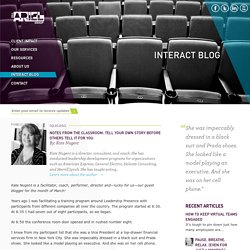 Learn more about the author › Just 6 Seconds of Mindfulness Can Make You More Effective. Some days it’s really draining to be a senior executive. You sit in meetings for hours on end, and every decision you need to make is difficult — all of the easy decisions have already been made at levels below you. The Plus Side of Pissing People Off. Tim Ferriss, author of The 4-Hour Work Week. How to Provide Great Feedback When You're Not In Charge.

How often do we give deep thought to how we provide feedback to others? Six Ways to Help People Change. Try This One Phrase to Make Feedback 40% More Effective. Employees deserve feedback. The CEO Of The Future Is A "Designer-In-Chief" Leaders and Followers, Planners and Doers. Sequoia - Leading vs. Managing. Michael Moritz October 19 2015. Making Yourself a CEO – Andreessen Horowitz. The 4 Weapons Of Exceptional Creative Leaders. How to be an effective leader. Management Secrets: Core Beliefs of Great Bosses. 6 Things Really Thoughtful Leaders Do. Simon Sinek: Why good leaders make you feel safe. The Rise of Compassionate Management (Finally) - Bronwyn Fryer.

By Bronwyn Fryer | 8:00 AM September 18, 2013. Why Compassion Is a Better Managerial Tactic than Toughness. Stanford University neurosurgeon Dr. My Management Lessons from Three Failed Startups, Google, Apple, Dropbox, and Twitter. How to Find Your Power—and Avoid Abusing It. What Great Managers Do. What Makes a Leader? Discovering Your Authentic Leadership.