Third Culture Kids. Nearly a decade ago, Third Culture Kids: The Experience of Growing Up Among Worlds introduced the concept of and has been the authority on the experiences of "TCKs" - children who grow up or spend a significant part of their childhood living abroad. Early on, TCKs were identified as the rototype "citizen of the future.

" That future is now, as more and more children are growing up among worlds, creating a culturally rich and diverse world. Rich with real-life anecdotes, Third Culture Kids, Revised Edition examines the nature of the TCK experience and its effect on maturing, developing a sense of identity and adjusting to one's "passport country" upon return. For many third culture kids, this book will be their first opportunity to discover that they share a common heritage with countless others around the world. This expanded edition profiles the personal challenges that TCKs experience, from feelings of rootlessness and unresolved grief to struggles with maturity and identity. Cross-Cultural Activity: The Anthropologists. Participant Resources Cross-Cultural Activity: The Anthropologists Divide the class into two groups. 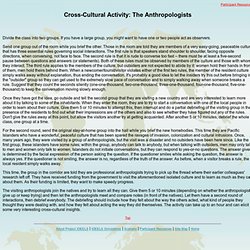 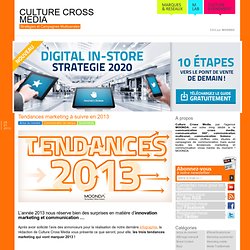 Nombreux sont les annonceurs à avoir intégré le Web-to-Store dans leur stratégie de communication en 2012 avec l’utilisation de store locator, aux fonctionnalités allant des plus élémentaires au plus perfectionnées. Cross-Culture. China - Chinese Business Etiquette, Manners, Cross Cultural Communication, and China Geert Hofstede Analysis. Do not use large hand movements. The Chinese do not speak with their hands. Your movements may be distracting to your host. Personal contact must be avoided at all cost. It is highly inappropriate for a man to touch a woman in public. Do not point when speaking.

To point do not use your index finger, use an open palm. It is considered improper to put your hand in your mouth. Business Culture and Etiquette in China. Chinese business culture and etiquette The Chinese business practice is vastly different from the Western method that most of us may be used to. 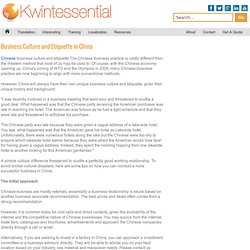 Of course, with the Chinese economy opening up, China's joining of WTO and the Olympics in 2008, many Chinese business practice are now beginning to align with more conventional methods. However, China will always have their own unique business culture and etiquette, given their unique history and background. "I was recently involved in a business meeting that went sour and threatened to scuttle a good deal. What happened was that the Chinese party recieving the American purchaser was late in reaching his hotel. Cultural Differences. Chapter 5 Imagine this scene - you are inspecting a house with the possibility of purchasing it and you open a bathroom door to see a woman sitting naked in a bathtub. How would you expect the surprised woman to react? A British or American woman would cover her breasts with one hand and her genitals with the other, while a Swedish woman would cover only her genitals. A Muslim woman would cover her face, a Sumatran woman would cover her knees and a Samoan only her navel.

We Were Having Pizza at the Time All cultures walk on the same side of the pavement as they drive on the road. You'd also be stunned when you go to shake hands to say goodbye to an Italian but, instead, you get a kiss on both cheeks. Doing Business in China: Cultural Differences to Watch for. For Western businesses, doing business in China requires careful navigation of the cultural differences between China and the West. 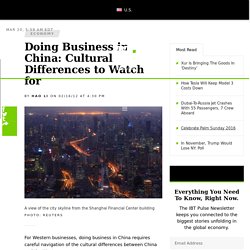 There are plenty for reasons for Westerners to do business in China. The country is the largest exporter in the world and provides many Western businesses crucial intermediate goods and services at low costs. Chinese businesses are also big importers of Western intermediate goods and services. In 2009, the United Nations estimated the Chinese consumer market to be the fourth largest in the world. In 2010, the Boston Consulting Group (BCG) predicted that China will become the world's second largest consumer market after the U.S. by 2015.

Simply speaking, doing business in China, including traveling to China and meeting with Chinese businesspeople, is increasingly becoming unavoidable for more and more Western businesses of size. Below are key cultural differences to account for when doing business in China. Losing Face Chinese culture is non-confrontational.