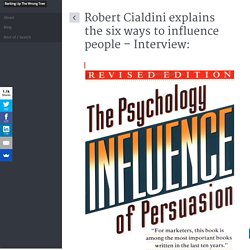 Robert Cialdini Dr. Robert Cialdini is the authority on the study of persuasion. His classic book, “Influence” has sold millions of copies and is widely regarded as the go-to text on the subject. What makes the book so special is it’s not just a collection of academic studies on college students. Meaningful Feedback. Feedback. Soliciting Feedback. Cornerstones Defined. Ban the Feedback Sandwich for Employee Feedback. Managers in workplaces are on a mission to discover ways to provide employees with performance improvement feedback – comfortably and kindly. 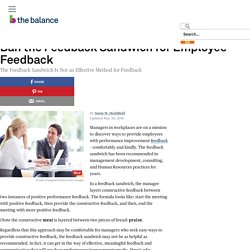 Infographic: Giving Feedback 101 For Managers & Leaders — Sales Development & Leadership Programs. “Employee Engagement” continues to be all the rage in HR circles with several hundred million dollars a year being spent on internal and external programs. 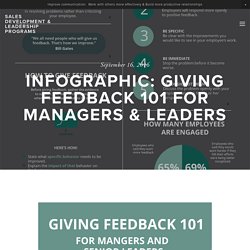 It’s a Huge investment for a situation in which the jury remains out on defining what is meant by engagement and what organizations are really getting for these astronomical investments. It looks like a piece of this puzzle can be solved at far less cost and deeper within the ranks. Recent research indicates that direct management feedback given in the proper context makes for happier and more satisfied employees who are likely to be more productive or “engaged”. Educational Leadership:Feedback for Learning:Seven Keys to Effective Feedback. Communication Congruence – How to Organize Your Ideas to Communicate Effectively « The Shy Speakers' Guide to Success on Stage. I’ve been spending much of my time analyzing and studying some of the most impressive and impactful presentations that I’ve seen for awhile, trying to identify a generic structure or pattern that most effective presenters use. 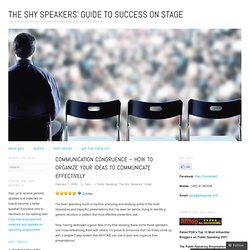 Now, having dedicated a good deal of my time studying these some these speakers and cross-referencing them with others, I’m proud to announce that I’ve finally come up with a simple 3 step system that ANYONE can use to plan and organize their presentations! Interested to know how you can add impact and become an impressive speaker? Then read on for the three simple steps to achieving congruent communication! Step 1 – Knowing Your Audience. 24 charts of leadership styles around the world. Different cultures can have radically different leadership styles, and international organizations would do well to understand them. British linguist Richard D. Lewis charted these differences in his book "When Cultures Collide," first published in 1996 and now in its third edition, and he teaches these insights in seminars with major corporate clients.

From structured individualism in the U.S. to ringi-sho consensus in Japan, the charts seem intuitively correct, if not unilaterally true across a country. Lewis acknowledges the risks of dealing in stereotypes: "Determining national characteristics is treading a minefield of inaccurate assessment and surprising exception. There is, however, such a thing as a national norm. " How The Most Powerful People Get Things Done: 4 Tips From A White House Staffer. We all have big decisions to make and deadlines to meet. 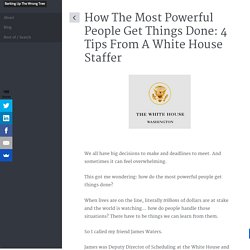 And sometimes it can feel overwhelming. This got me wondering: how do the most powerful people get things done? When lives are on the line, literally trillions of dollars are at stake and the world is watching… how do people handle those situations? Welcome to mindmapping.com. 14 Brilliant Uses for Mind Maps – Engage Your Whole Brain. Mind maps engage your whole brain and allow you to see the big picture. 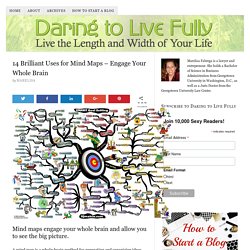 A mind map is a whole-brain method for generating and organizing ideas which is largely inspired by Leonardo da Vinci’s approach to note-taking. The concept was brought into the mainstream by Tony Buzan and is based on patterns found in nature, and on research on how humans think and how the brain works. In “How to Think Like Leonardo da Vinci”, Michael J. Gelb explains that by using mind mapping regularly, you can train yourself to be a more balanced thinker, like da Vinci.

6 Ways to Get Anyone to Do Anything. University of Oxford Style Guide. Academic Phrasebank. The Writing Centre. How to write paragraphs — Advice for authoring a PhD or academic book. In English the core building blocks of any intellectual or research argument are paragraphs. 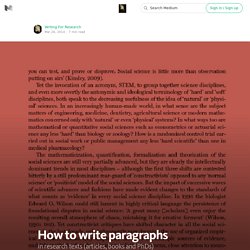 Each paragraphs should be a single unit of thought, a discrete package of ideas composed of closely linked sentences. The most generally applicable sequence to follow is — Topic, Body, Tokens, Wrap. The opening ‘topic’ sentence alerts readers to a change of subject and focus, and cues readers (in ‘signpost’ mode) about what the paragraph covers.

It should never link backwards to material that came before (linkages are instead always made forward in ‘wrap’ sentences). So be wary of starting paragraphs with linking words (such as ‘However’, ‘Never the less’, ‘Furthermore’), lest they lead you into looking back. Rational, skimming readers do not treat all parts of paragraphs in the same way. It follows that the beginning and endings of paragraphs should always be the most carefully written materials. Six common paragraph problems Six things most commonly go wrong in writing paragraphs: How to Write Email with Military Precision. In the military, a poorly formatted email may be the difference between mission accomplished and mission failure. 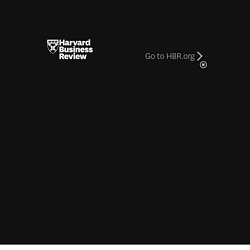 During my active duty service, I learned how to structure emails to maximize a mission’s chances for success. Since returning from duty, I have applied these lessons to emails that I write for my corporate job, and my missives have consequently become crisper and cleaner, eliciting quicker and higher-quality responses from colleagues and clients. Here are three of the main tips I learned on how to format your emails with military precision: 1. 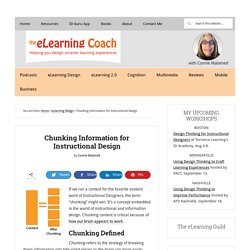 It’s a concept embedded in the world of instructional and information design. Chunking content is critical because of how our brain appears to work. Chunking Defined. 5 Tips for a Happy Life from Winnie the Pooh. “Did you ever stop to think, and forget to start again?” 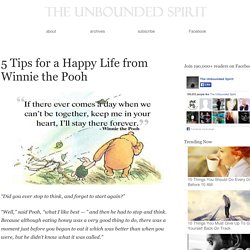 “Well,” said Pooh, “what I like best — ” and then he had to stop and think. Because although eating honey was a very good thing to do, there was a moment just before you began to eat it which was better than when you were, but he didn’t know what it was called.” Winnie the Pooh is a kind bear. He cares greatly about his friends. The 10 Rules You Need to Communicate Effectively. Frank Luntz has “engineered some of the most potent political and corporate campaigns of the last decade.” His wordsmithing helped Republican Rudy Giuliani get elected twice in New York — a city where Democrats outnumber Republicans 5-to-1. Luntz and his polling firm have learned a great deal about language by conducting nearly 1500 surveys and focus groups for a wide range of products and politicians.

The key takeaway from his book is actually part of the title: 10 Common Mistakes in Giving Feedback. There’s good reason that you aren’t eager about giving feedback to the people you work with. It’s hard to do. You might say something you’ll regret later. People are too emotional. All of these reasons top the list among leaders, managers, and executives on why they don’t think they give good, consistent feedback. Steer clear of these 10 blunders when giving feedback, taken from our Feedback That Works guidebook: Mistake #1: The feedback judges individuals, not actions. Mistake #2: The feedback is too vague. Mistake #3: The feedback speaks for others. Mistake #4: Negative feedback gets sandwiched between positive messages.

What was the secret of Abraham Lincoln's success in dealing with people? Incredibly, this is not just a question that a business journalist would ask. Dale Carnegie himself--the legendary author of How to Win Friends and Influence People--asked the exact same question on page 8 of that famous book. 10 Golden Rules of Communication in a Team Environment. The Power of Chunking: How To Increase Learner Retention. In 1980, K. Anders Ericsson and his colleagues published a fascinating experiment. They took a student of average intelligence, memory capacity, and IQ and had an experimenter test the limits of his memory. The experimenter read a series of random numbers and then had the student recite them back in the exact order.

If he was able to recite the numbers in the correct order, the experimenter would add another digit to the next random set. Control–feedback–abort loop.