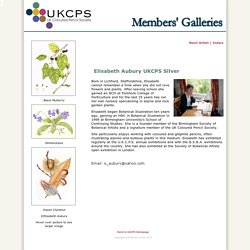 After leaving school she gained an NCH at Pershore College of Horticulture and for the last 25 years has run her own nursery specialising in alpine and rock garden plants. Elisabeth began Botanical Illustration ten years ago, gaining an HNC in Botanical Illustration in 1999 at Birmingham University's School of Continuing Studies. She is a founder member of the Birmingham Society of Botanical Artists and a signature member of the UK Coloured Pencil Society. 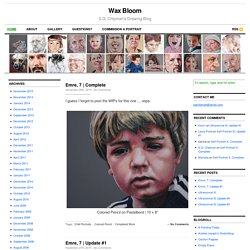 Collin Bogle. Bet Borgeson. Robin Borrett. UKCPS - Robin Borrett. Next Artist | Index I have spent my life always keen to draw, but my painting and illustration career really got underway via a scholarship to Derby Art School, later becoming the Joseph Wright Art School, in 1949. 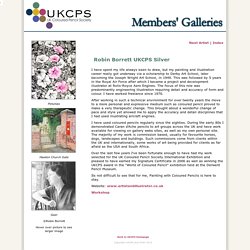 This was followed by 5 years in the Royal Air Force after which I became a project and development illustrator at Rolls-Royce Aero Engines. The focus of this role was predominantly engineering illustration requiring detail and accuracy of form and colour. I have worked freelance since 1970. After working in such a technical environment for over twenty years the move to a more personal and expressive medium such as coloured pencil proved to make a very therapeutic change. I have used coloured pencils regularly since the eighties. Its not difficult to see that for me, Painting with Coloured Pencils is here to stay. Website: www.artistandillustrator.co.uk Workshop. Ronald Bowen. Dawn D Boyer. Graham Brace. UKCPS - Graham Brace. Next Artist | Index I started drawing seriously in January 2000. 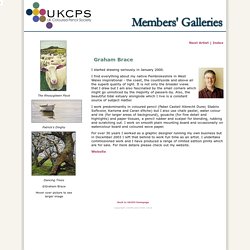 I find everything about my native Pembrokeshire in West Wales inspirational - the coast, the countryside and above all the superb quality of light. It is not only the broader views that I draw but I am also fascinated by the small corners which might go unnoticed by the majority of passers-by. Also, the beautiful tidal estuary alongside which I live is a constant source of subject matter.

UKCPS - Linda Brand. Next Artist | Index I’m self taught and have always enjoyed drawing from an early age. 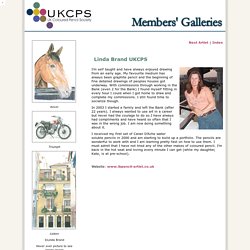 My favourite medium has always been graphite pencil and the beginning of fine detailed drawings of peoples houses got underway. UKCPS - Susan Brinkmann. Next Artist | Index Susan Brinkmann (1963, Southampton) Studied art in Tilburg, the Netherlands Living in the Netherlands My artwork is realistic, but I want to achieve more than photographic realism. 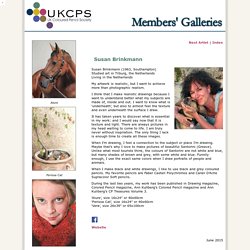 UKCPS - Nicolson Brooks. Next Artist | Index After originally studying Modern Languages, I embarked on a career in Horticulture, which was brought to a halt over two years ago after a motorcycle accident. 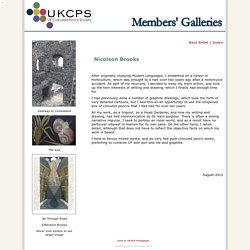 As part of my recovery, I decided to keep my brain active, and took up the twin interests of writing and drawing, which I finally had enough time for. I had previously done a number of graphite drawings, which took the form of very detailed cartoons, but I saw this as an opportunity to use the unopened box of coloured pencils that I had had for over ten years. UKCPS - Hilary Buckley.

Next Artist | Index I attended the Manchester College of Art and Design in the 1960's, where I gained my N.D.D. 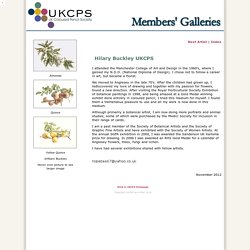 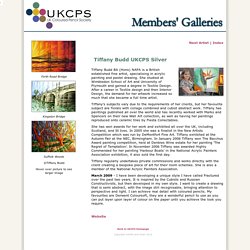 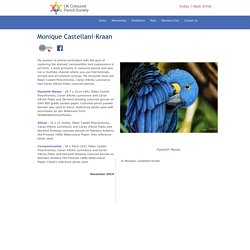 Red Cloud. Gail Collier. Kelly Collins. Tim Cortes. UKCPS - Karen Coulson. Next Artist | Index I am a professional coloured pencil artist and tutor specialising in wild and domestic animal portraits. I live with my family on the edge of the New Forest in Romsey, Hampshire. Beverley Courtney. Lesley Crawford. Joseph Crone. Malcolm Cudmore. Vera Curnow. Barbara Dahlstedt. Lene Daugaard. Dorothy DePaulo. Richard_Devine. Kay Dewar. Simon Dinnerstein. Dion Dior. David Dooley. Richard Drayton. After a long career as a highly successful illustrator and graphic designer, Richard Drayton moved to Sedona, Arizona, and returned to his initial dream of working as a fine artist. It was a dream that began at the age of seven when his unmistakable gift for drawing and painting was encouraged by his grandmother, an experienced watercolor artist. She also inspired his love for the natural world, which remains his all-encompassing passion.

As a youngster, Richard spent much time trekking through the unpopulated hills of Orange County, California, drawing and painting landscape and wildlife. While other boys his age chose sports figures for their heroes, he chose to emulate John James Audubon. By the age of thirteen, his first painting had been sold. Following high school, Richard earned a Fine Arts Degree from San Jose State University, followed by two years of post-graduate study at the Art Center College of Design in Los Angeles.