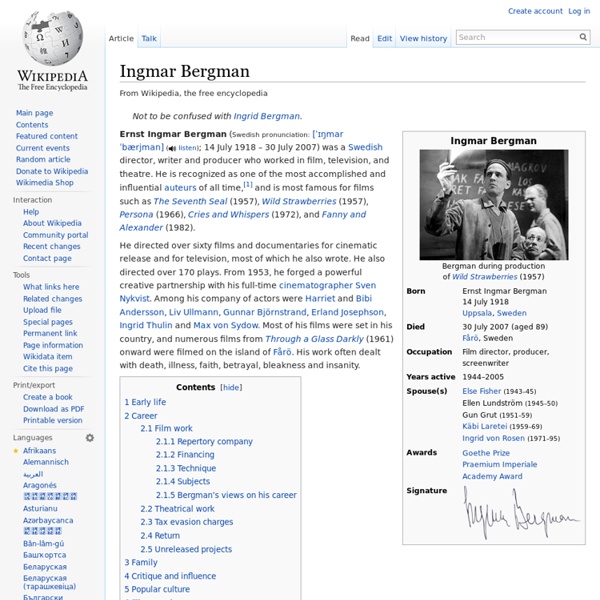 Early life[edit] "I devoted my interest to the church's mysterious world of low arches, thick walls, the smell of eternity, the coloured sunlight quivering above the strangest vegetation of medieval paintings and carved figures on ceilings and walls. There was everything that one's imagination could desire — angels, saints, dragons, prophets, devils, humans". Although raised in a devout Lutheran household, Bergman later stated that he lost his faith at age eight and only came to terms with this fact while making Winter Light in 1962.[4] Bergman’s interest in theatre and film began early: "At the age of nine, he traded a set of tin soldiers for a magic lantern, a possession that altered the course of his life. In 1934, aged 16, he was sent to Germany to spend the summer vacation with family friends. In 1937, he entered Stockholm University College (later renamed Stockholm University), to study art and literature. Career[edit] Film work[edit] Repertory company[edit] Financing[edit] Related:  A-F

Luis Buñuel Luis Buñuel Portolés (Spanish pronunciation: [ˈlwiz βuˈɲwel portoˈles]; 22 February 1900 – 29 July 1983) was a filmmaker who worked in Spain, Mexico and France.[2] When Luis Buñuel died at age 83, his obituary in the New York Times called him "an iconoclast, moralist, and revolutionary who was a leader of avant-garde surrealism in his youth and a dominant international movie director half a century later".[3] His first picture—made in the silent era—was called "the most famous short film ever made" by critic Roger Ebert,[4] and his last film—made 48 years later—won him Best Director awards from the National Board of Review and the National Society of Film Critics.[5] Writer Octavio Paz called Buñuel's work "the marriage of the film image to the poetic image, creating a new reality...scandalous and subversive".[6] Early years (1900–1924)[edit] During his student years, Buñuel became an accomplished hypnotist. Career[edit] First French period (1925–1931)[edit] Un Chien Andalou (1929)[edit]

David Lynch David Keith Lynch (born January 20, 1946) is an American film director, television director, visual artist, musician and occasional actor. Known for his surrealist films, he has developed a unique cinematic style, which has been dubbed "Lynchian", a style characterized by its dream imagery and meticulous sound design. The surreal, and in many cases, violent, elements contained within his films have been known to "disturb, offend or mystify" audiences.[2] Over his career, Lynch has received three Academy Award nominations[3] for Best Director and a nomination for best screenplay. Lynch has won France's César Award for Best Foreign Film twice, as well as the Palme d'Or at the Cannes Film Festival[4] and a Golden Lion award for lifetime achievement at the Venice Film Festival. Life and career[edit] Early life: 1946–1965[edit] Philadelphia and short films: 1966–1970[edit] Los Angeles and Eraserhead: 1971–1979[edit] Lynch's Eraserhead, featuring Henry Spencer (Jack Nance).

Robert Bresson Robert Bresson (French: [ʁɔbɛʁ bʁɛsɔ̃]; 25 September 1901 – 18 December 1999)[1] was a French film director known for his spiritual and ascetic style. He contributed notably to the art of film and influenced the French New Wave. He is often referred to as the most highly regarded French filmmaker after Jean Renoir.[2] Bresson's influence on French cinema was once described by Jean-Luc Godard, who wrote "Robert Bresson is French cinema, as Dostoevsky is the Russian novel and Mozart is German music. Life and career[edit] Bresson was born at Bromont-Lamothe, Puy-de-Dôme, the son of Marie-Élisabeth (née Clausels) and Léon Bresson.[4] Little is known of his early life. Initially also a photographer, Bresson made his first short film, Les affaires publiques (Public Affairs) in 1934. Themes[edit] Legacy[edit] Worldwide[edit] Bresson's book Notes on the Cinematographer (1975) is one of the most respected books on film theory and criticism. French Cinema and French New Wave[edit] Quotes[edit]

Quentin Tarantino Early life[edit] Tarantino was born in Knoxville, Tennessee in 1963.[6] He is the son of actor and amateur musician Tony Tarantino and nurse Connie McHugh.[7][8] He has a younger half-brother named Ron. Tarantino grew bored with the James Best Acting School and left after two years, although he kept in touch with all of his acting friends. He then landed a job which threatened to interfere with his long-term acting ambitions.[17] As an employee of Video Archives, a now-defunct video rental store in Manhattan Beach, he and fellow movie enthusiasts (including Roger Avary) discussed cinema and customer video recommendations at length. He paid close attention to the types of films people liked to rent and has cited that experience as inspiration for his directorial career.[18] Tarantino has been quoted as saying: "When people ask me if I went to film school I tell them 'no, I went to films Film career[edit] 1980s[edit] 1990s[edit] 2000s[edit] 2010–present[edit]

Jacques Demy Jacques Demy (French: [dəmi]; 5 June 1931 – 27 October 1990) was one of the most approachable filmmakers to appear in the wake of the French New Wave. Uninterested in the formal experimentation of Alain Resnais, or the political agitation of Jean-Luc Godard, Demy instead created a self-contained fantasy world closer to that of François Truffaut, drawing on musicals, fairytales and the golden age of Hollywood. Career[edit] La Baie des Anges (The Bay of Angels, 1963), starring Jeanne Moreau, took the theme of fate further, with its story of love at the roulette tables. Subsequent films are less highly regarded, but may well be due for reappraisal: David Thomson wrote about "the fascinating application of the operatic technique to an unusually dark story" in Une chambre en ville (A Room in Town, 1982). Jacques Demy died of AIDS (information given in Agnès Varda's 2008 autobiographical movie Les Plages d'Agnès) in 1990 at age 59 and was interred in the Montparnasse Cemetery in Montparnasse.

Terrence Malick Early life[edit] Film career[edit] Malick started his film career after earning an MFA from the AFI Conservatory in 1969, directing the short film "Lanton Mills". At the AFI, he established contacts with people such as Jack Nicholson, longtime collaborator Jack Fisk, and agent Mike Medavoy, who procured for Malick freelance work revising scripts. Paramount Pictures produced Malick's second film, Days of Heaven (1978), about a love triangle that develops in the farm country of the Texas Panhandle in the early 20th century. Chris Wisniewski about Days of Heaven and The New World[17] Following the release of Days of Heaven, Malick began developing a project for Paramount, titled Q, that explored the origins of life on earth. A. Malick's sixth feature, titled To the Wonder,[32] was shot predominately in Bartlesville, Oklahoma, and a few scenes were filmed in Pawhuska, Oklahoma. Personal life[edit] As of at least 2011, Malick resides in Austin, Texas.[46] Filmography[edit] Bibliography[edit]

Claude Chabrol Claude Henri Jean Chabrol (French: [klod ʃabʁɔl]; 1930–2010) was a French film director, a member of the French New Wave (nouvelle vague) group of filmmakers who first came to prominence at the end of the 1950s. Like his colleagues and contemporaries Jean-Luc Godard, François Truffaut, Éric Rohmer and Jacques Rivette, Chabrol was a critic for the influential film magazine Cahiers du cinéma before beginning his career as a film maker. Sometimes characterized as a "mainstream" New Wave director, Chabrol remained prolific and popular throughout his half-century career.[1] In 1978, he cast Isabelle Huppert as the lead in Violette Nozière. On the strength of that effort, the pair went on to others including the successful Madame Bovary (1991) and La Ceremonie (1996). 1930–1957: Early life and journalism career[edit] 1957–1967: Early film career[edit] The most prolific of the major New Wave directors, Chabrol averaged almost one film a year from 1958 until his death.

Richard Fleischer Richard O. Fleischer (December 8, 1916 – March 25, 2006) was an American film director. Early life[edit] Fleischer was born in Brooklyn, the son of Essie (née Goldstein) and animator/producer Max Fleischer.[1] After graduating from Brown University, he went to Yale School of Drama, where he met his future wife, Mary Dickson.[2] His film career began in 1942 at the RKO studio, directing shorts, documentaries, and compilations of forgotten silent features, which he called "Flicker Flashbacks". Career[edit] Fleischer was chairman of Fleischer Studios, which today handles the licensing of Betty Boop and Koko the Clown. Death and legacy[edit] He died in his sleep at age 89, after having been in failing health for the better part of a year. Fleischer's 1993 autobiography, Just Tell Me When to Cry, described his many difficulties with actors, writers and producers. Japanese film director Kiyoshi Kurosawa expresses admiration for Fleischer.[4] Filmography[edit] Source:[5] Accolades[edit] Wins Nominations