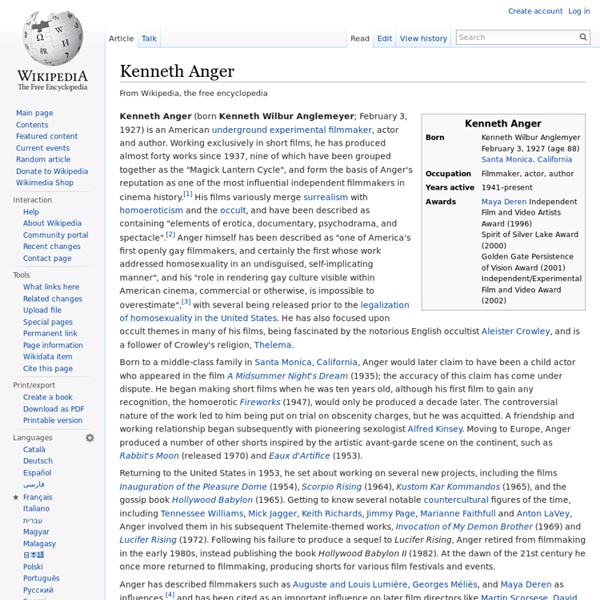 Marco Ferreri Marco Ferreri (11 May 1928 – 9 May 1997) was an Italian film director, screenwriter and actor, who began his career in the 50s directing three films in Spain. §Biography[edit] He was born in Milan. His best known film is La Grande Bouffe, starring Marcello Mastroianni, Michel Piccoli, Philippe Noiret and Ugo Tognazzi. He was an atheist.[1] He died in Paris of a myocardial infarction. §Partial filmography[edit] §Director[edit] §Screenwriter[edit] §Actor[edit] §See also[edit] Spanish cinema §References[edit] §External links[edit]

Occult Knowledge of the hidden or the paranormal The term occult sciences was used in 16th-century Europe to refer to astrology, alchemy, and natural magic, which today are considered pseudosciences. The term occultism emerged in 19th-century France,[1] where it came to be associated with various French esoteric groups connected to Éliphas Lévi and Papus, and in 1875 was introduced into the English language by the esotericist Helena Blavatsky. Throughout the 20th century, the term was used idiosyncratically by a range of different authors, but by the 21st century was commonly employed – including by academic scholars of esotericism – to refer to a range of esoteric currents that developed in the mid-19th century and their descendants. Use of the term as a nominalized adjective has developed especially since the late twentieth century. Etymology[edit] The earliest known usage of the term occultism is in the French language, as l'occultisme. Occult sciences[edit] Occult qualities[edit] Notes[edit]

Jesús Franco Jesús "Jess" Franco (born Jesús Franco Manera; 12 May 1930 – 2 April 2013) was a Spanish film director, writer, composer, cinematographer and actor. Franco started out in 1954 as an assistant director in the Spanish film industry, performing many tasks including composing music for some of the films as well as co-writing a number of the screenplays. He assisted a number of well-known directors such as Joaquin Marchent, Leon Klimovsky and Juan Antonio Bardem. In 1961, Franco took his producer to a cinema to see the newly-released Hammer horror film The Brides of Dracula and the two decided to get into the horror film genre. After discovering the beautiful Soledad Miranda (he first used her in his Count Dracula), Franco moved from Spain to France in 1969 so that he could make more violent and erotic films, and it was at this point that his career began to go downhill commercially, as he turned to low-budget filmmaking with a move to more adult films. Biography[edit] Death[edit]

Tattva vision Subject related to ESP Tattvas in isolation and combination Tattva vision is a technique developed by the Hermetic Order of the Golden Dawn to aid with the development of the faculty of astral clairvoyance.[1] They were derived from the elements or tattvas of Hindu philosophy and the Vedantic doctrine of pancikarana, as interpreted by the Golden Dawn.[further explanation needed] Tattva symbols[edit] The astral forms of the tattvas and equivalent in Western elements:[2] Constructing tattva cards[edit] Tattva cards can be constructed by cutting the tattva symbols out of coloured paper or card, and pasting on to small cards of about 6 inches by 6 inches in size. See also[edit] References[edit] Bibliography[edit] External links[edit] Cary Fukunaga Early life[edit] Fukunaga was born in Oakland, California, the son of a third generation Japanese-American father born in a Japanese internment camp during World War II,[6] who worked for a generator company and later for the University of California, Berkeley; and a Swedish mother,[7][8] who worked as a dental hygienist and later as a history teacher.[9] His parents divorced and remarried, his father to an Argentine woman, and his mother to a Mexican-American.[7] Fukunaga said that his uncles and aunts are all elementary school teachers or scientists.[9] Fukunaga said that his family has always been a "conglomeration of individual, sort of displaced people," recombinations of relatives and step-relatives, blood kin and surrogate kin, parents and what he calls "pseudo-parents" who treated him like a son.[7] His family moved around a lot within the San Francisco Bay Area; moving to Berkeley, Albany, Vallejo, Benicia, Sebastopol and back to Oakland.[8] Career[edit] Short films[edit]

Talisman Object believed to contain certain magical impacts A talisman is any object ascribed with religious or magical powers intended to protect, heal, or harm individuals for whom they are made. Talismans are often portable objects carried on someone in a variety of ways, but can also be installed permanently in architecture. Talismans are closely linked with amulets, fulfilling many of the same roles, but a key difference is in their form and materiality, with talismans often taking the form of objects (eg., clothing, weaponry, or parchment) which are inscribed with magic texts.[1] Talismans have been used in many civilizations throughout history, with connections to astrological, scientific, and religious practices; but the theory around preparation and use has changed in some cultures with more recent, new age, talismanic theory. Etymology[edit] Christian talisman (Breverl), 18th century Preparation of talismans[edit] New Age[edit] Islam[edit] Uses of talismans[edit] Islam[edit] Examples[edit]

Abel Ferrara Early life[edit] Ferrara was born in the Bronx of Italian and Irish descent.[3] He was raised Catholic, which had a later effect on much of his work.[4] At 15 he moved to Peekskill in Westchester, New York. He attended the film conservatory at SUNY Purchase, where he directed several movies, which are all available on "The Short Films of Abel Ferrara" collection. Soon finding himself out of work, he directed a pornographic film titled 9 Lives of a Wet Pussy in 1976,[5] which starred his then-girlfriend. Early career[edit] Ferrara first drew a cult audience with his grindhouse movie The Driller Killer (1979), an urban slasher in the mold of Taxi Driver (1976), about an artist (played by Ferrara himself under the alias Jimmy Laine) who goes on a killing spree with a drill in hand. Later career[edit] Personal life[edit] Ferrara lives in Rome. Filmography[edit] Recurring collaborators[edit] References[edit] External links[edit]