<--> Racoon. Red Cardnil. Chimpunk. Frog. Rabbit. <--> Great Smoky Mountains National Park. History[edit] Before the arrival of European settlers, the region was part of the homeland of the Cherokees. 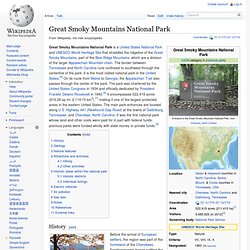 Frontierspeople began settling the land in the 18th and early 19th century. In 1830 President Andrew Jackson signed the Indian Removal Act, beginning the process that eventually resulted in the forced removal of all Indian tribes east of the Mississippi River to what is now Oklahoma. Many of the Cherokee left, but some, led by renegade warrior Tsali, hid out in the area that is now the Great Smoky Mountains National Park. Some of their descendants now live in the Qualla Boundary to the south of the park. Streams flow throughout much of the park. The Carlos Campbell Overlook is named for a Knoxville, Tennessee businessman who pushed for the establishment of the national park. It was also a site for filming of parts of Disney's hit 1950s TV series, Davy Crockett, King of the Wild Frontier. A 75th anniversary re-dedication ceremony was held on September 2, 2009. 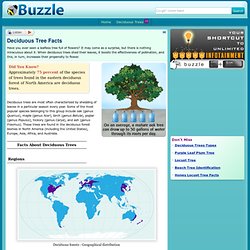 Approximately 75 percent of the species of trees found in the eastern deciduous forest of North America are deciduous trees. Deciduous trees are most often characterized by shedding of leaves in a particular season every year. Some of the most popular species belonging to this group include oak (genus Quercus), maple (genus Acer), birch (genus Betula), poplar (genus Populus), hickory (genus Carya), and ash (genus Fraxinus). These trees are found in the deciduous forest biomes in North America (including the United States), Europe, Asia, Africa, and Australia. 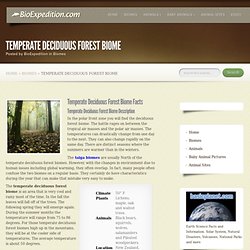 The battle rages on between the tropical air masses and the polar air masses. The temperatures can drastically change from one day to the next. They can also change rapidly on the same day. There are distinct seasons where the summers are warmer than in the winters. The taiga biomes are usually North of the temperate deciduous forest biomes. Temperate Deciduous Forest Biome Facts. <--> 47265 Weather Forecast and Conditions. Deciduous areas in the world. Spring/Summer. Fall. Winter. <--> Fern. Poison Ivy. Poison Oak. Pine Tree. Fur Tree.