SmithsonianEnv sur Twitter : "Earth has more than 3 trillion trees, @yale estimates w/ @stri_panama #ForestGEO data. World Has Many More Trees Than Previously Thought, New Report Says. There are slightly more than three trillion trees in the world, a figure that dwarfs previous estimates, according to the most comprehensive census yet of global forestation. 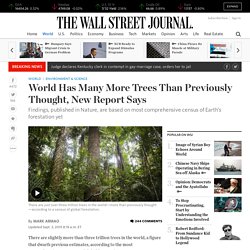 Using satellite imagery as well as ground-based measurements from around the world, a team led by researchers at Yale University created the first globally comprehensive map of tree density. Their findings were published in the journal Nature on Wednesday. A previous study that drew on satellite imagery estimated that the total number of trees was about 400 billion. Rainforest Alliance sur Twitter : "This man has dedicated his life to responsible #forestry @DomtarPaper @Guardian #FollowTheFrog. The faces of forest landowners: meet an Arkansas tree farmer. Across North America, forests provide important benefits. 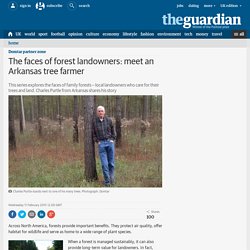 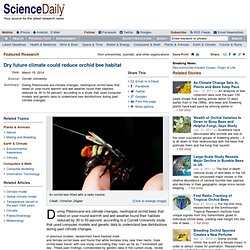 In previous studies, researchers have tracked male and female orchid bees and found that while females stay near their nests, male orchid bees travel, with one study concluding they roam as far as 7 kilometers per day. These past findings, corroborated by genetic data in the current study, reveal that males are more mobile than females. The study, published online in the journal Molecular Ecology, has important implications for future climate changes.

TransCanada weighs next steps after U.S. court's Keystone ruling. Small Nebraska agency might further complicate Keystone fight. By Ayesha Rascoe WASHINGTON (Reuters) - A small Nebraska state commission that has never considered a major oil pipeline route could soon play a pivotal role in deciding the fate of the Keystone XL pipeline, a project brimming with political risk for both the U.S. and Canadian governments. 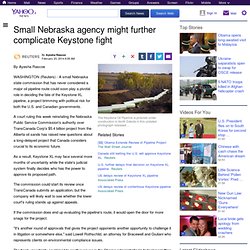 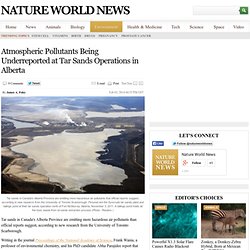 Writing in the journal Proceedings of the National Academy of Science, Frank Wania, a professor of environmental chemistry, and his PhD candidate Abha Parajulee report that carcinogenic pollutants known as polycyclic aromatic hydrocarbons (PAHs) are being underreported. Yellowstone Grizzlies Under Threat. Yellowstone's Grizzly bears are facing multiple threats, writes Anna Taylor - from proposals to remove their protection under the US Endangered Species Act, and shortages of key foods caused by climate change. 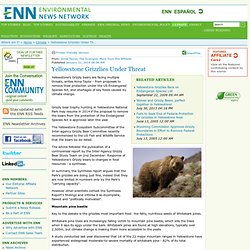 Grizzly bear trophy hunting in Yellowstone National Park may resume in 2014 if the proposal to remove the bears from the protection of the Endangered Species Act is approved later this year. Www.citizen-times. Natural Gas Boom Cuts Into Pennsylvania's State Forests. EPA proposes reduction in 2014 ethanol blend volume: documents. Government-exploring-the-possibility-of-culling-badgers-by-gas-8872673. Email : Webview. Federal judge agrees to halt oil-field megaloads in Idaho for now. Originally published September 13, 2013 at 11:28 AM | Page modified September 13, 2013 at 11:29 AM BOISE — A federal judge Friday blocked giant oil-field equipment from moving on a winding Idaho highway toward Canada’s tar sands, a victory for the Nez Perce Tribe and environmentalists seeking to force energy companies to use another route. 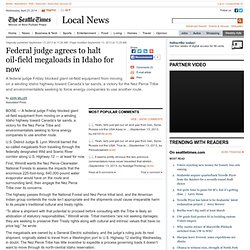 U.S. District Judge B. Pebble Mine project in Alaska is on the ropes. The future of the controversial Pebble Mine, which could excavate 186 square miles [PDF] of pristine Alaskan terrain, is now very much up in the air. 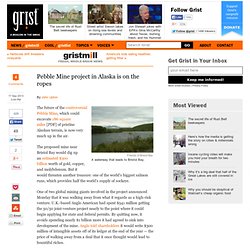 U.S. Becomes Largest Wood Pellet Exporter, Clearcutting Forests and Destroying Wetlands. Natural Resources Defense Council By Debbie Hammel When you think about burning wood to heat your home, you might imagine a cozy fireplace, not a giant power plant. 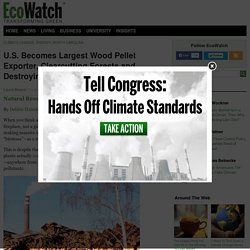 Unfortunately, utility companies in Europe are making massive investments to convert their power plants to burn wood—known as “biomass”—as a replacement for coal and other fossil fuels. This is despite the fact that recent research shows that burning whole trees in power plants actually increases carbon emissions relative to fossil fuels for many decades—anywhere from 35 to 100 years or more. It also emits higher levels of multiple air pollutants. Official Badger Cull Underway in England : Animals. Aug 27, 2013 05:13 PM EDT Over the next six weeks as many as 5,000 badgers will be killed across England as part of a test program intended to seek the most effective and humane way to cull the animals, which have been linked to spreading the disease bovine tuberculosis. 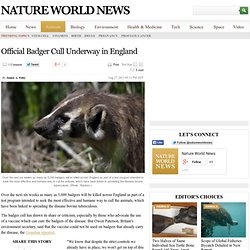 National - Sophie Quinton - As Politicians Debate Climate Change, Our Forests Wither. North America is witnessing the largest pine-beetle epidemic in recorded history. Temperature rises are more than likely to blame, but why is it so hard to admit that? A Mountain Pine beetle is seen during the examination of trees in the White River National Forest near Vail, Colorado. Shady Dell deal preserves majestic redwood forest. Fort Bragg -- - On a steep hillside along the spectacularly rugged Mendocino County coast, is an 11-acre grove of ancient redwood trees with twisted trunks and branches that shoot out wildly in all directions as if frozen in the middle of a conniption fit. The contorted trees, most of which are 500 years old, survived only because their bent wood could not be turned into lumber, and they are a biological gold mine to conservationists.

The grove of "candelabra" redwoods, known as the Enchanted Forest, is one of the primary reasons San Francisco's Save the Redwoods League purchased the spectacular 957-acre piece of coastline known as Shady Dell, where the gnarled old trees live. "This is an example of redwoods responding to the environment - the coastal wind," Emily Limm, the league's director of science, said as she stood under a huge branch jutting sideways out from the trunk. In the Wild, Seeking an Answer: What Replaces Dying Trees? Lauren E.