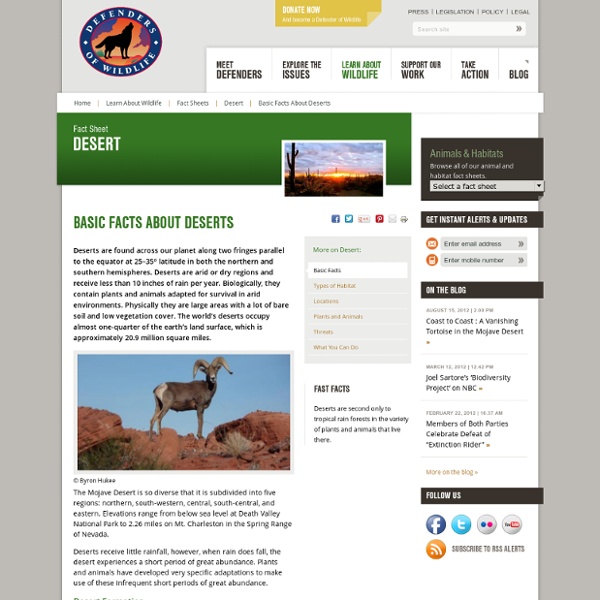 Deserts Far from being barren wastelands, deserts are biologically rich habitats with a vast array of animals and plants that have adapted to the harsh conditions there. Some deserts are among the planet's last remaining areas of total wilderness. Yet more than one billion people, one-sixth of the Earth's population, actually live in desert regions. Deserts cover more than one fifth of the Earth's land, and they are found on every continent. And despite the common conceptions of deserts as dry and hot, there are cold deserts as well. Desert animals have adapted ways to help them keep cool and use less water. Desert plants may have to go without fresh water for years at a time. Some of the world's semi-arid regions are turning into desert at an alarming rate. Global warming also threatens to change the ecology of desert.

Deserts 1 Sure, our planet looks like a watery blue marble from space, but one-third of Earth’s land surface is partially or totally desert. 2 The world’s largest desert is Antarctica. That’s right, an area doesn’t have to be hot to qualify—it just needs to lose more moisture than it gains. 3 There are parts of the Atacama Desert in Chile where no rain has ever been recorded. Scientists believe portions of the region have been in an extreme desert state for 40 million years—longer than any other place on Earth. 4 And yet more than 1 million people live in the Atacama today. 5 If you get lost in the desert, you don’t have to urinate on your shirt and wear it on your head like Bear Grylls to avoid dying of thirst. 6 Contrary to lore, cacti are not a sure thing. 7 Then again, if you are lost in the desert, headaches and diarrhea might not be your biggest problem. 8 You’re better off with a prickly pear cactus. 12 Workers on the highway occasionally stumble across dehydrated corpses.

desert habitat Information on Desert Climates Deserts represent one-fifth (20%) of the land surface of the world. The majority of deserts are in the Arabian Peninsula, Australia, The Americas, North and South Africa, India and Pakistan. The largest desert is the Sahara, in North Africa, and is about 3,500,000 square miles. Deserts are characterized by extreme heat and dryness, very hot in the daytime and chilly or even cold at night. The average temperature is 100 degrees during the day and below 50 degrees at night. The wettest desert does not get more than 10 inches of rain a year. A variety of plant and animal species live there, thanks to their power to adapt to the harsh environment. Animals like rattlesnakes and scorpions spend most of the day underground but come out at night to eat and hunt. Spade foot toads spend 9 months of the year underground. Deserts often get their names like "Death Valley" or "The place from where there is no return" because of their extreme conditions.

Note American Desert Biomes - Desert Environments - World Desert Biomes Deserts cover more than one fifth of the Earth's land, and they are found on every continent. Deserts can be classified as "hot" or "cold". Deserts receive less than 10 inches of precipitation a year. Lack of water creates a survival problem for all desert organisms, animals, plants and people. What is a desert? Desert In Bloom Plants and Animals: How Are They Classified? Desert Food Chain Video Videos of Desert Animals Other DesertUSA Resources

picture of habitat aniamal note snake The desert only gets 10 inches of rain a year.