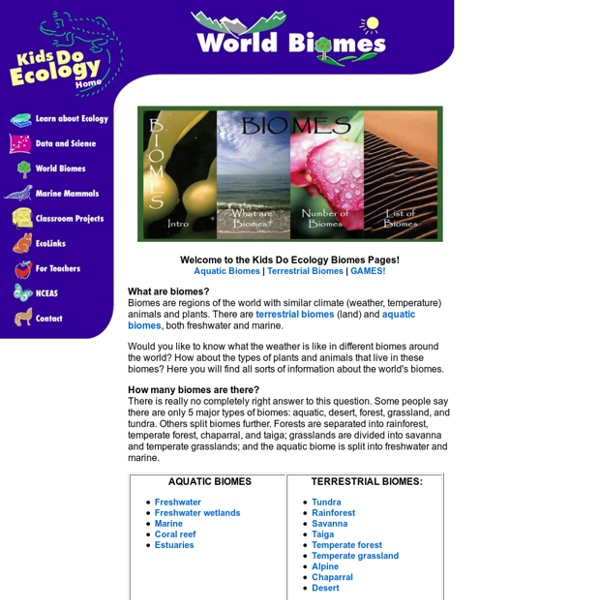 Welcome to the Kids Do Ecology Biomes Pages! Aquatic Biomes | Terrestrial Biomes | GAMES! What are biomes? Biomes are regions of the world with similar climate (weather, temperature) animals and plants. There are terrestrial biomes (land) and aquatic biomes, both freshwater and marine. Would you like to know what the weather is like in different biomes around the world? How many biomes are there? Games Links to more information: Kids Konnect: Biomes Enchanted Learning: Biomes ThinkQuest: Biomes Major Biomes of the World NASA - Mission: Biomes World Biomes Back to the top Back to Biomes Index

(k). Characteristics of the Earth's Terrestrial Biomes Chaparral, Nature's Detergent Chaparral(Creosote Bush) Chaparral is a dwarf tree or shrub generally growing 4 - 12 feet in height. It thrives in the southwestern United States and northern Mexico region. The resin on the leaves is a natural creosote, which is why this bush is also called the creosote bush.The turpenes have properties similar to turpentine, which gives it a strong taste and smell. Many refer to Chaparral as "Nature's Detergent" due to the foamy residue produced from the saponins when the leaves are shaken in water. It is known as a "cure-all" having medicinal properties that assist in the overall well-being of the body and in the healing of a variety of maladies. Chaparral boosts the immune system and helps keep the body in an alkaline state that allows it to naturally fight against infection, microbic invaders and many forms of dis-ease. Let Nature be your Ally, Natur-ally.

s National Ocean Service Education: Estuaries Estuarine habitats are typically found where rivers meet the sea. Mouse over the image to see some of the estuarine areas highlighted in this tutorial. Click on image for more details and a larger image. Estuaries are bodies of water and their surrounding coastal habitats typically found where rivers meet the sea. Estuaries are some of the most productive ecosystems in the world. Of the 32 largest cities in the world, 22 are located on estuaries (Ross, 1995). Estuaries are both beautiful and ecologically bountiful. New York City, with a population of over eight million people, is one example of a major urban area located on an estuary. Estuaries Tutorial is an overview of estuarine habitats, the threats facing them, and efforts to monitor and protect estuaries nationwide. The Roadmap to Resources complements the information in the tutorial by directing you to specific online estuary-related materials from NOAA and other reliable resources. (top)

What Are the Animals That Live in Estuary Biomes? Some fish, like the starry flounder of the Pacific Coast, spend their entire lives in estuary environments. Many others, however, like tarpon in the Gulf of Mexico, only visit estuaries to feed or to rear their young in the relatively hospitable, sheltered habitats. The great barracuda spends its early days in shallow-water estuaries, finding some refuge from marine predators. Such large fish as bull and tiger sharks also periodically enter estuaries to hunt; bull sharks, one of the few sharks able to tolerate prolonged exposure to freshwater, may track well upriver. 9(k) Characteristics of the Earth's Terrestrial Biomes Introduction Many places on Earth share similar climatic conditions despite being found in geographically different areas. As a result of natural selection, comparable ecosystems have developed in these separated areas. Scientists call these major ecosystem types biomes. The geographical distribution (and productivity) of the various biomes is controlled primarily by the climatic variables precipitation and temperature. Most of the classified biomes are identified by the dominant plants found in their communities. The diversity of animal life and subdominant plant forms characteristic of each biome is generally controlled by abiotic environmental conditions and the productivity of the dominant vegetation. Adaptation and niche specialization are nicely demonstrated in the biome concept. Arctic and Alpine Tundra Tundra means marshy plain. Within this biome, temperature, precipitation, and evaporation all tend to be at a minimum. Boreal Coniferous Forest Temperate Deciduous Forest Grassland

Chaparral Climate Chaparral Climate Mediterranean Climate (Cs) In the winter the Chaparral climate, also known as the Mediterranean climate, is mild and moist, but not rainy. During the summer it is very hot and dry. The temperature is usually mild but it can get very hot or nearly freezing. This biome only gets about 10-17 inches of rain all year, and most of it comes in the winter. There are many fires in the chaparral because of the heat and dryness. Chaparrals exist in a mid-latitude climate and lie in a belt of prevailing westerly winds. Chaparrals can be found from 30° to 50° N and 30° to 40° S latitudes. bibliography: "Chaparral", New Book of Knowledge 1998 ed. "Climate Zones", Encarta CD-Rom Encyclopedia, (Microsoft Corporation) 1995 ed. "Chaparral Climates", New Book of Knowledge, 2000 ed. Mediterranean Chaparral Mediterranean Climate (Cs) The Mediterranean chaparral has a very interesting climate. The vegetation is mostly made up of shrubs. The fauna is very interesting. by Sarah Nelson, 2001

Estuary An estuary is a partly enclosed coastal body of brackish water with one or more rivers or streams flowing into it, and with a free connection to the open sea.[1] Estuaries form a transition zone between river environments and maritime environments and are subject to both marine influences, such as tides, waves, and the influx of saline water; and riverine influences, such as flows of fresh water and sediment. The inflows of both sea water and fresh water provide high levels of nutrients in both the water column and sediment, making estuaries among the most productive natural habitats in the world.[2] Definition[edit] The word "estuary" is derived from the Latin word aestuarium meaning tidal inlet of the sea, which in itself is derived from the term aestus, meaning tide. Classification based on geomorphology[edit] Drowned river valleys[edit] Their width-to-depth ratio is typically large, appearing wedge-shaped in the inner part and broadening and deepening seaward. Fjord-type[edit]

biome Chaparral Biome - Facts and Information - The Portal of Life The chaparral biome is one that is found in areas of every single continent. However, many people don’t realize it is the same. That is because there are several different types of terrain that this particular biome is associated with. In some areas they are flat plains but in other regions there are hills. Still yet, others consist of mountain terrain areas. They really are lovely areas with lots to offer. A chaparral biome is created when cool water from an ocean merges with a landmass that is at a high temperature. With a chaparral biome you will find that there is a very wet winter and also a very dry summer. These fires are usually the result of lightning striking in the area. The fact that many homes have been built on the edges of these biomes such as in California, it can be a huge threat when such fires break out. What is interesting is that many of the plants found in the chaparral biome have leaves that are made from highly flammable materials. Chaparral Biome Characteristics

Estuaries and Coastal Watersheds | Estuaries and Coastal Watersheds National Estuary Program (NEP) Overview A study* found the networks in NEP areas span more levels of government, integrate more experts into policy discussions, nurture stronger interpersonal ties between stakeholders, and create greater faith in the procedural fairness of local policy than other comparable estuaries. *Building Consensual Institutions: Networks and the National Estuary Program, M. Schneider et. al., American Journal of Political Science, Vol. 47. No 1, January 2003 The NEP was established under Section 320 of the 1987 Clean Water Act (CWA) Amendments as a U.S. Each NEP has a Management Conference (MC) made up of diverse stakeholders including citizens, local, state, and Federal agencies, as well as with non-profit and private sector entities. Currently there are 28 estuaries located along the Atlantic, Gulf, and Pacific coasts and in Puerto Rico that have been designated as estuaries of national significance. National Estuary Program Information Conditions Table of Contents