(4) Hugh Hou – Posts. NASA’s Curiosity Has Been On Mars For More Than 7 Years And Here Are Its 30 Best Photos. For us, mere mortals, Mars is a no man's land where survival seems like a distant dream. 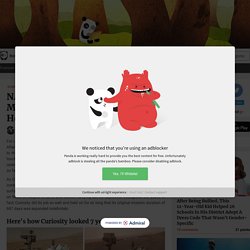 After all, no man has ever walked on its surface (as far as we know) and plans to send one to the red planet are only in the early stages of its development. However, humans have touched Mars through the durable wheels of Mars rovers. We've had 4 successful robotically operated Mars rovers (all of which were managed by the Jet Propulsion Laboratory, NASA) so far: Sojourner, Opportunity, Spirit, and Curiosity.

As Opportunity's mission was declared complete on February 13, 2019 when NASA lost all contact with the vehicle, Curiosity became the lone survivor on the red planet, rolling over its surface to examine and explore the unknown land all by itself. The spacecraft first landed on Mars on August 6, 2012 and started carrying out its objectives throughout the years. Here's how Curiosity looked 7 years ago and now For us, mere mortals, Mars is a no man's land where survival seems like a distant dream. A World First: Listen to the Sounds of Mars. NASA Has Just Released 2,540 Stunning New Photos of Mars..

If it’s quiet solitude and beauty you seek, there is no better place than the surface of Mars. 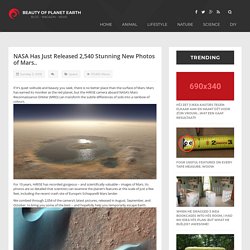 Mars has earned its moniker as the red planet, but the HiRISE camera aboard NASA’s Mars Reconnaissance Orbiter (MRO) can transform the subtle differences of soils into a rainbow of colours. For 10 years, HiRISE has recorded gorgeous – and scientifically valuable – images of Mars. Its photos are so detailed that scientists can examine the planet’s features at the scale of just a few feet, including the recent crash site of Europe’s Schiaparelli Mars lander.

We combed through 2,054 of the camera’s latest pictures, released in August, September, and October, to bring you some of the best – and hopefully help you temporarily escape Earth. NASA/JPL/University of Arizona A large chasm: Some dark, rust-colored dunes in Russell Crater: NASA might land its next nuclear-powered Mars 2020 rover mission here. The black splotch is where the European Space Agency’s Schiaparelli Mars lander crashed. Zebra skin. NASA has released more than 2,500 images of Mars, and I can't stop staring. No seriously, these images are so beautiful it’s actually hard to not look at them for a few minutes straight. 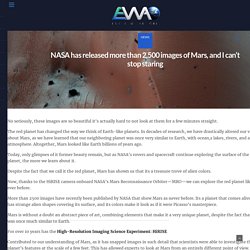 Not as Red as we thought: NASA publishes colorful images of Mars. The product of the High-Resolution Imaging Science Experiment (HiRISE) camera installed on the Mars Orbiter, stunning images show the Red Planet as you’ve never imagined it before. 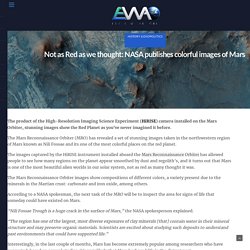 The Mars Reconnaissance Orbiter (MRO) has revealed a set of stunning images taken in the northwestern region of Mars known as Nili Fossae and its one of the most colorful places on the red planet. The images captured by the HiRISE instrument installed aboard the Mars Reconnaissance Orbiter has allowed people to see how many regions on the planet appear smoothed by dust and regolith’s, and it turns out that Mars is one of the most beautiful alien worlds in our solar system, not as red as many thought it was.

The Mars Reconnaissance Orbiter images show compositions of different colors, a variety present due to the minerals in the Martian crust: carbonate and iron oxide, among others. “Nili Fossae Trough is a huge crack in the surface of Mars,” the NASA spokesperson explained. For more images visit HiRISE [mashshare] NASA has just released 2,540 gorgeous new photos of Mars. Donald Trump has been elected president, bringing to a close one of the most contentious campaign seasons in history. 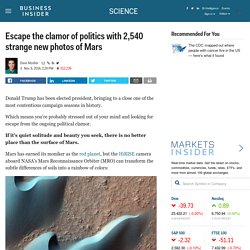 Which means you're probably stressed out of your mind and looking for escape from the ongoing political clamor. If it's quiet solitude and beauty you seek, there is no better place than the surface of Mars. See the Surprising Ways Mars Has Changed in 3 Billion Years. NASA has just released 2,540 gorgeous new photos of Mars. Farming in ‘Martian Gardens’ By Linda HerridgeNASA's John F. 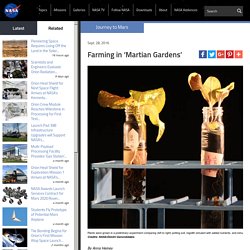 Kennedy Space Center An artist concept depicts a greenhouse on the surface of Mars. Plants are growing with the help of red, blue and green LED light bars and a hydroponic cultivation approach. Image credit: SAIC NASA plant physiologist Ray Wheeler, Ph.D., and fictional astronaut Mark Watney from the movie "The Martian" have something in common — they are both botanists.

"The Martian movie and book conveyed a lot of issues regarding growing food and surviving on a planet far from the Earth," Wheeler said. As NASA prepares the Space Launch System rocket and Orion spacecraft for Exploration Mission-1, it's also turning its attention to exploring the possibilities of food crops grown in controlled environments for long-duration missions to deep-space destinations such as Mars.

Wheeler and his colleagues, including plant scientists, have been studying ways to grow safe, fresh food crops efficiently off the Earth. Potato Crop Studies Water - A Precious Resource.