Plants have neither synapses nor a nervous system. Abstract The alleged existence of so-called synapses or equivalent structures in plants provided the basis for the concept of Plant Neurobiology (Baluska et al., 2005; Brenner et al., 2006). 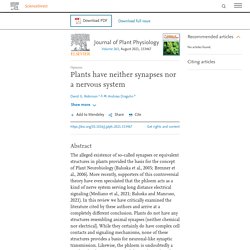 More recently, supporters of this controversial theory have even speculated that the phloem acts as a kind of nerve system serving long distance electrical signaling (Mediano et al., 2021; Baluska and Mancuso, 2021). In this review we have critically examined the literature cited by these authors and arrive at a completely different conclusion. Plants do not have any structures resembling animal synapses (neither chemical nor electrical).

While they certainly do have complex cell contacts and signaling mechanisms, none of these structures provides a basis for neuronal-like synaptic transmission. Keywords. Plants Feel Pain and Might Even See - Issue 104: Harmony - Nautilus. In 2018, a German newspaper asked me if I would be interested in having a conversation with the philosopher Emanuele Coccia, who had just written a book about plants, Die Wurzeln der Welt (published in English as The Life of Plants). 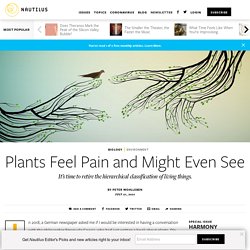 I was happy to say yes. The German title of Coccia’s book translates as “The Roots of the World,” and the book really does cover this. Food for thought? French bean plants show signs of intent, say scientists. They’ve provided us with companionship and purpose during the darkest days of lockdown, not to mention brightening our Instagram feeds. 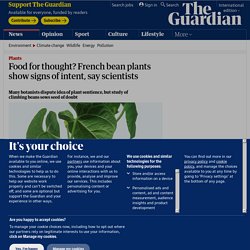 But the potted cacti, yucca, and swiss cheese plants we’ve welcomed into our homes are entirely passive houseguests. Aren’t they? Do Plants Have Personalities? This Botanist Is Looking to Prove They Do. The Valentine ecological study area in Mammoth Lakes, Calif., is situated in the caldera of an ancient volcano 8,000 feet above sea level. 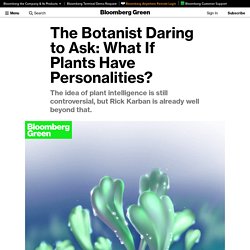 There’s no fence to keep tourists out of the 156-acre reserve owned by University of California at Santa Barbara, just a sign warning that trespassing won’t be tolerated. Most wouldn’t even know where to look; the entrance is a perimeter of scraggly pine forest with no trail through it—unappealing, compared to the ski area practically next door. Is Plant 'Intelligence' Just a Human Fantasy? Although plants make up over 80% of the biomass on Earth, for centuries they have been thought of as inanimate and passive things. 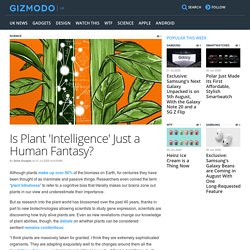 Researchers even coined the term “plant blindness” to refer to a cognitive bias that literally makes our brains zone out plants in our view and underestimate their importance. But as research into the plant world has blossomed over the past 40 years, thanks in part to new biotechnologies allowing scientists to study gene expression, scientists are discovering how truly alive plants are. Even as new revelations change our knowledge of plant abilities, though, the debate on whether plants can be considered sentient remains contentious.

“I think plants are massively taken for granted. I think they are extremely sophisticated organisms. Scientific research into plant cognition dates back to Charles Darwin, who would draw parallels between plant roots and the brain. In fact, not all academics feel comfortable drawing comparisons between humans and plants. The Hidden Memories of Plants. Monica Gagliano began to study plant behavior because she was tired of killing animals. 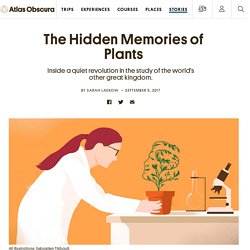 Now an evolutionary ecologist at the University of Western Australia in Perth, when she was a student and postdoc, she had been offing her research subjects at the end of experiments, the standard protocol for many animals studies. If she was to work on plants, she could just sample a leaf or a piece of root. When she switched her professional allegiance to plants, though, she brought with her some ideas from the animal world and soon began exploring questions few plant specialists probe—the possibilities of plant behavior, learning, and memory. “You start a project, and as you open up the box there are lots of other questions inside it, so then you follow the trail,” Gagliano says.

The secret life of plants: how they memorise, communicate, problem solve and socialise. I had hoped to interview the plant neurobiologist Stefano Mancuso at his laboratory at the University of Florence. 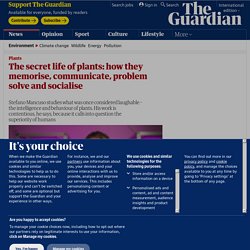 I picture it as a botanical utopia: a place where flora is respected for its awareness and intelligence; where sensitive mimosa plants can demonstrate their long memories; and where humans are invited to learn how to be a better species by observing the behaviour of our verdant fellow organisms. But because we are both on lockdown, we Skype from our homes. PLANT-CAPITAL: Objectification and Agency in a Consumerist World. Never Underestimate the Intelligence of Trees - Issue 77: Underworlds  Consider a forest: One notices the trunks, of course, and the canopy. 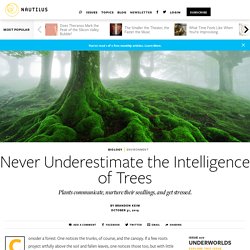 If a few roots project artfully above the soil and fallen leaves, one notices those too, but with little thought for a matrix that may spread as deep and wide as the branches above. What a plant learns. The curious case of Mimosa pudica. Wandering through the Royal Botanic Gardens in Kew, renowned for housing one of the most diverse collection of living plants on the planet, you can be sure to fall under the spell of its notorious residents. 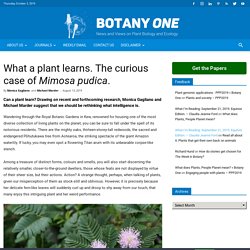 There are the mighty oaks, thirteen-storey-tall redwoods, the sacred and endangered Pōhutukawa tree from Aotearoa, the striking spectacle of the giant Amazon waterlily. If lucky, you may even spot a flowering Titan arum with its unbearable corpse-like stench. Among a treasure of distinct forms, colours and smells, you will also start discerning the relatively smaller, closer-to-the-ground dwellers, those whose feats are not displayed by virtue of their sheer size, but their actions. Plants are intelligent, here’s how. American Journal of Botany. Botanists Say Plants Are Not Conscious. Opinion: Plants neither possess nor require consciousness (TIPS) Poems: by William Cowper, of the Inner Temple, Esq. Trapped in time: Lingering with “Plantness” - Sanders - - PLANTS, PEOPLE, PLANET - Wiley Online Library. In modern urban existence, the complex lives of plants are often reduced to simplistic categories, which resonate with human utility; as Jahren (2016) noted: “Human civilization has reduced the plant, a four‐hundred‐million‐year‐old life form, into three things: food, medicine and wood” (p. 279). 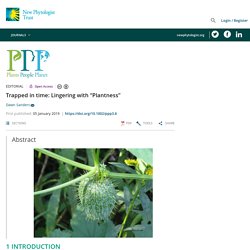 HPW Retrospectacles 2018 – March – How Plants Work. 3 (CC BY-SA 2.0) by various brennemans From “Talking” Trees To The Origin of Plant Hormones. The plant science news of March 2018 began with a recent (but a somewhat unfortunate, in my view) trend of mysticism somehow creeping into scientific studies of plant physiology. (Think plant consciousness. How do plants read their own shapes? - Hamant - 2016 - New Phytologist. Abstract Summary Although the sensing of shape and deformation was historically involved in the control of animal locomotion, it is now increasingly being incorporated in developmental biology. Proprioception, the perception of the self, is particularly key to the question of the reproducibility of shapes: the many regulators of growth may lead to a large array of geometries, but shape sensing restricts these diverse outputs to a limited number of forms. Mechanistically, and in addition to geometrical feedback onto the diffusion and transport of molecular factors, we highlight the role of shape-derived mechanical stress and strain in this process.

Through examples at the cell, tissue and organism scales, it appears that such mechanical feedback adds robustness to morphogenesis. I. Feeling one's own shape, or ‘proprioception’, has very important functional implications in physiology, and was first described for animal locomotion and posture control. II. Box 1. III. IV. Sedate a Plant, and It Seems to Lose Consciousness. Is It Conscious? Can Plants "Hear" Running Water? — In Defense of Plants. The peas were allowed to grow for five days and afterwards were checked to see which direction their roots were growing. Amazingly, the peas seemed to be able to distinguish the sound of actual running water even when there was no moisture gradient present. Peas given the option of sitting or running water in a tube grew their roots towards the tube a majority of the time. Again, this was in the absence of any sort of water gradient in order to eliminate the chances that the peas were simply honing in on humidity.

Interestingly, plants that were played the sound of running water and white noise through speakers seemed to do what they could to avoid the noise. Although the research did not investigate why the peas had an aversion to the recordings, Dr. BBC Radio 4 - The Life Scientific, Ottoline Leyser on how plants decide what to do. Untitled. Harvard John A. Paulson School of Engineering and Applied Sciences. It is well known that as plants grow, their stems and shoots respond to outside signals like light and gravity. But if plants all have similar stimuli, why are there so many different stem shapes? Why does a weeping willow grow downwards while nearby poison ivy shoots upwards? Using simple mathematical ideas, researchers from the Harvard John A. Paulson School of Engineering and Applied Sciences (SEAS) constructed a framework that explains and quantifies the different shapes of plant stems.

Plant-Perceiving Is Plant-Thinking. There is nowadays a growing scientific consensus that plants are capable of sensing variations in their environment, from changes in light to humidity gradients, from gravitropism—or the pull of gravity determining the upward growth of shoots and the downward extension of roots—to varieties of touch. Rousseau’s Walnut and Willow Trees. Lucas Reiner, On Alameda Ave. #1 (SCF). Commissioned by the Annenberg Foundation/Farmlab LLC. Visionary plants - AoBBlog. Stefano Mancuso: The roots of plant intelligence. The Plant Intelligence Project. 20 Dec “Try instead to think like them … phytomorphize ourselves” News of plants’ communicative activities continues to be news this month in this week’s front page story at Quanta Magazine republished today on Wired.com. Thinking like a vegetable: how plants decide what to do. Plants Talk. Plants Listen. Here's How : Krulwich Wonders... They don't have eyes. Or ears.

Or what we would call a nervous system. How Plants Secretly Talk to Each Other. Up in the northern Sierra Nevada, the ecologist Richard Karban is trying to learn an alien language. The sagebrush plants that dot these slopes speak to one another, using words no human knows. The Mental Life of Plants and Worms, Among Others by Oliver Sacks. The flowering of plant bioacoustics: how and why. Monica Gagliano + Author Affiliations Address correspondence to M. Gagliano. E-mail: monica.gagliano@uwa.edu.au. In a green frame of mind: perspectives on the behavioural ecology and cognitive nature of plants. Monica Gagliano* Plants Can Tell When They're Being Eaten. By Dan Nosowitz on October 20, 2014. Are plants more intelligent than we assumed?

Press release, 04th March 2014: RESOURCES - Plant Signaling and Behavior. No Face, but Plants Like Life Too. Los Angeles Review of Books - What Is Plant-Thinking?: Botany’s Copernican Revolution. Do plants have their own form of conciousness? If Peas Can Talk, Should We Eat Them? Swiss 'dignity' law is threat to plant biology. 8th Annual Year in Ideas - Plants’ Rights.