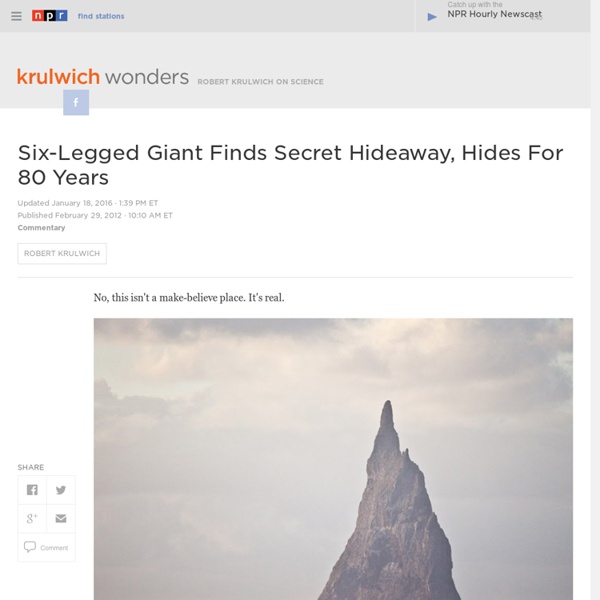 No, this isn't a make-believe place. It's real. They call it "Ball's Pyramid." It's what's left of an old volcano that emerged from the sea about 7 million years ago. A British naval officer named Ball was the first European to see it in 1788. What's more, for years this place had a secret. A satellite view of Ball's Pyramid in the Tasman Sea off the eastern coast of Australia. toggle caption Google Maps Here's the story: About 13 miles from this spindle of rock, there's a bigger island, called Lord Howe Island. On Lord Howe, there used to be an insect, famous for being big. Then one day in 1918, a supply ship, the S.S. Totally gone. There was a rumor, though. Some climbers scaling Ball's Pyramid in the 1960s said they'd seen a few stick insect corpses lying on the rocks that looked "recently dead." Climbing The Pyramid Fast forward to 2001, when two Australian scientists, David Priddel and Nicholas Carlile, with two assistants, decided to take a closer look. That wasn't so easy. Related:  Insects & Arachnids • Bugs

Egyptian Giant Solpugids (Camel Spider) Camel spiders became an Internet sensation during the Iraq war of 2003, when rumors of their bloodthirsty nature began to circulate online. Many tales were accompanied with photos purporting to show spiders half the size of a human. For many years, Middle Eastern rumors have painted camel spiders as large, venomous predators, as fast as a running human, with a voracious appetite for large mammals. The camel spider's history of misinformation begins with a misidentification. Camel spiders, also called wind scorpions and Egyptian giant solpugids (SAHL-pyoo-jids), are only about 6 inches (15 centimeters) long. Camel spiders are not deadly to humans (though their bite is painful), but they are vicious predators that can visit death upon insects, rodents, lizards, and small birds.

Priotrochatella: Beautiful Cuban Land SnailWonderful World Pics Priotrochatella is a genus of land snails with an operculum, terrestrial gastropod mollusks in the family Helicinidae. ref wikipedia. There are three species reported within the genus Priotrochatella in Cuba, all from the Isle of Pine. Priotrochatella constellata (Morelet, 1847), Priotrochatella stellata (Velazquez in Poey, 1852), and Priotrochatella torrei Clapp, 1918. See photos below! Priotrochatella constellata (Morelet, 1847) Priotrochatella stellata (Velazquez in Poey, 1852) Priotrochatella torrei Clapp, 1918 FEI Image Contest 2013 Puts Amazing Electron Microscope PHOTOS In Spotlight Viewing something through an electron microscope may feel as if you're viewing it for the first time. The incredible instrument offers a close-up glimpse of whatever you choose to look at -- even tiny, everyday things, such as insects, crystals, and germs. Each year scientific instruments company FEI holds a contest to showcase such images -- and a call for submissions in the 2013 photo contest already went out. The company is partnering with National Geographic on the contest, and also on a film titled " Mysteries of the Unseen World ." Below, check out some images that were submitted this month. Loading Slideshow Beetle Head A frontal view of a myrmecophilous ground beetle with the antennae removed. Also on HuffPost:

The snake whose bite can send you back through puberty I'm sorry but I have to get on my soap box for just a sec...ahem* In response to your statement regarding snake and their bites killing people in the second paragraph, "That's unpleasant, but we already knew that about most snake bites. " As a conservationist, nature boy, amateur herpetologist and all-around good guy, I must protest the implication in that sentence. Most snakes are not venomous and most snake bites are hence harmless. In fact, most snake bites are a result of unnecessary contact, agitation or improper (and needless) handling. I hate that snakes get such a bad rap, and let's face it, it's mostly because of their appearance that they've been demonized in various cultures and histories...also because we have an evolutionary response to be creeped out by potentially harmful forms (spiders, snakes, bright red berries). Anywho, my point is to give snakes a chance, folks.

Tinkerbella nana The family Mymaridae includes more than 1,400 species of diminutive insects called fairyflies. They are not flies at all, but tiny wasps that deposit their eggs inside the eggs of other insects. Most of these parasitoids are found in tropical latitudes and the southern hemisphere, where they attack unborn offspring of true bugs, beetles, flies, barkflies and dragonflies. The common name fairyfly was no doubt inspired by the small size, delicate form and wispy wings with long posterior fringes. A new species of fairyfly, Tinkerbella nana, has been described by John T Huber of Natural Resources Canada and John S Noyes of London's Natural History Museum. Fossils of Meganeuridae , giant dragonfly-like insects from the carboniferous period 300 million years ago, have sparked a number of debates over the upper size limits of insects, often attributed to oxygen concentrations in the atmosphere. So how small can an insect be?

Why do women menstruate? Menstruation is a peculiar phenomenon that women go through on a roughly monthly cycle, and it’s not immediately obvious from an evolutionary standpoint why they do it. It’s wasteful — they are throwing away a substantial amount of blood and tissue. It seems hazardous; ancestrally, in a world full of predators and disease, leaving a blood trail or filling a delicate orifice with dying tissue seems like a bad idea. One assumption some people might make is that that is just the way mammalian reproduction works. Phylogeny showing the distribution of menstruation in placental mammals and the inferred states of ancestral lineages. I suppose we could blame The Curse on The Fall, but then this phylogeny would suggest that Adam and Eve were part of a population of squirrel-like proto-primates living in the early Paleocene. There are many explanations floating around. A new paper by Emera, Romero, and Wagner suggests an interesting new idea. That’s a hint. Bonus! (Also on Sb) P.S.

Whip Scorpion We've seen the elegant Scorpion with their often rather dainty pincers, now let's see their relatives, the chunky Whip Scorpions with their own brutal, barbarous claws. Whip Scorpions, also known oddly as Vinegaroons, are indeed arachnids with thick, hefty bodies. Most of them are 3 cm (1.2 in) long or a bit under, but the biggest ones can reach 8.5 cm (3.3 in). But check out those claws! With these they can grapple with small insect and millipede prey, though the bigger ones can also catch small vertebrates. Whatever the prey, the Whip Scorpion simply grabs it and crushes and mushes it in those formidable pincers. Like the Scorpion, the Whip Scorpion cares for her eggs and carries her young on her back. Young Whip Scorpions take about 3 years to reach adulthood, after which they have about 4 more years of life left in them.

Bioelectromagnetics: Bees, Flowers Communicate Using Electrical Fields Did you know that flowers and bees communicate with one another about the amount and quality of pollen available using bioelectromagnetics? In a recent study from the University of Bristol and published in Science Express, scientists put electromagnetic detectors in flowers’ pollinators to watch the great romance of spring and determine if electrical signals given off by both bee and flower aided in communication. They also watched bee behavior to observe some interesting findings. What scientists discovered is that flowers tell bees specific information, including how much pollen they have, if another bee has visited them recently, and what type of flower they are. Flowers and bees communicate effectively to aid bees in the work they do. Researchers at the University of Bristol also discovered that bumblebees can distinguish different types of flowers with more discernment utilizing floral electric fields. Related Read: Bees Hold Secret to Slowing Aging Process and ‘Reversing Time’