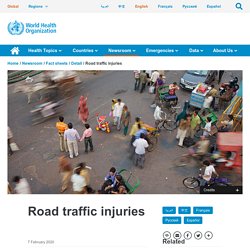 Between 20 and 50 million more people suffer non-fatal injuries, with many incurring a disability as a result of their injury. Road traffic injuries cause considerable economic losses to individuals, their families, and to nations as a whole. These losses arise from the cost of treatment as well as lost productivity for those killed or disabled by their injuries, and for family members who need to take time off work or school to care for the injured. Road traffic crashes cost most countries 3% of their gross domestic product. Who is at risk? Socioeconomic status More than 90% of road traffic deaths occur in low- and middle-income countries. [Singapore] Road Safety Situation. SINGAPORE: The general road traffic situation improved in 2019, with fewer accidents, injuries and fatalities, the Singapore Police Force (SPF) said in a news release on Monday (Feb 10). 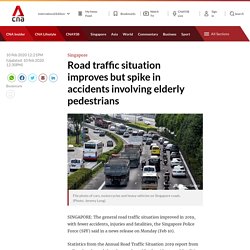 Statistics from the Annual Road Traffic Situation 2019 report from police also showed that the number of fatal accidents and fatalities fell to a record low. However, police said an increase in the number of accidents involving elderly pedestrians and motorcyclists continued to be of concern. The number of accidents and violations from speeding and red-light running also went up. Overall, the number of fatal accidents decreased by 3.3 per cent to 116 cases in 2019, from 120 cases in 2018. The number of fatalities decreased by 5.6 per cent to 117 in 2019, from 124 in 2018, the statistics showed. The road traffic fatality rate per 100,000 population decreased to 2.05 per cent in 2019, from 2.2 per cent in 2018. [United States] Road Safety Situation. [United States] Road Safety Situation. LOWER petrol prices and a healthier economy meant more people took to the roads in America last year—and more people died on them. 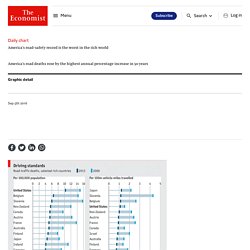 According to the National Highway Traffic Safety Administration (NHTSA), just over 35,000 people were killed in crashes in 2015. That was 7% more than in 2014, the biggest annual percentage increase since 1965. [European Union] Road Safety Situation. Compared to previous years, fewer people lost their lives on EU roads in 2019, according to preliminary figures published today by the European Commission. 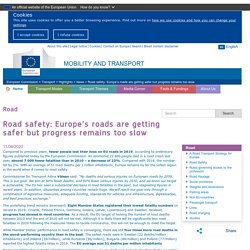 An estimated 22 800 people died in a road crash last year, almost 7 000 fewer fatalities than in 2010 – a decrease of 23%. Compared with 2018, the number fell by 2%. With an average of 51 road deaths per 1 million inhabitants, Europe remains by far the safest region in the world when it comes to road safety. Commissioner for Transport Adina Vălean said: "No deaths and serious injuries on European roads by 2050. This is our goal. The underlying trend remains downward. Road Safety Situation across the Globe. Study on Emotional Appeal to promote Road Safety. 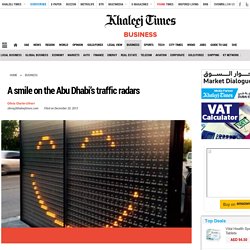 Smile, you are not on camera. — Supplied photo Positive reinforcement, such as a smile, can go a long way in effecting behavioural change. This theory, which has been proven several times, was put to test as a tool in saving lives — to reduce overspeeding among motorists. A study carried out by a professor and some students at the UAE University (UAEU) has shown that a simple smile may just be the solution to deter speedsters more effectively than traffic radars. Selecting Maqqam Street, a busy thee-lane road with a speed limit of 80kmph behind the UAEU campus, the group erected a large LED panel programmed to detect speed. “Usually, 30 per cent of drivers drive over the speed limit. After four days, the group’s theory was proven right. [Singapore] Positive Reinforcement. Many parents would refrain from showing their children graphic videos of traffic accidents.

But not IT engineer Jason Tay, 47, who has two children aged 14 and 11. He shows them news and videos of traffic accidents to remind them to be cautious. He is right to be concerned. Last year, there were 241 accidents involving children aged 12 and below. It was 199 in 2014 and 188 the previous year. Of the cases last year, seven were accidents at school zones, up from four in 2014 and two in 2013. The Traffic Police (TP) have taken a series of measures to address the trend. Reinforcement of Good Road Safety Behaviour. [Singapore] Positive and Negative Punishment. SINGAPORE — Irresponsible drivers face harsher penalties and will be kept off the roads for longer periods, if proposed amendments to the Road Traffic Act are passed. 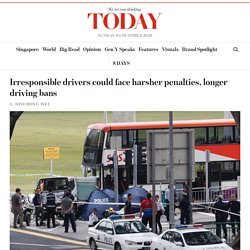 [Singapore] Positive Punishment. SINGAPORE - Motorists who drive dangerously can face harsher penalties from November following recent changes to the Road Traffic Act. Penalties under the changes that result in motorists' licences being suspended or revoked will take effect in the second half of next year, said the Ministry of Home Affairs (MHA) on Friday (Oct 25). Under the changes to the Road Traffic Act passed in Parliament in July, the duration of the sentences will depend on the extent of harm caused by errant motorists.

The harm caused is categorised such that death is the most severe, followed by grievous hurt, hurt and endangering life. For instance, repeat offenders who drive dangerously causing death will face a maximum of 15 years' in jail. This contrasts with the present penalty of up to five years' jail for repeat offenders. Any motorist who commits either offence under the influence of alcohol or drugs will be liable for additional penalties, which will run consecutively. [South Korea] Positive Punishment. [India] Positive Punishment. The minister of road transport and highways Nitin Gadkari has pointed out in the past that roughly 1.5 lakh people were killed in road accidents every year in India. 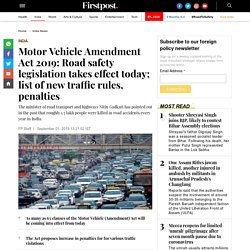 The Motor Vehicles Amendment Act, 2019, which contains 63 provisions that deal with penalties, licenses, registration and the National Transport Policy, will be implemented from Sunday, 1 September 2019. These are provisions which require no further amendments in the Central Motor Vehicles Rules 1989, reports said. The new law will enhance the penalty for unauthorised use of vehicles without licence to Rs 5,000 from Rs 1,000.

Besides, the penalty for driving without license will go up from Rs 500 to Rs 5,000. [England] Positive Punishment. Image copyright Getty Images Tougher punishments for the most serious speeding offences have come into force in England and Wales. 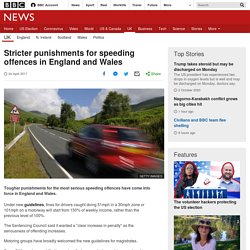 Under new guidelines, fines for drivers caught doing 51mph in a 30mph zone or 101mph on a motorway will start from 150% of weekly income, rather than the previous level of 100%. The Sentencing Council said it wanted a "clear increase in penalty" as the seriousness of offending increases. Motoring groups have broadly welcomed the new guidelines for magistrates. Punishment of Poor Road Safety Behaviour.