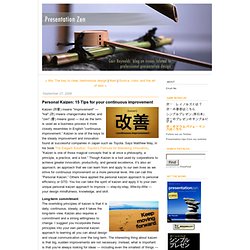 Kaizen is one of the keys to the steady improvement and innovation found at successful companies in Japan such as Toyota. Says Matthew May, in his book The Elegant Solution: Toyota’s Formula for Mastering Innovation, “Kaizen is one of those magical concepts that is at once a philosophy, a principle, a practice, and a tool.”

Healthy Mind Platter - for optimal brain matter. Your Body's Best Time for Everything. The Role of Identity in Making New Year's Resolutions. Regardless of what type of New Year’s resolutions you are making to change particular habits (e.g., working smarter rather than harder, being more thoughtful of others, exercising more), consider the importance of also imagining yourself in the future, i.e., either being productive or lazy, kinder or inconsiderate, and fit or out of shape. Why would thinking about who we want to be, and do not want to be, help us stick to our New Year’s Resolutions, particularly if we think about ourselves as lazy, inconsiderate, or out of shape?

Because when we contemplate possible selves, that is, who we hope to become in the future and who it is we fear becoming, we are more likely to engage in behaviors that help us become who we hope to be and avoid becoming who we fear. Consider the following study. Then the researchers asked the participants to report their exercise four weeks later, and eight weeks later. The benefits of imagining our future selves also apply to our careers. References Murru, E. The First Thing to Know When Creating a Habit. Books - 7 Habits of Highly Effective People - Habit 1: Be Proactive. 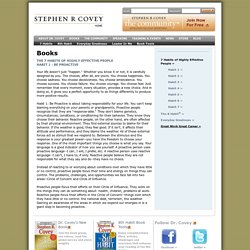 " Whether you know it or not, it is carefully designed by you. The choices, after all, are yours. You choose happiness. You choose sadness. You choose decisiveness. Longing for Change? How to Turn Nothing Into Something. I love Jim Rohn and recently came across a collection of CDs (his " Weekend Seminar ") that I bought and listened to while I was living in Mexico, around six years ago. 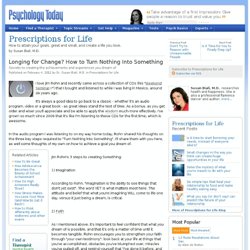 It's always a good idea to go back to a classic - whether it's an audio program, video or a great book - as great ideas stand the test of time. As a bonus, as you get older and wiser you'll appreciate and be able to apply the wisdom much more effectively. I've grown so much since 2006 that it's like I'm listening to these CDs for the first time, which is awesome. In the audio program I was listening to on my way home today, Rohn shared his thoughts on the three key steps required to "Turn Nothing into Something". I'll share them with you here, as well some thoughts of my own on how to achieve a goal you dream of. Cambio de hábitos. Tu puedes cambiar tus habitos y tus conductas. Los puntos 1 y 5 aluden a la motivación. 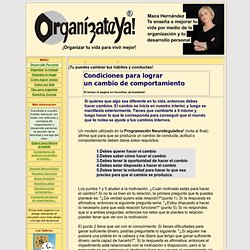 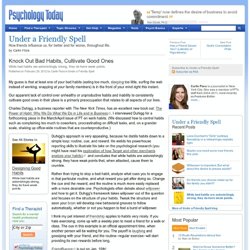 Our apparent lack of control over unhealthy or unproductive habits and inability to consistently cultivate good ones in their place is a primariy preoccupation that relates to all aspects of our lives. Charles Duhigg, a business reporter with , has an excellent new book out: The Power of Habit: Why We Do What We Do in Life and in Business . I interviewed Duhigg for a forthcoming piece in the March/April issue of PT on work habits.

(We discussed how to control habits such as complaining too much to coworkers, procrastinating on difficult tasks, and, on a grander scale, shaking up office-wide routines that are counterproductive.) Duhigg's approach is very appealing, because he distills habits down to a simple loop: routine, cue, and reward. Acaba con la “flojera”: 6 trucos científicamente probados para incrementar la fuerza de voluntad. 8 Ways to Kill Clutter in 5 Minutes. One of the biggest reasons for the pervasive clutter in my apartment is a lack of time to deal with it. 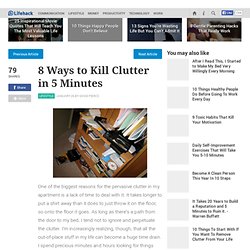 It takes longer to put a shirt away than it does to just throw it on the floor, so onto the floor it goes. As long as there’s a path from the door to my bed, I tend not to ignore and perpetuate the clutter. I’m increasingly realizing, though, that all the out-of-place stuff in my life can become a huge time drain. A Simple Trick for Sticking to Your Resolutions - For Good. There's a trick to keeping your resolutions. It's amazingly simple, yet so effective. THE GOLD MEDAL MIND. The day before Jonathan Jordan was to compete in the 1996 NCAA Track and Field Indoor Championships in Bakersfield, he got food poisoning and had to be rushed to the hospital. 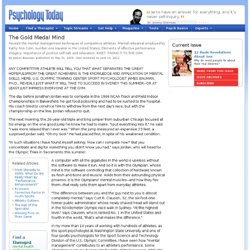 His coach tried to convince him to withdraw from the next day's race, but with the championship on the line, Jordan refused to quit. The next morning, the 26-year-old triple and long jumper from suburban Chicago focused all his energy on the one good jump he knew he had to make. Ten Ways to Organize Your Time, Talents and Energy. I am always intrigued by humanity’s belief that at midnight on December 31 st a new year will begin and life will be different. Not only will it be different a myriad number of changes are going to be made simultaneously.

Have you been unable to stop smoking , lose weight, give up coffee or start exercising? No problem: now you can achieve success across the board. Start Slowly But Start Now. Some people can’t decide to change a habit because they put too big and too far goal ahead of them. 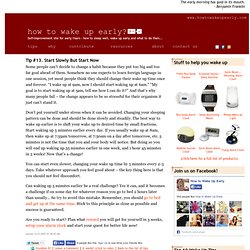 Somehow no one expects to learn foreign language in one session, yet most people think they should change their wake up time once and forever. “I wake up at 9am, now I should start waking up at 6am.” “My goal is to start waking up at 5am, tell me how I can do it?” And that’s why many people fail – the change appears to be so stressful for their organism it just can’t stand it. Don’t put yourself under stress when it can be avoided. You can start even slower, changing your wake up time by 5 minutes every 2-3 days. Back to School: 10 steps to help you wake up early for school. It Takes 3 Weeks To Make A Habit. Yes, buiding a habit takes some time, but 3 weeks will be definitely enough for building basic early wake up habit. 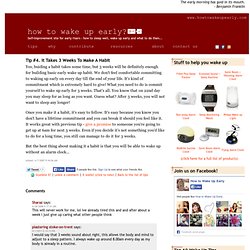 We don't feel comfortable committing to waking up early on every day till the end of your life. Your Inner Voice: A Key To Self-Control? Most of us have experienced it before. That little voice in our heads that tells us not to take that last slice of pizza, to "keep going" for that few extra minutes on the treadmill, or not to make that snippy comment to our co-worker that we desperately want to blurt out. Intuitively, we have a sense that we can tell ourselves what to do or talk ourselves out of something. But, does our inner voice really aid self-control and help us resist temptation? New research suggests the answer is "yes. " Do Not Suppress Addictive Thoughts! Recently, a man suffering with alcoholism told me how he approached his problem: when he had thoughts of drinking, he tried to push them out of his mind. 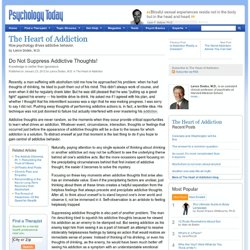 This didn't always work of course, and even when it did he regularly drank later. Keep It Simple, Stupid. Modern business is in love with the complex and advanced (and the public service even more so). The ‘strategic' is better than the ‘operational'. Frontline managers want to do courses aimed at company directors, rather than basic management courses. Incomprehensibility is taken as a sign of genius. How to Salvage Any Blown New Year Resolutions.

Related:  Habit   -  Charles Duhigg - The Power of Habit   -  Monitor Habit Formation Progress Daily   -  How Long Does It Take to Change a Habit?   -  iPhone & iPad Apps that Support Habit Change   -  Joe's Goals - Free Online Habit Tracker   -  What It Takes to Form a Good Habit   -  21habit: Invest in Yourself   -  Chains.cc - Don't Break The Chain App   -  Hacking Habits: How To Make New Behaviors Last For Good   -  The Secret to Changing Habits Successfully   -  How your brain likes to be treated at revision time | Education | The Guardian   -  The Psychology of Getting Unstuck: How to Overcome the “OK Plateau” of Performance & Personal Growth | Brain Pickings   -  12 Indispensable Mindful Living Tools : zen habits   -  The Secret to Breaking Out of Our Most Destructive Habits | Alternet   -  The Psychology of Self-Control | Brain Pickings   -  How Long It Takes to Form a New Habit | Brain Pickings   -  The science of willpower: Kelly McGonigal on sticking to resolutions | TED Blog   -  7 Apps to Help You Achieve Your Goals and Build New Habits   -  Prepare Your Brain for Change - Video - Harvard Business Review   -  Train Your Brain To Let Go Of Habits – 10 Methods For Creating New Neural Pathways   -  Shawn Achor: The happy secret to better work   -  Daniel Goldstein: The battle between your present and future self   -  Mindfulness Exercises: 8 That Fit into Your Day   -  Dan Gilbert: The psychology of your future self   -  The Psychology of Your Future Self and How Your Present Illusions Hinder Your Future Happiness | Brain Pickings   -  Fixed vs. Growth: The Two Basic Mindsets That Shape Our Lives   -  How to Debug Your Brain and Build Better Habits   -  The Backfire Effect: The Psychology of Why We Have a Hard Time Changing Our Minds | Brain Pickings   -  Education   -  Enterprise