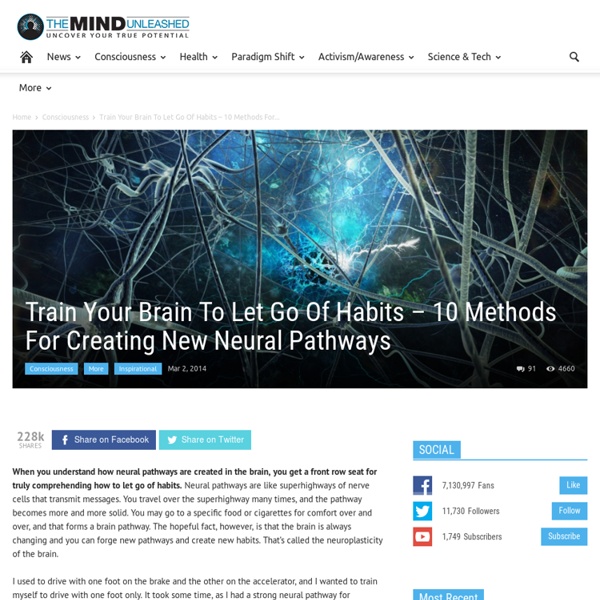 When you understand how neural pathways are created in the brain, you get a front row seat for truly comprehending how to let go of habits. Neural pathways are like superhighways of nerve cells that transmit messages. You travel over the superhighway many times, and the pathway becomes more and more solid. I used to drive with one foot on the brake and the other on the accelerator, and I wanted to train myself to drive with one foot only. Because of neuroplasticity, the brain’s ever-changing potentials, anything is possible. Whether you work with others on their habits or you work with your own (or both), you can apply these understandings to boost your success. Some Powerful Ways to Retrain the Brain 1. You may remember the punch line “The light bulb has to want to change.” 2. Look at feelings, thoughts, and how the body is responding to the habit, and see what results you’re creating in your life. 3. This is very important. 4. 5. 6. This isn’t everyone’s cup of tea. 7. 8. 9. 10. Related:  Miscellaneous stuff 3

The Miracle of 528 Hz Solfeggio & Fibonacci Numbers Solfeggio tones create music to calm an overactive mind and send us towards connecting with the divine. According to Dr. Leonard Horowitz, 528 Hertz is a frequency that is central to the “musical mathematical matrix of creation.” More than any sound previously discovered, the “LOVE frequency” resonates at the heart of everything. It connects your heart, your spiritual essence, to the spiraling reality of heaven and earth. The Love frequency is the “Miracle” note of the original Solfeggio musical scale. Math scientist Victor Showell describes 528 as fundamental to the ancient Pi, Phi, and the Golden Mean evident throughout natural design. 528 resolves to a 6, the icon for physical manifestation. 528 is known as the ‘Miracle’ tone which brings remarkable and extraordinary changes. 1. an extraordinary occurrence that surpasses all known human powers or natural forces and is ascribed to a divine or supernatural cause, esp. to God. The 528Hz tone alone is associated with ‘DNA Repair‘ Sources:

Why Time Slows Down When We’re Afraid, Speeds Up as We Age, and Gets Warped on Vacation by Maria Popova “Time perception matters because it is the experience of time that roots us in our mental reality.” Given my soft spot for famous diaries, it should come as no surprise that I keep one myself. That’s precisely what acclaimed BBC broadcaster and psychology writer Claudia Hammond explores in Time Warped: Unlocking the Mysteries of Time Perception (public library) — a fascinating foray into the idea that our experience of time is actively created by our own minds and how these sensations of what neuroscientists and psychologists call “mind time” are created. We construct the experience of time in our minds, so it follows that we are able to change the elements we find troubling — whether it’s trying to stop the years racing past, or speeding up time when we’re stuck in a queue, trying to live more in the present, or working out how long ago we last saw our old friends. And yet the brain does keep track of time, even if inaccurately. Donating = Loving Share on Tumblr

Happy Birthday, Brain Pickings: 7 Things I Learned in 7 Years of Reading, Writing, and Living by Maria Popova Reflections on how to keep the center solid as you continue to evolve. UPDATE: The fine folks of Holstee have turned these seven learnings into a gorgeous letterpress poster inspired by mid-century children’s book illustration. On October 23, 2006, I sent a short email to a few friends at work — one of the four jobs I held while paying my way through college — with the subject line “brain pickings,” announcing my intention to start a weekly digest featuring five stimulating things to learn about each week, from a breakthrough in neuroscience to a timeless piece of poetry. “It should take no more than 4 minutes (hopefully much less) to read,” I promised. This was the inception of Brain Pickings. Illustration by Maurice Sendak from 'I'll Be You and You Be Me' by Ruth Krauss, 1954. Illustration from 'Inside the Rainbow: Russian Children's Literature 1920-35.' Allow yourself the uncomfortable luxury of changing your mind. Donating = Loving Share on Tumblr

3 2 1 g o l d ... Welcome! Simulations back up theory that Universe is a hologram At a black hole, Albert Einstein’s theory of gravity apparently clashes with quantum physics, but that conflict could be solved if the Universe were a holographic projection. A team of physicists has provided some of the clearest evidence yet that our Universe could be just one big projection. In 1997, theoretical physicist Juan Maldacena proposed that an audacious model of the Universe in which gravity arises from infinitesimally thin, vibrating strings could be reinterpreted in terms of well-established physics. The mathematically intricate world of strings, which exist in nine dimensions of space plus one of time, would be merely a hologram: the real action would play out in a simpler, flatter cosmos where there is no gravity. Maldacena’s idea thrilled physicists because it offered a way to put the popular but still unproven theory of strings on solid footing — and because it solved apparent inconsistencies between quantum physics and Einstein’s theory of gravity. Regime change

Can't Stand Meditation? This Technique is For You. A consistent meditation practice is a struggle for even the most experienced of meditators. For some reason it’s difficult to bring yourself to sit down and quiet the mind despite knowing that it’s the best thing for you. I was talking about this phenomenon with my good friend Phil Drolet of The Feel Good Lifestyle and he replied with a novel solution. “When you go to the gym, do you just do bench press the entire time?” I said “No, I do 5-7 different exercises depending on what muscles I’m working on.” “Exactly! The Method Instead of doing 20 solid minutes of meditation, Phil breaks it down into 5 4-minute intervals of different practices. 1-4 min — Breathing Focus 5-8 min — Your Favorite Mantra 9-12 min — Loving/Kindness 13-16 min — Gratitude 17-20 min — Intention Visualization This not only makes your session go by quickly, but also allows you to energize many different parts of your psyche and energy body. Is this a cop out? Yes and no. The Takeaway

Earth's Grid System, Becker-Hagens, Ley Lines, Hartmann Net, Curry Lines - Science and Pseudoscience Earth's Grid Systems Science and Pseudoscience Topography, is the study of Earth's surface shape and features or those of planets, moons, and asteroids. It is also the description of such surface shapes and features (especially their depiction in maps). The topography of an area can also mean the surface shape and features themselves. Planetary Energetic Grid Theory Planetary Energetic Grid Theory falls under the heading of pseudoscience. Plato recognized grids and their patterns, devising a theory that the Earth's basic structure evolved from a simple geometric shapes to more complex ones. Becker-Hagens Grid Bill Becker and Bethe Hagens discussed the code of the Platonic Solids' positions on Earth, ascribing this discovery to the work of Ivan P. Becker and Hagens' attention was drawn to this research through the work of Chris Bird, who punished "Planetary Grid" in the New Age Journal in May 1975. South America's grid triangle forms the continent around itself. We see Dr. According to Dr.

8 tips to make your life more surprising — from a “Surprisologist” A closeup of Tania Luna, with glow stick. Photo: James Duncan Davidson In today’s talk, Tania Luna shares her experience of immigrating to the United States from Ukraine as a little girl. Commit to the mindset and process of surprise. Luna believes we can all be surprisologists. Tania Luna leads a TED audience in a glowstick dance, during a talk given a year prior to the one posted today. Awana commands of Christ 10 Scientific Studies That Prove Consciousness Can Alter Our Physical Material World Nikola Tesla said it best, “the day science begins to study non-physical phenomena, it will make more progress in one decade than in all the previous centuries of its existence. To understand the true nature of the universe, one must think it terms of energy, frequency and vibration.” Swami Vivekananda influenced Tesla’s work, an Indian Hindu monk and chief disciple of the 19th century saint Ramakrishna. Tesla was also influenced by other Vedic philosophies. Science works best when in harmony with nature. Intention of This Article. I want to make it clear that my intention of presenting this information is to demonstrate that thoughts, intentions, prayer and other units of consciousness can directly influence our physical material world. The Science For quite some time now, physicists have been exploring the relationship between human consciousness and its relationship to the structure of matter. “Everything we call real is made of things that cannot be regarded as real” – Niels Bohr 1.