The Secret to Breaking Out of Our Most Destructive Habits 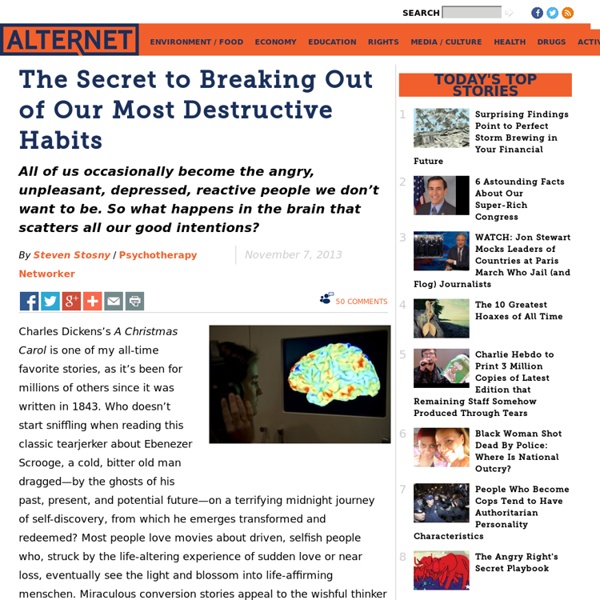 This file illustration photo shows a functional magnetic resonance image (fMRI). US researchers have published incredibly detailed images of the human brain as part of an international project aimed at uncovering how brain architecture influences personal Charles Dickens’s A Christmas Carol is one of my all-time favorite stories, as it’s been for millions of others since it was written in 1843. Who doesn’t start sniffling when reading this classic tearjerker about Ebenezer Scrooge, a cold, bitter old man dragged—by the ghosts of his past, present, and potential future—on a terrifying midnight journey of self-discovery, from which he emerges transformed and redeemed? Most people love movies about driven, selfish people who, struck by the life-altering experience of sudden love or near loss, eventually see the light and blossom into life-affirming menschen. Miraculous conversion stories appeal to the wishful thinker in all of us. Habits Rule Patrick, Round II 1. 2. 3. 1. 2. 3. Related:  For All of Us

Required watching for any TED speaker: The science of stage fright One thing can strike fear into the heart of the fiercest warrior, the most powerful CEO and the smartest person in any given room: having to speak in public. The thought of it makes the palms sweat, the heart beat faster and the limbs start to shake. An estimated 75% of people have a fear of speaking in public, and it’s something that nearly everyone who takes the TED stage must work hard to overcome. This TED-Ed lesson, the science of stage fright, just might help. “Humans are wired to worry about reputation. The lesson explains exactly what happens in the body before speaking in public and, of course, gives suggestions on how to calm stage fright. Over on the TED-Ed blog, animator Zambrano shares what shaped the imagery for this very cool lesson. “After reading the first lines of Mikael Cho’s script, quite a few images popped in my head.

Dig Deep: You’re Stronger Than You Think Awhile back I was doing a HIIT (High Intensity Interval Training) workout over on a nearby running/biking trail. Along the trail there’s a fairly steep hill that takes about a minute to sprint up at full speed. For my workout, I would charge up the hill as fast as I could, walk/jog back down, and repeat the sequence ten times. It puts you in a nice amount of pain. Halfway through the last sprint in my set, my legs and lungs were crying for mercy. A seemingly insignificant moment in my life, but it actually spurred a great deal of reflection. As it turns out, a great deal. You’re Physically Stronger Than You Think Athletes have always known there is a connection between one’s mind and one’s performance – that you can will yourself to keep going when the body grows fatigued. This fact was fascinatingly demonstrated in a study conducted by scientists from the University of Kent in England and the French Institute of Health and Medical Research. What’s going on in these studies?

Pineal Gland's Third Eye: The Biggest Cover-up in Human History The pineal gland (also called the pineal body, epiphysis cerebri, epiphysis or the “third eye”) is a small endocrine gland in the vertebrate brain. It produces the serotonin derivative melatonin, a hormone that affects the modulation of wake/sleep patterns and seasonal functions. Its shape resembles a tiny pine cone (hence its name), and it is located near the center of the brain, between the two hemispheres, tucked in a groove where the two rounded thalamic bodies join. The Secret : What they don’t want you to KNOW! Every human being’s Pineal Gland or the Third Eye can be activated to spiritual world frequencies and enables you to have the sense of all knowing, godlike euphoria and oneness all around you. The link in the video can be found HERE or HERE With more advance practice and ancient methods it is also possible to control the thoughts and actions of people in the physical world. Pineal Gland is represented in Catholicism in Rome; they depict the pineal as a pine cone in art.

The Psychology of Self-Control by Maria Popova “Everyone’s self-control is a limited resource; it’s like muscle strength: the more we use it, the less remains in the tank, until we replenish it with rest.” Ever since psychology godfather William James first expounded the crucial role of habit in how we live and who we become, modern psychology has sought to figure out how we can rewire our bad habits, maximize our willpower, and use habits to optimize our productivity. And yet, if the market for self-help books and to-do apps and productivity tools is any indication, a great many of us still struggle with either understanding the psychology of habit and willpower or applying it to what really matters. People naturally vary in the amount of self-control they have, so some will find it more difficult than others to break a habit. Fortunately, Dean points out that there are a number of strategies we can use to counter our depleted willpower. Donating = Loving Brain Pickings has a free weekly newsletter. Share on Tumblr

Could “braingasms” supplant meditation? “Before we start, make sure you are well-positioned in your reclining chair or bed so no one gets hurt falling off their desk or anything,” Lilium purrs into the camera. She’s a Danish girl in her mid-20s with dyed platinum-blonde hair, intense green eyes, and the craniofacial structure of a baby bird. “I can help you let go and become totally present in this time and state,” she says softly, her gaze never wavering from the camera’s lens as she speaks to the 50-odd attendees in her chatroom. “The only thing you have to do is keep listening to my voice.” During her free half-hour live hypnosis session—which consists of deep breathing and visualization exercises, followed by five minutes of Lilium speaking softly in Danish—I can’t say I approach that level of bliss. “Lilium, you have truly been a blessing to me. Another, having clearly disregarded the presession disclaimer, is more succinct: “I think my head is [bleeding] from the fall with my chair.”

Scientists discover secret code hidden within human DNA Published time: December 14, 2013 01:35 Edited time: December 16, 2013 07:39 This undated handout illustration shows the DNA double helix (AFP Photo) Scientists have discovered a secret second code hiding within DNA which instructs cells on how genes are controlled. The amazing discovery is expected to open new doors to the diagnosis and treatment of diseases, according to a new study. Ever since the genetic code was deciphered over 40 years ago, scientists have believed that it only described how proteins are made. “For over 40 years we have assumed that DNA changes affecting the genetic code solely impact how proteins are made,” said Stamatoyannopoulos, according to the press release. Scientists discovered that the second language instructs the cells on how genes are controlled, according to findings published in Science magazine on Friday. DNA (Deoxyribonucleic acid) is a nucleic acid that is the main constituent of the chromosomes of all organisms, except some viruses.

William James on Habit by Maria Popova “We are spinning our own fates, good or evil, and never to be undone. Every smallest stroke of virtue or of vice leaves its never so little scar.” “We are what we repeatedly do,” Aristotle famously proclaimed. I found this interesting not merely out of solipsism, as it somehow validated my having had the same breakfast day in and day out for nearly a decade (steel-cut oats, fat-free Greek yogurt, whey protein powder, seasonal fruit), but also because it isn’t a novel idea at all. When we look at living creatures from an outward point of view, one of the first things that strike us is that they are bundles of habits. James begins with a strictly scientific, physiological account of the brain and our coteries of ingrained information patterns, exploring the notion of neuroplasticity a century before it became a buzzword of modern popular neuroscience and offering this elegant definition: Habit is thus the enormous fly-wheel of society, its most precious conservative agent.

Get Fit Like a Wild Man: A Primer on MovNat and Outdoor Training Editor’s Note: This is a guest post from MovNat founder Erwan Le Corre. “A pattern that had been familiar throughout history is that after a war is fought and won, the tendency is for society to relax, enjoy life, and exercise less. … It appears that as societies become too enamored with wealth, prosperity and self-entertainment, fitness levels drop. In addition, as technology has advanced with man, the levels of physical fitness have decreased.” –Lance C. Dalleck and Len Kravitz In the late 19th century, Dudley Allen Sargent – virtually the founder of physical education in America – warned that without solid physical education programs, people would become fat, deformed, and clumsy. Fitness has become accessory to the life of the modern man. But looking fit and being fit are not necessarily the same. Enter MovNat. The History of Physical Training If you think that fitness started with aerobics and body-building, Jane Fonda and Arnold Schwarzenegger, think again. Cultivate Adaptability

The Way of the Spiritual Warrior: Live Intentionally. ~ Paige Vignola Via Paige Vignolaon Nov 19, 2013 {The Hidari Mitsu Tomoe is said to represent man, heavens and earth in harmonious rotation.} The way we do anything is the way we do everything. This is a fundamental tenant of the Budokon practice, serving as a reminder that as practitioners we should live intentionally. With each moment of every day we, as human beings living and existing in this world, are faced with choices and decisions that we must make; some loom significant and some may seem small and meaningless but the progression and outcome of our lives are directed by each of these choices, no matter how small they appear in the moment. Far too often we live our lives, moving through our moments, on autopilot. How often do we ask ourselves, “How did I get here?” Sometimes this question is directed at a literal physical location; we blindly move from place to place, thinking of being elsewhere, thinking of past conversations, thinking of future events, not being present in the moment.

Fixed vs. Growth: The Two Basic Mindsets That Shape Our Lives By Maria Popova “If you imagine less, less will be what you undoubtedly deserve,” Debbie Millman counseled in one of the best commencement speeches ever given, urging: “Do what you love, and don’t stop until you get what you love. Work as hard as you can, imagine immensities…” Far from Pollyanna platitude, this advice actually reflects what modern psychology knows about how belief systems about our own abilities and potential fuel our behavior and predict our success. Much of that understanding stems from the work of Stanford psychologist Carol Dweck, synthesized in her remarkably insightful Mindset: The New Psychology of Success (public library) — an inquiry into the power of our beliefs, both conscious and unconscious, and how changing even the simplest of them can have profound impact on nearly every aspect of our lives. One of the most basic beliefs we carry about ourselves, Dweck found in her research, has to do with how we view and inhabit what we consider to be our personality.

Related:
Related:  For All of Us