Fixed vs. Growth: The Two Basic Mindsets That Shape Our Lives 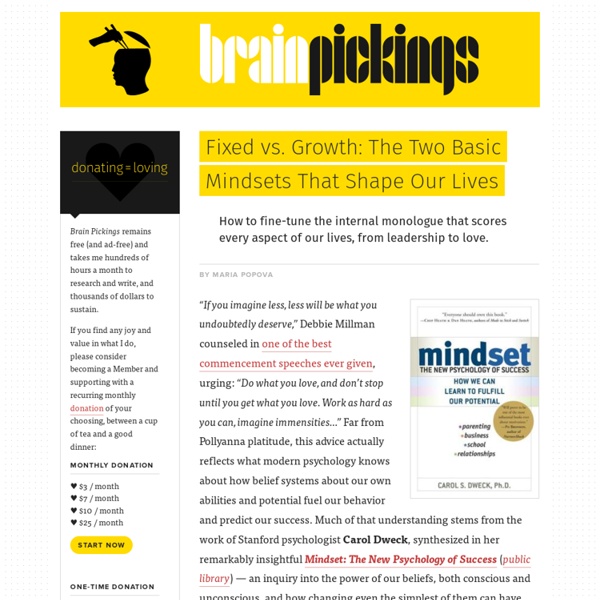 By Maria Popova “If you imagine less, less will be what you undoubtedly deserve,” Debbie Millman counseled in one of the best commencement speeches ever given, urging: “Do what you love, and don’t stop until you get what you love. Work as hard as you can, imagine immensities…” Far from Pollyanna platitude, this advice actually reflects what modern psychology knows about how belief systems about our own abilities and potential fuel our behavior and predict our success. Much of that understanding stems from the work of Stanford psychologist Carol Dweck, synthesized in her remarkably insightful Mindset: The New Psychology of Success (public library) — an inquiry into the power of our beliefs, both conscious and unconscious, and how changing even the simplest of them can have profound impact on nearly every aspect of our lives. One of the most basic beliefs we carry about ourselves, Dweck found in her research, has to do with how we view and inhabit what we consider to be our personality.

(VIDEO) The Observable Universe: A moment of Awe  The age of the universe is about 13.75 billion years. The diameter of the observable universe is estimated at about 28 billion parsecs (93 billion light-years). As a reminder, a light-year is a unit of length equal to just under 10 trillion kilometers (or about 6 trillion miles). The Observable Universe consists of the galaxies and other matter that we can, in principle, observe from Earth in the present day—because light (or other signals) from those objects has had time to reach the Earth since the beginning of the cosmological expansion. Isaac Asimov on Curiosity, Taking Risk, and the Value of Space Exploration in Muppet Magazine by Maria Popova “To make discoveries, you have to be curious about why the universe is the way it is.” In the summer of 1983, Muppet Magazine invited science fiction icon Isaac Asimov — sage of science, champion of creativity in education, visionary of the future, lover of libraries — to “a meeting of the minds,” wherein Dr. Julius Strangepork would interview Asimov. Despite the silly tone of German-inspired Strangepork-speak, the wide-ranging conversation touches on a number of timeless and surprisingly timely issues. Three decades before the precarious state of space exploration we face today, as NASA is implementing new “cost-saving measures” at the expense of education and public outreach, Asimov speaks to the enormous cultural benefits of space exploration:

A Summary of Korean Terminology for TaeKwonDo Introduction This document is an attempt to compile a list of Korean terminology used in the study of TaeKwonDo. In years past, the terminology reflected heavy Chinese influence. Around 1975 however, most styles "upgraded" to use a more "modern" Korean terminology that attempts to shed these other influences in an effort to be more "pure" Korean. Do’s and Don’ts of Self-Compassion Compassion, which literally means, "to suffer with," is sympathy for the hurt or hardship of others, with a motivation to help. Self-compassion is sympathy for one’s own hardship or suffering, with a motivation to heal, improve, repair. Both self-compassion and compassion for others require sensitivity to the suffering that lurks beneath the symptoms and defenses that often mask it. The most common masks of suffering are resentment, anger, addictions, and compulsions. People low in self-compassion tend to get irritated or defensive at the mere mention of compassion for others and are often offended when others show compassion to them. When they think they are being compassionate, they come off as manipulative (trying to get something in return) or morally superior, both of which elicit negative response.

Creativity is rejected: Teachers and bosses don’t value out-of-the-box thinking. Illustration by Rob Donnelly In the United States we are raised to appreciate the accomplishments of inventors and thinkers—creative people whose ideas have transformed our world. We celebrate the famously imaginative, the greatest artists and innovators from Van Gogh to Steve Jobs. Viewing the world creatively is supposed to be an asset, even a virtue. Online job boards burst with ads recruiting “idea people” and “out of the box” thinkers.

Young Leo Appreciation Anonymous Whats your favorite movie Leo is in? Permalink xalfdx thank you for existing wooh i've been looking everywhere for this thank you thank you divinitudes THANK YOU FOR CREATING THIS BLOG I LOVE YOU Anonymous Have u watched 'the basketball diaries''?? I Don't Love You Anymore - JustMyTypeMag A year ago today, the hardest words I think a woman will ever hear were said to me. “I don’t love you anymore.” “I no longer want to spend the rest of my life… with you.” I can still remember the blur, the feeling, the crushing physical pain that shocked through my heart… the numbness. The Galactic Center It's true, Pluto now aligns with the Galactic Center and will through all of 2007 and 2008. Following is an excerpt from The Soul of the Sky, one of the many components of my Galactic Trilogy CD. This article is copyrighted and may be used for classes and handouts, but it may NOT be posted on other websites. To purchase the continuously updated Galactic Trilogy CD, simply click here. The Galactic Center (Z) Longitude (tropical): 26 Sagittarius 51 14 (all positions epoch 2000.0) Latitude: 05 S 36 Longitude Sidereal: 02 Sagittarius 07 03 Right Ascension 265 39 17 Declination: 29 S 00

The Backfire Effect: The Psychology of Why We Have a Hard Time Changing Our Minds by Maria Popova How the disconnect between information and insight explains our dangerous self-righteousness. “Allow yourself the uncomfortable luxury of changing your mind,” I wrote in reflecting on the 7 most important things I learned in 7 years of Brain Pickings. It’s a conundrum most of us grapple with — on the one hand, the awareness that personal growth means transcending our smaller selves as we reach for a more dimensional, intelligent, and enlightened understanding of the world, and on the other hand, the excruciating growing pains of evolving or completely abandoning our former, more inferior beliefs as we integrate new knowledge and insight into our comprehension of how life works.

Creativity, the Gift of Failure, and the Crucial Difference Between Success and Mastery by Maria Popova The lost art of learning to stand “where we would rather not and expand in ways we never knew we could.” “You gotta be willing to fail… if you’re afraid of failing, you won’t get very far,” Steve Jobs cautioned. “There is no such thing as failure — failure is just life trying to move us in another direction,” Oprah counseled new Harvard graduates. In his wonderfully heartening letter of fatherly advice, F. Scott Fitzgerald gave his young daughter Scottie a list of things to worry and not worry about in life; among the unworriables, he listed failure, “unless it comes through your own fault.” List of iPod models [[File:iphone-comparison.png|thumb|right|Size comparison, from top to bottom, between: - a first generation iPod Nano - a first generation iPhone - a fourth generation iPod Classic / The Apple iPod line has been upgraded many times, and each significant revision is called a "generation". Only the most recent generation and refurbished units of previous generations of the iPod line are available from Apple for each model (classic, nano, shuffle, touch). Each new generation usually has more features and refinements while typically being physically smaller and lighter than its predecessor, while usually (but not always) retaining the older model's price tag. Notable changes include the touch-sensitive click wheel replacing the mechanical scroll wheel, use of color displays, and flash memory replacing hard disks.

How to Pick Yourself Up After a Breakup - JustMyTypeMag A few years ago, I went through one of the most trying experiences of my life. I went through a breakup that devastated me to my core, and left me feeling broken and shattered. It was as if my entire reality and beautiful, magical world I tried so hard to create came crashing down. Since I had never experienced such a crippling pain, I was very afraid that the depression and negative thoughts would not end.