Maximize Google Drive on the iPad and iOS. What's New in iOS 9? Want to know what features your iPhone will be getting with the release of iOS 9 in September? 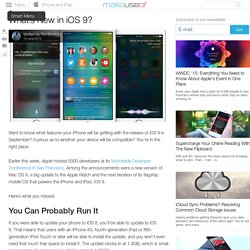 Curious as to whether your device will be compatible? You’re in the right place. Earlier this week, Apple hosted 5000 developers at its Worldwide Developer Conference in San Francisco. Among the announcements were a new version of Mac OS X, a big update to the Apple Watch and the next iteration of its flagship mobile OS that powers the iPhone and iPad, iOS 9. Here’s what you missed. You Can Probably Run It If you were able to update your phone to iOS 8, you’ll be able to update to iOS 9. One thing worth mentioning is that iOS 9 gives app developers the choice of simply switching off support for older 32-bit devices that don’t use Apple’s A7 chip or newer. 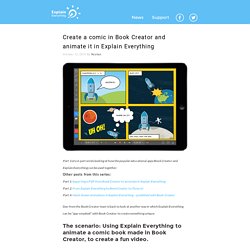 The scenario: Using Explain Everything to animate a comic book made in Book Creator, to create a fun video. Book Creator 4.0 has just been released onto the App Store. With this update there are now comic book templates and styles added to the app, to make really simple and fun comic books. We’re going to go through creating the comic book, exporting it as a PDF to Explain Everything, recording an animation using the pan and zoom tool, and exporting the end result as a video. 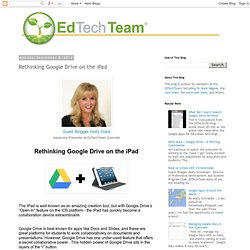 Google Drive is best known for apps like Docs and Slides, and these are great platforms for students to work collaboratively on documents and presentations. However, Google Drive has one under-used feature that offers a secret collaborative power . This hidden power of Google Drive sits in the layers of the “i” button. Inside the layers of the “i” button lives the “Open-In“ feature - and this is where the collaborative magic happens. Two Amazing Collaboration Scenarios using the Open-In Feature: iMovie: Here is how students can collaboratively create an iMovie - using the Open-In feature. First, students work together to plan a movie project. That was 2012 - it’s 2014 and the power of Google on an iPad has changed! Control Alt Achieve: Googlink: Using Google Drawings like a Thinglink. Google Drawings is often overshadowed by the other Google Drive tools such as Docs, Sheets, Slides, and Forms. 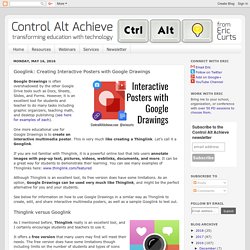 However, it is an excellent tool for students and teacher to do many tasks including graphic organizers, teaching math, and desktop publishing (see here for examples of each). One more educational use for Google Drawings is to create an interactive multimedia poster. This is very much like creating a Thinglink. Let’s call it a Googlink. If you are not familiar with Thinglink, it is a powerful online tool that lets users annotate images with pop-up text, pictures, videos, weblinks, documents, and more.

Although Thinglink is an excellent tool, its free version does have some limitations. See below for information on how to use Google Drawings in a similar way as Thinglink to create, edit, and share interactive multimedia posters, as well as a sample Googlink to test out.Thinglink versus Googlink It offers a free version that many users may find will meet their needs. Conclusion.