Job loss inequality and how to address it. Charting Covid-19 in NZ. Farah Hancock Farah Hancock is a Newsroom reporter who covers environment, biodiversity and science. 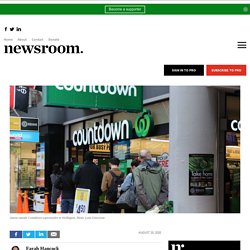 Show more. The Bulletin: Many stories told by latest unemployment figures. Good morning and welcome to The Bulletin. 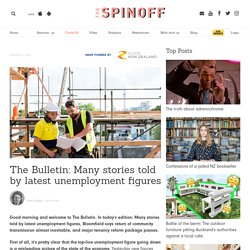 In today’s edition: Many stories told by latest unemployment figures, Bloomfield says return of community transmission almost inevitable, and major tenancy reform package passes. First of all, it’s pretty clear that the top-line unemployment figure going down is a misleading picture of the state of the economy. Yesterday new figures from Stats NZ suggested unemployment was now down to 4%, which defied predictions, but of course it isn’t the full story. The Spinoff’s Michael Andrew has gone through the numbers, and found a big rise in the number of people who are ‘underemployed’ – that is, working less than they’d like to be. There has also been a fall in the number of hours worked, which suggests that many employers have responded to Covid-19 with tightening, rather than extreme mass layoffs. Why the hell has New Zealand’s unemployment rate just gone down? New Zealand’s unemployment rate has just fallen, defying experts and flying in the face of everything we expected. 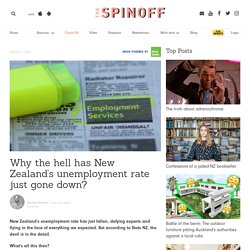 But according to Stats NZ, the devil is in the detail. What’s all this then? In a bizarre turn of events, New Zealand’s seasonally adjusted unemployment rate has actually fallen from 4.2% to 4% for the June quarter, according to the Household Labour Force Survey released by Stats NZ today. The survey, which polls 15,000 to 16,000 households, provided the first official employment statistics from across April, May and June – the months including and immediately following New Zealand’s level four lockdown. Beyond the 4 percent job figure. AUGUST 6, 2020 Updated 4 hours ago. 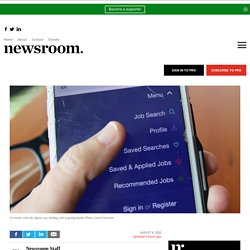 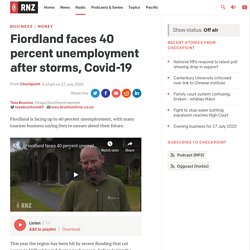 This year the region has been hit by severe flooding that cut access to Milford Sound during peak season, before losing the Chinese tourist market, then all visitors due to Covid-19. Traditionally about three-quarters of Fiordland's visitors are from overseas. NZ economy predicted to emerge from Covid-19 better than most. The Covid-19 pandemic is expected to leave a lasting scar on the world's economies but New Zealand is likely to fare better than most, according to a credit ratings agency. 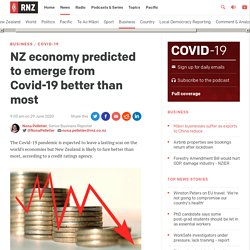 New Zealand's economy was expected to shrink 5 percent this year, but bounce back with 6 percent growth in 2021, an S&P Global review said. Photo: 123RF A review by S&P Global said the recession would be uneven across the Asia Pacific region and New Zealand would be among the countries to escape with less permanent damage, the agency said. New Zealand was in a small group of countries with well-targeted economic stimulus and management of the pandemic, including China, Korea, Taiwan, Australia, Japan and Singapore. The long-term cost to New Zealand's real GDP would be an estimated 2.7 percent, on par with Japan and Australia, and far lower than the cost of the Global Financial Crisis. "This is not business as usual, and one drag on the New Zealand economy will continue to be international travel and tourism. 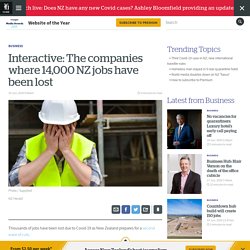 A new Herald interactive shows which companies made major cuts - but there are many more. Figures released by Statistics New Zealand this week showed the number of jobs fell by a record 37,000 or 1.7 per cent in April alone, the biggest monthly fall in percentage terms in 20 years, when the measurement was established.

Covid-19 job losses Millennium/Copthorne hotels. Deep Trouble, part three: Unemployment and racial privilege. Māori make up 29 per cent of Jobseeker recipients since March, down from 48 per cent in February. 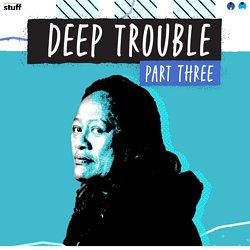 European New Zealanders, on the other hand, make up 43 per cent of recipients in these more generous times, up from 30 per cent in February. It’s the most significant rise for the European demographic in years: 14,290 people of European ethnicity went on to Jobseeker in March and April, compared with 9798 Māori.

In short: When more European people have been in need of help, the benefit almost doubled and became much easier to get. When it was mostly Māori who needed help prior to Covid-19, there was much less money available and it was an ordeal to obtain. “I don’t begrudge the ones that got laid off,” says Paraha. The Side Eye: The tunnel, the lights. The Side Eye is a monthly non-fiction comic by Toby Morris, supported by NZ On Air. 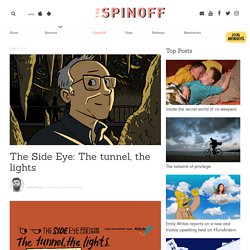 Budget 2020: Unemployment seen peaking at 9.8% in September. The New Zealand economy faces a relatively short and very sharp recession over the coming year, with unemployment peaking at 9.8 per cent, before massive government spending kicks into to help stoke growth. 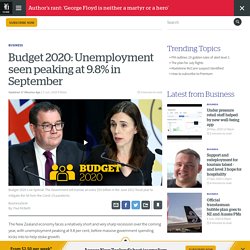 The Treasury predicts gross domestic product shrank by almost quarter in the three months ending June 30 as the national lockdown and subsequent restrictions halted activity. READ MORE:• Budget 2020: Live - What's in store and what we know so far• Budget 2020: Government unveils $50 billion Covid response, wage subsidy scheme extended• Budget 2020: Budget at a glance - the big Covid 19 package and how hard has it hit• Budget 2020: Government's Covid 19 wage subsidy scheme extended by 8 weeks, now up to $14b The Treasury's forecasts remain uncertain and risks are skewed to the downside.

The initial base case assumed a smaller government Covid-19 response and recovery fund, which would have seen two years of economic contraction. Jobs saved. 19 coronavirus: Impact on NZ economy 'may not be as severe' as predicted. Signs are emerging that the economic hit from Covid-19 might not be as bad as expected, although what actually happens from slamming the brakes on activity both at home and abroad remains uncertain. "From the outset of this pandemic, our government has committed to going hard and going early, cushioning the blow for households and businesses, and kick-starting the recovery on the other side," Finance Minister Grant Robertson told Parliament this week.

It may be working. The massive $62.1 billion of fiscal stimulus and the Reserve Bank's $60 billion near-zero interest rate policy and quantitative easing programme, combined with a much quicker return to normality, is helping cushion the blow and economists are starting to dial back their dire warnings. Fears of 3700 job losses in Rotorua in wake of Covid-19. Rotorua is set to lose more than 3700 jobs in the fallout of Covid-19, resulting in $186 million in lost earnings, according to a new report. Photo: 123RF The Infometrics report, Economic impacts of Covid-19 on the Rotorua economy, was commissioned by Rotorua Lakes Council and focused specifically on the Rotorua district.

The 34-page report, and a related webinar with Infometrics experts, cost the council $9775. It forecast a 7.8 percent contraction of the local economy. Local unemployment could rise to 10.7 percent, it said. Top of South Island has country's highest rate of jobless in under 30s. Nelson's mayor has sounded a dire warning about the climbing rate of jobless in the top of the South Island. Photo: RNZ The region had until recently one of the country's lowest rates of unemployment, but Rachel Reese said that trend was now in reverse. COVID-19 economic response. The Treasury is leading work across the whole of government to cushion whanau and families, workers, businesses and communities against the impacts of COVID-19 position New Zealand for recovery, and reset and rebuild our economy to support long-term recovery.

How Covid-19 will damage the economy, according to Treasury. : The harvest bubble 'flogging the wifi' as hand picking starts to wrap. Many seasonal workers in Marlborough's wine industry are also stuck at home on Coronavirus lockdown as hand harvesting of grapes comes to an end. All non-essential businesses were to close when the country moved to alert level 4 on March 25, but people working in the grape harvest were categorised an essential service as part of food and beverage production. Dairy and horticulture sectors trying to attract unemployed Kiwi workers. Horticultural labour shortage could mean food shortage, industry warns. 'We're hidden' - unemployed man one of many denied benefit help.

A Canterbury man who cannot find work or access a benefit says he is part of a growing group of New Zealanders whose unemployment is hidden from any official figures. Government preparing for 300,000 new benefit applications - leaked documents. This story was originally published on RNZ.co.nz and is republished with permission. : 50pc more youth on unemployment benefit, more job losses predicted. 19 Coronavirus: SkyCity plans to shed another 700 staff. Unemployment data show slight increase before lockdown. The Bulletin: Disconnect between unemployment and rural worker needs. State of the nation: SEEK reports extreme impact on job market by COVID-19. -19 Already Shaking Up The Jobs Market. : Thousands of jobs advertised, thousands more looking for work. -19 level 4 lockdown: How has it been for Manurewa? Statistics New Zealand says unemployment edged up to 4.2% at the end of the March quarter from 4% previously. Weekly Webinars: Infometrics COVID-19 coverage.