Businesses want minimum wage increase postponed. Businesses are asking the government to defer the minimum wage rise - scheduled to go up tomorrow - but workers do not agree. 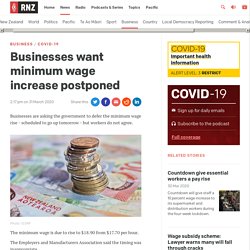 Photo: 123RF The minimum wage is due to rise to $18.90 from $17.70 per hour. The Employers and Manufacturers Association said the timing was inappropriate. "In the middle of what's going on, the timing's just awful. We do know and accept that it's a key policy plan for the government but businesses at the moment are struggling to keep the doors open and keep their staff employed," head of Advocacy and Strategy Alan McDonald said. He said the EMA wanted the raise postponed. "It's difficult to get a handle on how long and how deep this particular crisis will go on but we think six months as a minimum, maybe nine… it could be a year. " If you have symptoms of the coronavirus, call the NZ Covid-19 Healthline on 0800 358 5453 (+64 9 358 5453 for international SIMs) or call your GP - don't show up at a medical centre.

Businesses want minimum wage rise delayed. Jacinda Ardern rules out delaying minimum wage increase amid COVID-19 economic pressure. "Also, we have to keep in mind that what we need people to keep doing is continue to spend and consume," Ardern added, which she said is "part of keeping the economy ticking over". 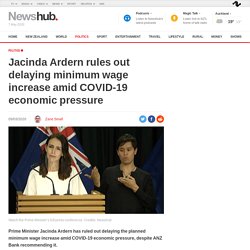 David Seymour is planning to lobby New Zealand First to try and delay the scheduled minimum wage increase to help struggling businesses amid the coronavirus economic slowdown. The ACT Party leader is urging the Government to delay the $1.20 increase to the minimum wage on April 1, in the face of "deteriorating economic conditions", and he believes New Zealand First might be able to help. "It's not a bad idea. They've got to do something useful before they leave Parliament," Seymour told Magic Talk on Monday. "I might write to them to see - if they can't suggest it. " New Zealand First did not respond to Newshub's request for comment before this article was published. 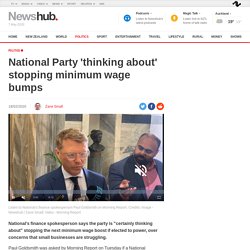 "The point I'd make is everybody wants higher wages and higher incomes, but ultimately if they want to be sustainable, they have to be backed by productivity growth," Goldsmith said. "What we've seen in New Zealand in recent years is we haven't seen much productivity growth... You can keep on increasing wages, but if the productivity doesn't follow, then there is an inevitable pressure on companies. " He said the National Party will provide more policy clarity later in the year in a proposed business relief package. Just in from ANZ, NZ's largest banks: 'Scrapping this year’s minimum wage rise seems like a no-brainer given the pressure on businesses.' The bank's Cheif economist @sharon_zollner added: 'It’s time for the Government to up the ante on fiscal policy'.

: Business expert condemns Government decision to raise minimum wage amid pandemic. "Because if some of these costs are imposed on businesses that are already struggling there won't be jobs there - and that's the bottom line. 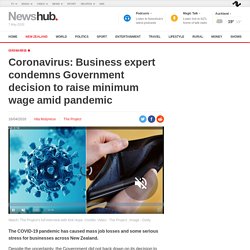 " Hope's opinion is backed by other big players in New Zealand's business world. Security worker 'grateful' for minimum wage rise. Lavinia Kafoa has been earning the minimum wage for 25 years. 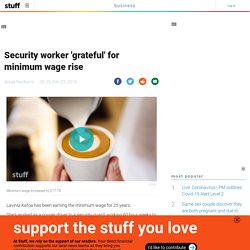 She's worked as a courier driver to a security guard, working 60 hour weeks to make ends meet. The minimum wage rose from $16.50 to $17.70 in April 2019, and next year will rise further to $18.90 next year. The single mother said after rent, bills, repayments on her car and furniture, some weeks she had just $50 left in the bank. "I have to budget, especially around Christmas. I explain to my sons that mum has to work more hours to earn more money so we can afford everything we need," Kafoa said. "We're struggling at the moment but I bought them small presents because I don't want them to think mum doesn't love them. " READ MORE: * New Zealand's minimum wage will rise to $18.90 in 2020 * Time for government to get on with it with Fair Pay Agreements, says union head * Poorly paid and under trained - hospital guards. Stuart Nash and Mark Mitchell debate minimum wage increase. Warnings minimum wage increase could decimate employers. There are renewed calls for the Government to defer a $1.20 increase to the minimum wage on the eve of it coming into effect. 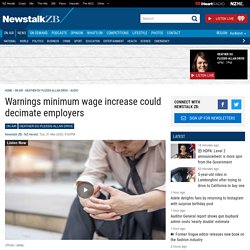 Tomorrow the minimum wage is set to move from $17.70 to $18.90 - this would see fulltime low-income workers take home an extra $48 a week before tax. One union says the increase is vital for the hundreds of thousands of workers doing it tough and whose lives are hard at the best of times. But business groups and the Opposition say employers are struggling to keep staff on under the Covid-19 lockdown, let alone pay them, as many sectors had zero revenue. E tū assistant national secretary Annie Newman said low-wage workers spent the largest chunk of their wages in the local economy which would be vital for stimulating the economy. And increasing the minimum wage would help many of the essential workers on the Covid-19 frontlines, like security and cleaning staff.

"These workers get up every day to make sure our communities are safe and healthy. Minimum wage increase expected to hit businesses hard. Mike Hosking reckons: Minimum wage increase will be terrible for everyone « The Standard. Like an obnoxious uncle who has drunk too much at Christmas Mike Hosking continues to loudly broadcast his reckons on all the things that are terrible with this country and with this Government. 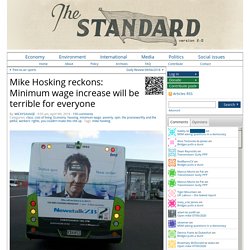 Like how they and Auckland Council want to stop him driving his maserati and will force him in the near future to live in an apartment with no windows and (gasp) no parking spaces for his cars. This is personal for him. There is no way he will let the Government take his car keys from him while he still draws breath. He has lots of other reckons. His qualification for having all these reckons and saying them loudly is that he is a rich white male and so of course his reckons should all be listened to because they are right reckons. And his basic reckon is that being rich is good and being poor is for losers. Unsurprisingly he thinks that putting up the minimum wage is a very bad thing. Costs are market-driven, market and demand.

Take that poor people. But don’t take my word for it. Related. Government slammed for rising minimum wage. The Southland Chamber of Commerce has joined others in calling for the minimum wage increase to be postponed, saying it's just another pressure during the lockdown period that business owners don't need. 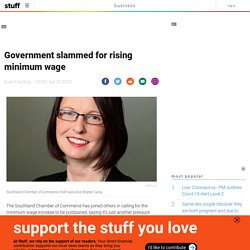 However, Invercargill's Labour List MP Liz Craig says much of the minimum wage increases are likely to be spent locally which will provide a boost to the Southland economy. The minimum wage will rise from $17.70 to $18.90 on Wednesday, as planned. The increase is the second in a series minimum wage hikes over three years which will result in an overall 20 per cent increase to the lowest paid workers. Southland Chamber of Commerce chief executive Sheree Carey said cashflow was becoming harder to manage for businesses and adding the extra costs now would not help.