Gotcha. Checks. Restart. In the American South, a Perfect Storm Is Gathering. As it turns out, they don’t. 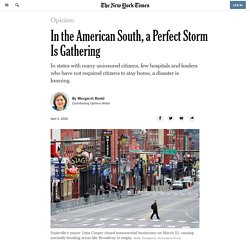 Last week I arrived to pick up a to-go order I’d paid for on the phone and that the owner had promised to put directly into the trunk of my car. But where I expected to find a deserted parking lot, it was business as usual on a sunny spring Saturday. Nashville has received hundreds of reports of similar violations. Blame China, WHO, ... Denial and dysfunction plagued U.S. government as coronavirus raged. Bad News Wrapped in Protein: Inside the Coronavirus Genome.

Vaccines & Antivirals. Current events. Politics. Cornered. Elections have consequences. The coronavirus reaction shows we’re now living with them. Lockdown. Fact Check: Trump's Claims About His Response to the Coronavirus. Why outbreaks like coronavirus spread exponentially, and how to “flatten the curve” - Washington Post.

Our bitterly divided House has done the right thing to address the coronavirus crisis. Infighting, missteps and a son-in-law hungry for results: Inside the Trump administration’s troubled coronavirus response. Older Americans are more worried about coronavirus — unless they’re Republican. NPR Choice page. 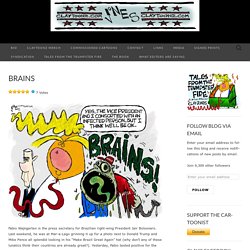 Last weekend, he was at Mar-a-Lago grinning it up for a photo next to Donald Trump and Mike Pence all splendid looking in his “Make Brazil Great Again” hat (why don’t any of these lunatics think their countries are already great?). Hopes of bipartisan deal rise as White House, Democrats negotiate coronavirus relief. Who could have predicted Trump would be such a bad crisis manager? Everyone, actually. Live updates: U.S. markets dive, trading suspended after Trump’s coronavirus travel ban fails to calm investors. President Trump botched his own coronavirus address. He shouldn’t be on live TV. What Will You Do If You Start Coughing? - The Atlantic - Medium. “The sensitivity can be less than 100 percent and still be very useful,” Ko says, in many cases. 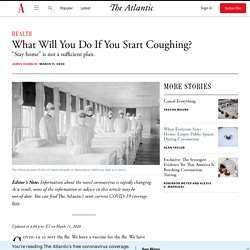 But as that number falls, so does the usefulness of any given result. In China, the sensitivity of tests has been reported to be as low as 30 to 60 percent—meaning roughly half of the people who actually had the virus had negative test results. Using repeated testing was found to increase the sensitivity to 71 percent. But that means a negative test still couldn’t fully reassure someone like the teacher that he definitely doesn’t have the virus. 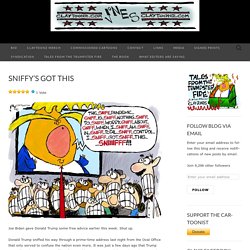 Shut up. Donald Trump sniffed his way through a prime-time address last night from the Oval Office that only served to confuse the nation even more. Tax The Monkey. There’s one thing Donald Trump fears more than anything and no, I’m not talking about stairs, rain, wind, or sharks. 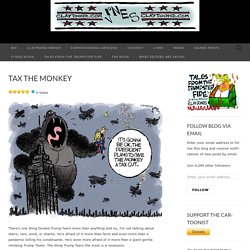 He’s afraid of it more than facts and even more than a pandemic killing his constituents. He’s even more afraid of it more than a giant gorilla climbing Trump Tower. The thing Trump fears the most is a recession. No president wants a recession but it’s especially worse for Donald Trump because he doesn’t know what he’s doing. In the modern era, recessions cut short the presidencies of Jimmy Carter and George H. As Americans take virus precautions, Trump flouts advice. WASHINGTON – At the Pentagon, top military brass have been begun “social distancing“ to avoid spreading disease. 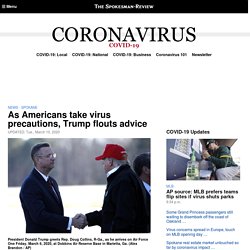 At the Capitol, legislators have been encouraged to forgo hand shakes and flash the “Star Trek” Vulcan greeting instead. But at the White House, President Donald Trump is flouting his own government’s advice on how to stay safe. He continues to shake hands with supporters and visitors, hold large events and minimize the threat posed by a coronavirus outbreak that has infected more than 115,000 people and killed over 4,000 worldwide.

Public health officials said Trump was sending the wrong message with his behavior and potentially putting the public at risk by sowing confusion and undermining efforts to keep people safe, especially if the situation grows worse. VIDEO: The Coronavirus Is The Pin Popping The 'Everything Bubble' For years, Peak Prosperity has been raising a loud warning of the ‘Everything Bubble’ that the world’s central banks have blown in global asset prices. 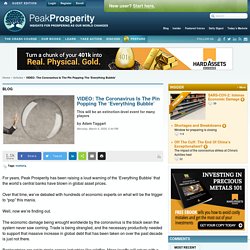 Over that time, we’ve debated with hundreds of economic experts on what will be the trigger to “pop” this mania. Well, now we’re finding out. The economic damage being wrought worldwide by the coronavirus is the black swan the system never saw coming. Trade is being strangled, and the necessary productivity needed to support that massive increase in global debt that has been taken on over the past decade is just not there. Daily Digest 3/10 - Calm Returns To Markets After Share Turmoil, The U.S. Isn’t Ready For Coronavirus. Economy Calm returns to markets after share turmoil (TS)On Monday, the major US stock indexes fell so sharply at the start of trading that the buying and selling of shares was halted for 15 minutes, as a so-called “circuit breaker” aimed at curbing panicky selling came into effect.However, in early trade on Tuesday the Dow Jones Industrial Average was up 2.7%. 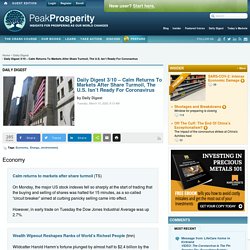 The coronavirus: A warning from Peter Daszak, the scientist who saw it coming. Peter Daszak is a zoologist who works in China and runs the EcoHealth Alliance, an organization that studies the connections between human and wildlife health. 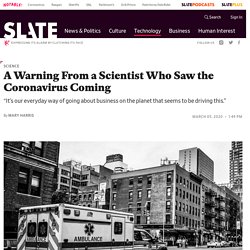 So coronaviruses, like the new one that’s spreading right now, are one of his areas of expertise. A few years back, Daszak was working with the World Health Organization, plotting out what the next global pandemic could look like, when he and some other scientists came up with the idea of “Disease X.” Disease X would hit this epidemiological sweet spot: It would transmit easily from person to person, and it would be deadly, but not too deadly.

Even though scientists like him knew this sort of virus was coming, the world didn’t get ready, not soon enough. Incompetence Exacerbated by Malevolence. Now, however, the disease known as COVID-19 has upended this theme altogether. 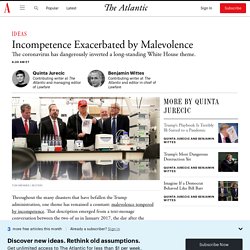 It makes things worse. The “incompetence” portion of the current situation is all too easy to identify. Untitled. What Really Inflamed the Coronavirus Epidemic - Issue 81: Maps. Last year, in late December, Li Wenliang, a young ophthalmologist, wrote 150 of his friends from medical circles. He said he had seen a number of cases of viral pneumonia come into the Wuhan Central Hospital, where he worked, and that they all seemed linked to the Huanan Seafood Market, the main source for restaurants in Wuhan, a metropolis of 11 million people, and the most important city of the central regions of China. Five weeks later, Li was dead, at 34, killed by the same virus about which he warned his friends in the same hospital that had warned him not to tell people what was happening. An online tidal wave of reflection and grief that I’ve never seen before resulted. My own personal WeChat feed was flooded with comments and tributes to him, ranging from poems to cartoons of him eating his favorite meal of fried chicken.

The rage was directed largely at Wuhan city officials. Also in Health. Good Morning America, All Heck Broke Loose in the Markets Overnight. Crude Oil Collapses 32%, US Stock Futures Plunge nearly 5%, 10-year Treasury Yield Gets Closer 0%, Gold Jumps to $1,700, Asian Stocks Plunge, Nikkei -6%. By Wolf Richter for WOLF STREET. WTI crude oil futures collapsed by 32.3% on Sunday evening, to $27.96 a barrel at the moment, the lowest since the darkest oil-bust days of February 2016: This plunge comes after Saudi Arabia’s Aramco announced it would slash prices to its customers for April.

In addition, there were strategically placed rumors that Aramco would also increase production from the current 9.7 million barrels per day to 10 million barrels per day when the previously agreed production cuts expire at the end of March. This is its move in a price war with Russia over market share. Trump’s Coronavirus Press Event Was Even Worse Than It Looked. How the Trump administration squandered time and lost control of the coronavirus crisis.

The world gets ready - Covid-19 is now in 50 countries, and things will get worse. Covid-19 Is Traveling Along the New Silk Road