The resources below aims to give a deep understanding of Social Psychology Bystander effect and ways to counteract it from the perspective of the general public.

While we might all like to believe that this is true, psychologists suggest that whether or not you intervene might depend upon the number of other witnesses present. Implicit Bystander Effect. What Is the Bystander Effect? How Diffusion of Responsibility Affects Group Behavior. Diffusion of responsibility is a psychological phenomenon in which people are less likely to take action when in the presence of a large group of people.1 For example, imagine that you are in a large city on a bustling street.

You notice a man fall to the ground and start convulsing as if having a seizure. Many people turn and look at the man, but no one moves to help or call for medical assistance. Why? Because there are so many people present, no one person feels pressured to respond. Bystander effect - Diffusion of responsibility. New York Today: The City’s Bystander Effect. Good morning on this clear Monday. 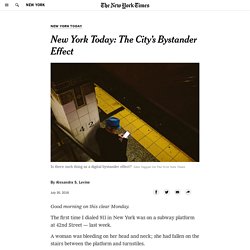 The first time I dialed 911 in New York was on a subway platform at 42nd Street — last week. A woman was bleeding on her head and neck; she had fallen on the stairs between the platform and turnstiles. Some passengers hurried past her. Others stopped to look and moved on. Several took out their phones — not to call for help, but instead to record the scene. Maybe you’ve witnessed a similar episode in the city:curious onlookers who hesitate to act, or opt not to do anything at all. It’s often what psychologists call “the bystander effect.” “It’s a general term for people not reacting, when they’re in a group, to some sort of situation that might call for a reaction — where responsible intervention would be the right call, but no one is intervening,” said Katherine Fox-Glassman, a lecturer in the department of psychology at Columbia University, whose research has focused on judgment, decision-making and risk perception.

Here’s what else is happening: The bystander effect: Why didn't anyone help? A country of bystanders. In 1968, U.S. psychologists John Darley and Bibb Latane conducted a famous experiment. 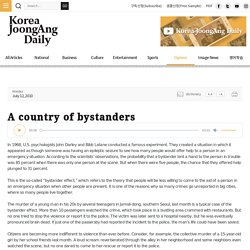 They created a situation in which it appeared as though someone was having an epileptic seizure to see how many people would offer help to a person in an emergency situation. According to the scientists’ observations, the probability that a bystander lent a hand to the person in trouble was 85 percent when there was only one person at the scene. But when there were five people, the chance that they offered help plunged to 31 percent. Singaporean Eye Power (feat. Steven Lim) How to Overcome the Bystander Effect. Psychologists have long been interested in exactly why and when we help other people.

Imagine that you are walking into a large department store. Being Observant Being Skilled and Knowledgeable Guilt Feeling Good. Overcoming BANE in Alochol poisoning. Bystander effect: Training in skills makes people more willing to help, Letters in Print News. How to be kinder to strangers in Singapore, Opinion News.

The Charities Aid Foundation recently released the World Giving Index 2017, which provides insight into the scope and nature of giving around the world. Based on data collected from the Gallup World Poll, the index, which polled 1,000 individuals in each representative country, revealed two surprising facts. Myanmar, Indonesia and Kenya turned out to be among the most charitable countries, even though they have a huge number of their populations living below the poverty line. Being poor does not stop one from being generous. Wealthy countries such as the United States, Canada, New Zealand, Australia and the United Arab Emirates also feature in the top 10.

Myanmar, the top country for four years in a row, has a poor human rights record, in part because of its treatment of the Rohingya Muslims. Singapore, ranked 30, is behind Indonesia (2), Myanmar (1) and Thailand (15), but streets ahead of Cambodia (134), Vietnam (116) and the Philippines (54) in Asean. Changing our mindset. Singaporean Eye Power (feat. Steven Lim)