What propelled it wasn’t the crime or the investigation, but the press coverage that alleged the murder had many witnesses who refused to come to the Kitty Genovese’s defense. This has been disproved over time, but not before it became part of the accepted lore of the crime. Kitty Genovese was returning from work home at around 2:30 a.m. on March 13, 1964, when she was approached by a man with a knife. Genovese ran toward her apartment building front door, and the man grabbed her and stabbed her while she screamed. A neighbor, Robert Mozer, yelled out his window, “Let that girl alone!”

Genovese, seriously injured, crawled to the rear of her apartment building, out of the view of any possible witnesses. She was found by neighbor Sophia Farrar, who screamed for someone to call the police. Are We Victims Of "Bystander Effect"? Shock. Fear & Uncertainty. Diffusion of Responsibility. Lack of Qualifications. Not wanting to get involved. Misconceptions. How to Break the Bystander Effect. They could have left it to someone else.

An Army veteran blocked a shooter in Oregon from entering his classroom. Three friends on a high-speed train from Paris to Amsterdam helped stop a gunman wielding an AK-47. This past spring, an Army captain in North Carolina pulled a couple to safety after a fiery car crash. Were these men instinctively courageous, or had they learned to be?

The Army captain (aptly wearing a Captain America T-shirt) credited his military training for knowing what to do and remaining calm. These heroes are dramatic examples. Man slashed & robbed at Tanglin Halt claims witnesses "did nothing to help" - Mothership.SG - News from Singapore, Asia and around the world. A 58-year-old man was recently arrested for his suspected involvement in a case of armed robbery. 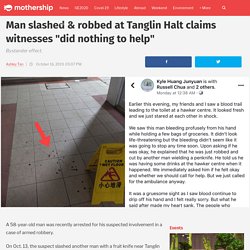 On Oct. 13, the suspect slashed another man with a fruit knife near Tanglin Halt Road, and managed to get away with the victim's mobile phone as well. The suspect was arrested on the same day and was subsequently charged in court two days after the incident. However, a Facebook post which surfaced recently revealed more details of what had happened that evening. One Kyle Huang Junyuan shared that he was with a group of friends at Tanglin Halt Market on the evening of Oct. 13. They then spotted a blood trail leading to the hawker centre's toilet, and the trail appeared fresh.

Following it, they came across a middle-aged looking man holding a few bags of groceries and "bleeding profusely" from the hand. According to Huang, the injury "didn't look life-threatening but the bleeding didn’t seem like it was going to stop any time soon. " You can view the original post here. Or read his full story here: Singaporean Eye Power (feat. Steven Lim) More bystanders responding to CPR incidents thanks to 3 public health interventions: Study, Singapore News.

SINGAPORE - A study has found that three measures, when applied together, have more than doubled the likelihood of bystanders performing cardiopulmonary resuscitation (CPR) on cardiac arrest victims in Singapore. Dispatch-assisted CPR, CPR and automated external defibrillator training, and the Singapore Civil Defence Force's myResponder app were found to have increased the responses of bystanders giving life-saving assistance to heart attack victims before paramedics attended to them. Dispatch-assisted CPR refers to CPR that is administered under the guidance of a first responder, such as a paramedic who may, through a phone call, assess the situation and give instructions to a bystander, who then performs CPR. The study was conducted by researchers at the Duke-NUS Medical School, Duke University, and several organisations here, and published in August. 1. Witnessing Helping Behaviour. 2. Being Observant. 3. Knowledge to help. How to Overcome the Bystander Effect.