The greatest mystery of the Inca Empire was its strange economy 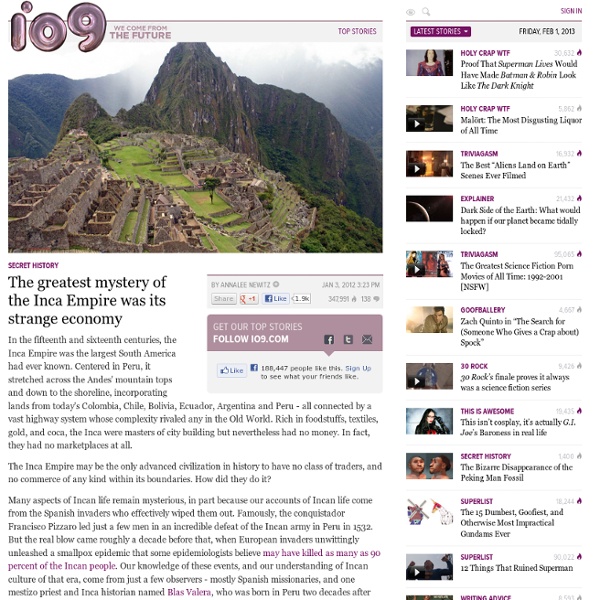 A Spectacular List of 240+ Tips, Tricks and Resources for Content Marketing From beginners to old-hats, we all have something to learn about content marketing. We know you have better things to do than spending your days scouring the web for the info you need, so we’ve taken the liberty of doing that for you. Behold our epic list of the very best tips, info and resources to kick-start your content marketing strategy. Understanding content marketing Using content marketing for SEO results Tips for setting up an editorial calendar Building followers on social networks Building an email subscription list Creating effective calls to action Generating content ideas Tool to help you find content Clipboard (Bookmarking service)News.me (News curator)Curate Me (News curator)StumbleUpon (Social discovery service)Strawberryj.am (Social link curator) Must-see slide presentations Must-read blogs Must-follow Twitter users Must-circle Google+ users Must-listen podcasts Must-join LinkedIn groups Must-follow Pinterest boards Best brands using Instagram for content marketing Slideshows

6 Ancient Sports Too Awesome For the Modern World While the Ancient Greeks are often credited with inventing Western Civilization, they were also responsible for a brutal sport called Pankration, which was basically the first mixed-martial art and was totally not gay. As you can see, there is absolutely nothing gay about Pankration. The "Game" Pankration was a lot like modern MMA, except there were no rules, no rounds, no rests and--in an interesting twist on Mortal Kombat--killing your opponent resulted in an instant loss. Congratulations on the victory, Jax. How is that "Insane"? The idea was to get as close as you could to killing a guy without actually killing him, using an arsenal of strikes, takedowns, grapples, chokeholds, hyperextensions and movies starring Nia Vardalos. However, if the person you were fighting died, it meant he had bigger balls than you because he refused to quit. "Wait, what are you... The Fisherman's Joust Well, for several reasons... These guys aren't even jousting. Also, there's blood.

Top 10 Most Overlooked Mysteries in History Mysteries Over the last few months we have gone through 30 of the worlds greatest mysteries but what we haven’t covered are ancient mysteries. This list aims to put that right! Here are ten great unsolved mysteries of science. Do you have a theory that might solve one of these mysteries? 10. While many people know of the Moai of Easter Island, not that many people know of the other mystery associated with Easter Island. 9. In the late 2nd century AD, the Greek writer Pausanias wrote an account of how (4-500 years earlier?) 8. This mystery may even be a problem for those legendary investigators from CSI and the like! 7. The Minoans are best known for the legend of Theseus and the Minotaur, but it is in fact the demise of this once-great civilisation that is more interesting. 6. Everyone has heard of Stonehenge, but few know the Carnac Stones. 5. The historical search for the legendary thief Robin Hood has turned up masses of possible names. 4. 3. 2. 1. Jamie Frater

Ancient Sumer with thanks to The History GuideWhat is good in a man's sight is evil for a god, What is evil to a man's mind is good for his god. Who can comprehend the counsel of the gods in heaven? The plan of a god is deep waters, who can fathom of it? Where has befuddled mankind ever learned what is a god's conduct?Before CivilizationBetween 9000 B.C. and the beginning of the Christian era, western civilization came into being in Egypt and in what historians call Ancient Western Asia (modern-day Cyprus, Syria, Lebanon, Israel, Jordan, Turkey, south-western Russia, Iraq and Iran). The city-state was Sumer's most important political entity.

'Lost' Medieval City Discovered Beneath Cambodian Jungle A lost city known only from inscriptions that existed some 1,200 years ago near Angkor in what is now Cambodia has been uncovered using airborne laser scanning. The previously undocumented cityscape, called Mahendraparvata, is hidden beneath a dense forest on the holy mountain Phnom Kulen, which means "Mountain of the Lychees." The cityscape came into clear view, along with a vast expanse of ancient urban spaces that made up Greater Angkor, the large area where one of the largest religious monuments ever constructed — Angkor Wat, meaning "temple city" — was built between A.D. 1113 and 1150. [See Images of Angkor Wat, New Temple City] Aerial view of Angkor Wat, showing the moat and causeway and the central tower surrounded by four smaller towersCredit: Alexey Stiop | Shutterstock.com Traces of temples In a series of archaeological mapping projects, scientists had previously used remote sensing to map subtle traces of Angkor. Lost medieval city Weird landscape

Why the multimillion dollar retirement is not for the middle class At their most self-indulgent, the theological scholars of the Renaissance were mocked for abandoning the debate over moral decisions to bicker about how many angels could dance on the head of a pin. The scholars of personal finance seem on track for a similar level of disconnection from reality. Take this new study, in the Financial Analysts Journal, that says "retirement is not hopeless." The authors of the study assume you will live to be 100 years old, by the way, if not 105 years old. The Wall Street Journal breezily calls this arrangement "retiring on your own terms." You can call it retiring on your own terms, the same way you can call buying a private jet and a ranch in Telluride, Colorado living on your own terms – the terms, that is, of fantasy and not reality. It's simply a math problem. Now you have to save that money as well as living on it. Then the final 20% goes to saving for retirement. This is a reasonable budget. Only a mere 110 years. That's a far-fetched expectation.

The List: 5 Great American Swimming Holes Wherever there is water, there are swimming holes, and wherever there is sun and heat and summer afternoons, there are people swimmin’ in them. A truly comprehensive list of American swimming holes would fill the internet and blow more than a few secret stashes — with just five, our list is designed mostly to inspire. Enjoy! This not-so-secret oasis in the middle of the Arizona desert is far and away the most enjoyable hike on the list. Located a stout 11 miles from civilization, there are only two ways to reach the falls — by helicopter or a long desert slog. Getting There: Park at the lot at Hualapai Hilltop, about 100 miles from the closest town, Seligman, Arizona. If you’ve watched clips from the Red Bull world diving championships, you already know this is one of the best diving spots in Southern California. Getting There: From San Bernardino, take State Road 18 for 18 miles to Crest Park. This is why you come to Hawaii. Getting There: Take the main Hana Highway east toward Hana.

11 Things You May Not Know About Ancient Egypt — HISTORY Lists Ancient Egypt stood as one of the world’s most advanced civilizations for nearly 3,000 years and created a culture so rich that it has spawned its own field of study. But while Egyptian art, architecture and burial methods have become enduring objects of fascination, there is still a lot you probably don’t know about these famed builders of the pyramids. From the earliest recorded peace treaty to ancient board games, find out 11 surprising facts about the Gift of the Nile. Along with King Tut, perhaps no figure is more famously associated with ancient Egypt than Cleopatra VII. For over two centuries the Egyptians fought against the Hittite Empire for control of lands in modern day Syria. After a long day’s work along the Nile River, Egyptians often relaxed by playing board games. While they may have been publicly and socially viewed as inferior to men, Egyptian women enjoyed a great deal of legal and financial independence.