Variation theory: A theory of learning and a useful theoretical framework for chemical education research - Chemistry Education Research and Practice (RSC Publishing) DOI:10.1039/C2RP20145C. Received 24th October 2012 , Accepted 26th November 2012 First published on 11th December 2012 Instructors are constantly baffled by the fact that two students who are sitting in the same class, who have access to the same materials, can come to understand a particular chemistry concept differently. Variation theory offers a theoretical framework from which to explore possible variations in experience and the resulting differences in learning and understanding. According to variation theory, there are a limited number of features of a given phenomenon to which we can pay attention at any given time. Pillar 1: Flexible Environment Archives. Journal Keeping : How to Use Reflective Writing for Effective Learning, Teaching, Professional Insight, and Positive Change.

The Guide to Learning and Study Skills : For Higher Education and at Work: EBSCOhost. Writing, Technology and Teens. Teenagers’ lives are filled with writing. 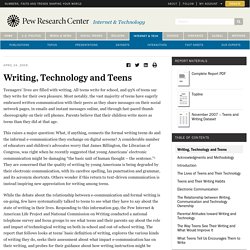 All teens write for school, and 93% of teens say they write for their own pleasure. Most notably, the vast majority of teens have eagerly embraced written communication with their peers as they share messages on their social network pages, in emails and instant messages online, and through fast-paced thumb choreography on their cell phones. Parents believe that their children write more as teens than they did at that age. This raises a major question: What, if anything, connects the formal writing teens do and the informal e-communication they exchange on digital screens? Writing, Technology and Teens. Teenagers’ lives are filled with writing. 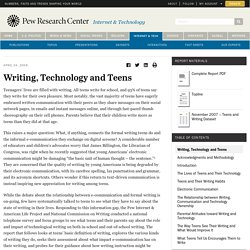 All teens write for school, and 93% of teens say they write for their own pleasure. Most notably, the vast majority of teens have eagerly embraced written communication with their peers as they share messages on their social network pages, in emails and instant messages online, and through fast-paced thumb choreography on their cell phones. Parents believe that their children write more as teens than they did at that age. This raises a major question: What, if anything, connects the formal writing teens do and the informal e-communication they exchange on digital screens?

A considerable number of educators and children’s advocates worry that James Billington, the Librarian of Congress, was right when he recently suggested that young Americans’ electronic communication might be damaging “the basic unit of human thought – the sentence.” At the core, the digital age presents a paradox. What Teens Tell Us Encourages Them to Write. Introduction Prevailing wisdom holds that the US is facing an educational crisis marked by low levels of writing skill. 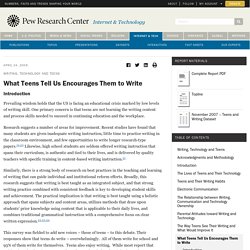 One primary concern is that teens are not learning the writing content and process skills needed to succeed in continuing education and the workplace. Babies who hear two languages at home develop advantages in attention. Six-month-old babies who are brought up hearing more than one language show advantages in early development of attention TORONTO, Jan. 30, 2019 – The advantages of growing up in a bilingual home can start as early as six months of age, according to new research led by York University’s Faculty of Health. 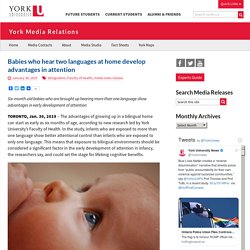 -Programme > Programme 2016-2019 > Quality assurance and implementation of the CEFR. Weekly digest for Adaptive Learning in ELT, on May 25, 2020 - claudia.mewald - Gmail. Adapting Classroom-based Strategy Instruction to a Distance Learning Context. September 2003 — Volume 7, Number 2 Vee Harris Goldsmiths College, University of London <v.harris@gold.ac.uk> Abstract The role of language learning strategy instruction (SI) in promoting learner autonomy is widely recognised (Wenden, 1991; Little, 1994; Cohen, 1998) and a consensus is emerging over how best to implement it. 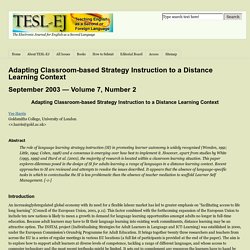 However, apart from studies by White (1995, 1999) and Hurd et al. (2001), the majority of research is located within a classroom learning situation. Recherche-Tutorials - Universitätsbibliothek Wien. Bloom's Taxonomy Revised - The Second Principle. Understanding the Revised Version of Bloom’s Taxonomy ©Leslie Owen Wilson (2019, 2016, 2013, 2005, 2001) Contact Leslie A succinct discussion of the revisions to Bloom’s classic cognitive taxonomy by Anderson and Krathwohl and how to use them effectively Background: 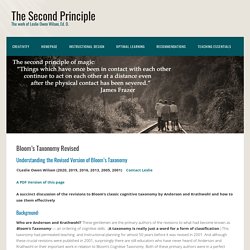 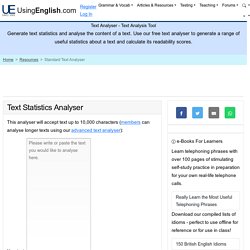 Use our free text analysis tool to generate a range of statistics about a text and calculate its readability scores. Adam "I simply wanted to thank you on the great text analyser and its robustness. It has certainly sped up my work. " Manar. Startseite. A. 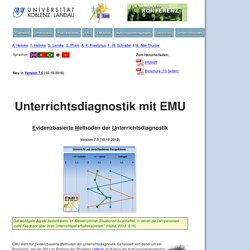 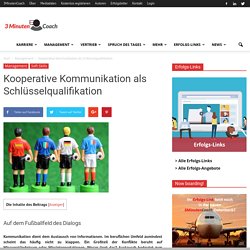 This year will go down in history as a milestone year for the teaching profession. 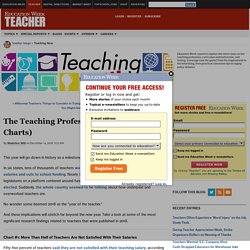 In six states, tens of thousands of teachers walked out of their classrooms to protest low salaries and cuts to school funding. Nearly 180 current classroom teachers ran for their state legislatures on a platform centered around funding education, and 43 of those teachers were elected. Suddenly, the whole country seemed to be talking about how underpaid and overworked teachers are. Teacher Stress Is Real. How to Avoid Burnout and Stay Motivated. The Learning Policy Institute estimates that between 19 and 30 percent of teachers leave the profession within their first five years.

Yikes! That’s a lot of smart, capable people who have invested in years of training who are leaving the classroom because of teacher stress. But it doesn’t have to be that way. There are ways to inspire your practice and mindset to avoid burnout. Here are seven dos and don’ts that will help you stay refreshed and motivated in this crazy-hard (yet infinitely rewarding) profession. Teaching – An Anthropocene Primer. An Anthropocene Primer Syllabus in the Literature ClassroomDavid Rodriguezdavid.m.rodriguez@stonybrook.edu I am particularly fond of “an” in the title An Anthropocene Primer as a signal that it is a medium that suggests use rather than determines use.

The precise definition of the term “Anthropocene” is debated, so the variety of routes and approaches–rather than an implicit argument about golden spikes or timelines–is an effective way to communicate, to students in particular, that the participation in discourse relating to the Anthropocene is part of the present constitution of its meaning.

I think my students were also interested in this open approach, which they curiously identified and formulated that An Anthropocene Primer “lacks bias.” This impression, I suppose, likening the site to the experience of an encyclopedia even though it looks much different, toned their encounter with it. Teaching the Anthropocene - PacificEdge. HOW DO YOU EXPLAIN where we are in history and how we got here? How do you tell the story of the Anthropocene in a Living Smart course? Teaching professionalism – Why, What and How. Starter Teachers: A methodology course for the classroom. A guide to ontology, epistemology, and philosophical perspectives for interdisciplinary researchers. Community member post by Katie Moon and Deborah Blackman How can understanding philosophy improve our research?

How can an understanding of what frames our research influence our choices? Do researchers’ personal thoughts and beliefs shape research design, outcomes and interpretation? These questions are all important for social science research. Here we present a philosophical guide for scientists to assist in the production of effective social science (adapted from Moon and Blackman, 2014). Understanding philosophy is important because social science research can only be meaningfully interpreted when there is clarity about the decisions that were taken that affect the research outcomes. What is the importance of epistemology in social research? Epistemological Perspectives In Qualitative Research — Lisa Hautly Wellness. Qualitative research provides a wealth of information, often in a natural environment, void of manipulation, to produce organic results (Merriam, 2009).

The information gathered may be used to enhance quantitative results or it may be used to increase background knowledge that would otherwise be difficult to collect through quantitative designs (Muntaner & Gómez, 2003). Ontological and Epistemological Foundations of Qualitative Research. Volume 10, No. 2, Art. 30 – May 2009 Ontological and Epistemological Foundations of Qualitative Research Irene Vasilachis de Gialdino Abstract: The purpose of this paper is to describe the most relevant features of qualitative research in order to show how, from the Epistemology of the Known Subject perspective I propose, it is necessary to review first the ontological and then the epistemological grounds of this type of inquiry.

I begin by following the path that leads from the Epistemology of the Knowing Subject to the Epistemology of the Known Subject, proposed as a new and non exclusive way of knowing. Epistemology - Research-Methodology. Dialogic Pedagogy: An International Online Journal. DPJ is announcing a special issue dedicated to the dialogic pedagogy and undergraduate, graduate and postgraduate supervision/advisement. We are happy to announce a call for abstracts for this special issue that will be published at the beginning of 2020. Dialogic Teaching – A Teacher’s Tool Kit « Lost in Pedagogy. Theory + Anthropology [licensed for non-commercial use only] / The Reflexive Turn. The research paradigm – methodology, epistemology and ontology – explained in simple language.