Timeline of human origins revised. Article created on Thursday, July 3, 2014 Many traits unique to humans were long thought to have originated in the genus Homo between 2.4 and 1.8 million years ago in Africa. 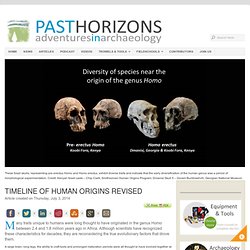 Although scientists have recognized these characteristics for decades, they are reconsidering the true evolutionary factors that drove them. A large brain, long legs, the ability to craft tools and prolonged maturation periods were all thought to have evolved together at the start of the Homo lineage as African grasslands expanded and Earth’s climate became cooler and drier. Oudste resten van moderne mens ontdekt in zuidoost Azië. Wetenschappers hebben in het noorden van Laos een schedel teruggevonden die zeker 63.000 jaar oud is. 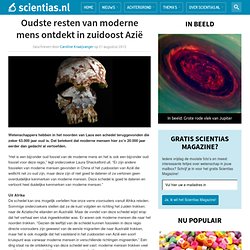 Earliest Evidence of Gigantism-Like Disease Found in 3,800-Year-Old California Skeleton. The remains of a man buried 3,800 years ago in a richly decorated California grave bear some unusual but unmistakable features — a protruding brow, a lantern jaw, thick leg and arm bones, and teeth so crowded together that at one point they erupt in rows three deep. 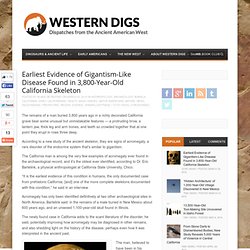 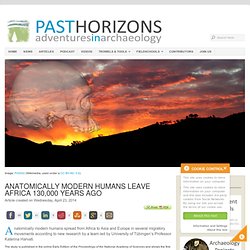 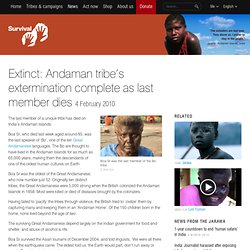 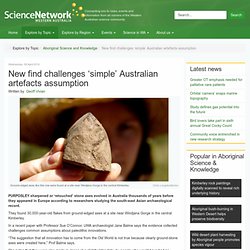 They found 30,000-year-old flakes from ground-edged axes at a site near Windjana Gorge in the central Kimberley. In a recent paper with Professor Sue O’Connor, UWA archaeologist Jane Balme says the evidence collected challenges common assumptions about paleolithic innovations. 14,000 year old flint tools: Earliest human occupation of Scotland. Article created on Wednesday, April 9, 2014 Archaeologists have uncovered the earliest evidence of the presence of humans in Scotland with an assemblage of over 5,000 flint artefacts which were recovered in 2005-2009 by Biggar Archaeology Group in fields at Howburn, South Lanarkshire. 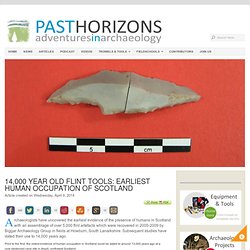 Subsequent studies have dated their use to 14,000 years ago. Prior to the find, the oldest evidence of human occupation in Scotland could be dated to around 13,000 years ago at a now-destroyed cave site in Argyll, northwest Scotland. Similar to finds from northern Germany and southern Denmark. Discoveries Challenge Beliefs on Humans’ Arrival in the Americas. Continue reading the main story Video SERRA DA CAPIVARA NATIONAL PARK, Brazil — Niede Guidon still remembers her astonishment when she glimpsed the paintings. 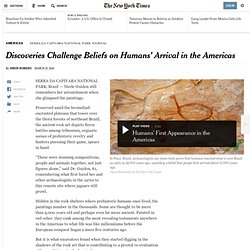 Preserved amid the bromeliad-encrusted plateaus that tower over the thorn forests of northeast Brazil, the ancient rock art depicts fierce battles among tribesmen, orgiastic scenes of prehistoric revelry and hunters pursuing their game, spears in hand. “These were stunning compositions, people and animals together, not just figures alone,” said Dr. Guidon, 81, remembering what first lured her and other archaeologists in the 1970s to this remote site where jaguars still prowl. Climate change caused Indus Valley civilization collapse. DNA Analysis Shows Native Americans Had European Roots. It must have been a pretty special child, otherwise the two-year old wouldn't have been buried in such a ceremonious manner. 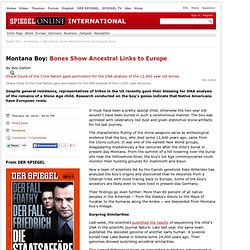 The boy was sprinkled with celebratory red dust and given distinctive stone artifacts for his last journey. The characteristic fluting of the stone weapons serve as archeological evidence that the boy, who died some 12,600 years ago, came from the Clovis culture. It was one of the earliest New World groups, disappearing mysteriously a few centuries after the child's burial in present day Montana. From the summit of a hill towering over the burial site near the Yellowstone River, the boy's Ice Age contemporaries could monitor their hunting grounds for mammoth and bison. Now a team of scientists led by the Danish geneticist Eske Willerslev has analyzed the boy's origins and discovered that he descends from a Siberian tribe with roots tracing back to Europe.

Surpring Similarities A third of both juveniles' DNA can be traced to the earliest European. Empires and slave-trading left their mark on our genes - health - 13 February 2014. Major episodes in history like the rise and fall of the Mongol empire have left indelible marks on our genes. 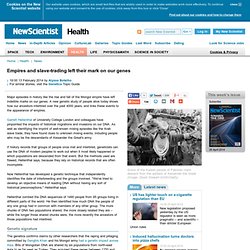 A new genetic study of people alive today shows how our ancestors interbred over the past 4000 years, and links these events to the appearance of empires. Garrett Hellenthal of University College London and colleagues have pinpointed the impacts of historical migrations and invasions on our DNA. As well as identifying the imprint of well-known mixing episodes like the Arab slave trade, they have found clues to unknown mixing events, including people who may be the descendants of Alexander the Great's army. If history records that groups of people once met and interbred, geneticists can use the DNA of modern peoples to work out when it most likely happened or which populations are descended from that event. New dating pushes Atapuerca Homo antecessor to 900,000 BP. Podcast.uctv.tv/vod/5885.mp4. Cro-Magnon by Brian Fagan. 800,000-year-old human footprints found in Norfolk.