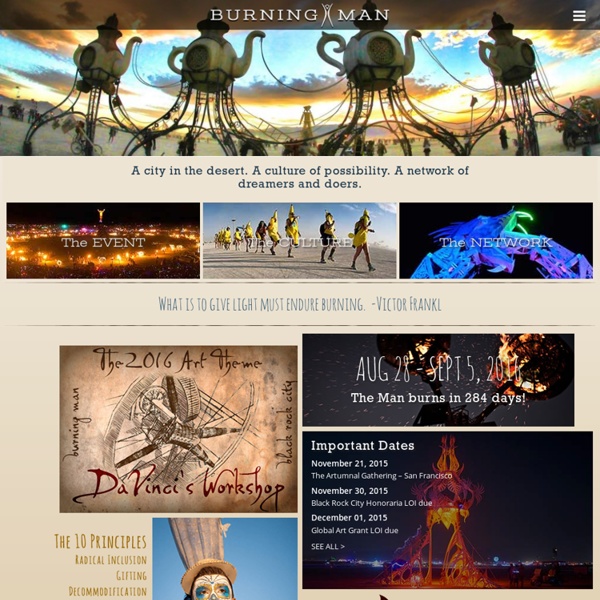 2014 Art Theme: Caravansary For centuries, Silk Route travelers crossed paths in caravansaries, bustling caravan stops offering more than just shelter from the desert wilderness; they were vital centers of cultural exchange, bringing together traders, pilgrims, monks, nomads, traveling entertainers, and wild-eyed adventurers from all points of the compass to share their stories around a common fire. What Is Burning Man? Once a year, tens of thousands of participants gather in Nevada's Black Rock Desert to create Black Rock City, dedicated to community, art, self-expression, and self-reliance. They depart one week later, having left no trace whatsoever. Burning Man is also an ever-expanding year-round culture based on the Ten Principles.

FullVibes Underground Electronic Radio The festival is located at a beautiful camping site in a forest, 80km from Prague, from Friday 1st July 2011 until Wednesday 6th of July 2011. There, you can pitch your tent, park your van or rent one of the many bungalows available for the 5 days of the festival. You will also find a restaurant, bars and delicious food as well as a swimming pool for a refreshing swim during the day, showers, toilets, parking and a spectacular forest surrounding the site. The entire festival will be powered by Noise Control Audio sound systems, the deepest and purest systems in the industry!!Concerts stage 25/30KW - Chillout tent 7KW - Techno Dancefloor 18KW.

Absolutely Incredible Art made with Old Cassette Tapes I’ve got 2 large boxes completely full of old cassette tapes (remember those?) in my closet. There are probably over 400 tapes sitting there, degrading, losing their magnetic information, slowly dissolving into silence, or perhaps more correctly, white noise. Fallacy List 1. FAULTY CAUSE: (post hoc ergo propter hoc) mistakes correlation or association for causation, by assuming that because one thing follows another it was caused by the other. example: A black cat crossed Babbs' path yesterday and, sure enough, she was involved in an automobile accident later that same afternoon. example: The introduction of sex education courses at the high school level has resulted in increased promiscuity among teens.

Hardly Strictly Bluegrass 2014 A number of people have approached us recently regarding the fact that this year’s Hardly Strictly Bluegrass Festival falls on the same weekend as Yom Kippur. When we first realized the conflict, last year, we considered other dates for the event. None were available. The festival takes over a large area of the park, so scheduling is no simple feat. Most of the staff and many of the artists work this event into their calendar, so there was only so much flexibility we had to look at other dates. read more » 44 Amazing Julian Beever’s 3D Pavement Drawings Ready to kill boredom again? This time we present a wonderful collection of amazing 3d sidewalk chalk art by Julian Beever (+- all of his works). But first of all, who is Julian Beever?

David Byrne’s Meltdown David Byrne, the Oscar, Golden Globe, Obie and Drama Desk award-winning musician known for his eclectic collaborations, and as co-founder of seminal new wave band Talking Heads, curates the 22nd Meltdown. Byrne follows in the footsteps of previous directors that include Jarvis Cocker, Patti Smith, David Bowie, Yoko Ono, Ray Davies and Ornette Coleman. 'I am beyond excited at how much of this has fallen into place. It’s quite eclectic and I hope there are some new discoveries for everyone – including me – in this edition of the festival.' United Nations Volunteers: How to volunteer UNV is inspired by the conviction that volunteerism is a powerful means of engaging people in tackling development challenges worldwide. Everyone can contribute their time, skills and knowledge through volunteer action, and their combined efforts can be a significant force for achieving peace and development. Volunteering makes important economic and social contributions, contributing to a more cohesive society by building trust and reciprocity among citizens. It can be both challenging and rewarding and require you to use your skills in a new context. You can also transfer useful knowledge while gaining a greater understanding of the issues affecting other people.