Abolish Daylight Saving Time? Less than 200 years ago, humans organized their daily routines by the sun clock (set by the rotation of Earth), which was in synchrony with their body clock (set by our individual biological clock). 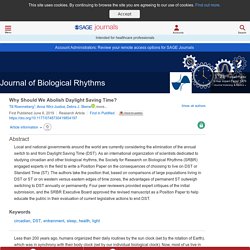 Now, most of us live in cities, work mostly in buildings, use electric light at night, and organize our daily lives by a social clock (set by human societies) that is rarely in synch with the sun clock or the body clock. These new conditions challenge our health and can cause safety problems; these challenges become even worse under Daylight Saving Time (DST). In this article, we describe how the 3 clocks came to drift apart and how that can create problems. Why is light important for our health? Living creatures have a body clock that creates daily rhythms. Why is the natural day important? The earth rotates toward the east. What is DST? Many decades ago, politicians introduced DST. How Does DST Affect Our Health? What should we do? The choice of DST is political and therefore can be changed. Crime reduction summer eves. RevDSTpaper. Battle Between Biological and Social Times.

Introduction The issue of Daylight Saving Time (DST) is an indirect consequence of dividing the surface of Earth into time zones. 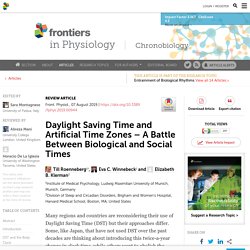 After decades of measurements, this action was taken at a conference in Washington DC in 1884 to facilitate communication and travel between places with different sun times [as exquisitely recounted in Kehlmann (2009)]. Our Earth takes (at present) 24 h for one rotation. Notably, Earth’s day was not always 24 h. When the first biological clocks developed to organize physiology on a daily level (i.e., circadian clocks), probably something like 3 billion years ago in ancestors of today’s cyanobacteria (Dvornyk et al., 2003), days on Earth were 22 h or even shorter (Williams, 2000); days have lengthened by approximately 2 ms every century since.

Perspective: Daylight Saving Time—An Advocacy for a Balanced View and against Fanning Fear. Most scientific publications do not, due to their design and statistical analysis, allow for interpretations on the “level of the individual”. 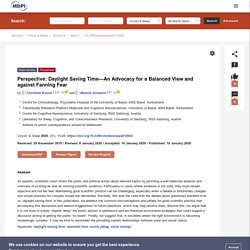 This becomes especially relevant when communicating the risks of, for example, a disease and its association with certain (risk) factors. In the DST/ST discussion one question, for example, is whether the negative effects of the transition to DST in spring on, for example, the risk of myocardial infarction, are balanced out by the positive effects that have been reported for the switch to ST in autumn [6] (note that a recent meta-analysis by [7] suggests negative effects following the transition to, but no effects out of, DST). Here, in a recent publication Roenneberg et al. [8] state that “the (negative, authors’ note [A/N]) spring and the (positive, A/N) autumn effect do not balance each other out on the individual level”. 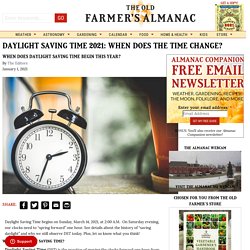 On Saturday evening, our clocks need to “spring forward” one hour. See details about the history of “saving daylight” and why we still observe DST today. Plus, let us know what you think! More States Moving to Keep Daylight Saving Time Permanent. 5 Tips to Help Your Body Adjust to the Time Change. For some of us, the clock change when Daylight Saving Time begins or ends is a minor inconvenience. 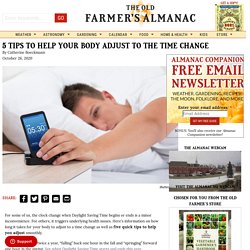 For others, it triggers underlying health issues. Here’s information on how long it takes for your body to adjust to a time change as well as five quick tips to help you adjust smoothly. 15 U.S. Code § 260a - Advancement of time or changeover dates. Amendments 2005—Subsec. 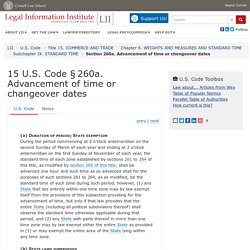 (a). Pub. To the EU Commission on DST. EU discontinues time changes. Could switching between summer and winter time end in 2021? The Transport Committee proposes that the clock change on the last Sunday in March 2021 should be the last one for EU countries that decide to permanently keep their summer time. 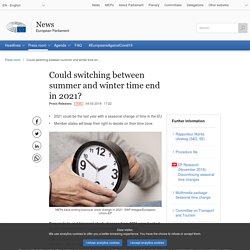 Member states that prefer to keep their standard time, also known as ‘winter time’, could change the clocks for the last time on the last Sunday in October 2021. The draft report backed, by 23 votes in favour to 11 against, a Commission proposal to end seasonal change of time, but postponed the start date from 2019 to 2021. This would not modify EU countries’ right to decide on their standard time. Protecting the single market Transport Committee MEPs also want EU countries to coordinate any changes they make with each other. Next steps. American Academy of Sleep Medicine: Eliminate daylight saving time. DARIEN, IL – Public health and safety would benefit from eliminating daylight saving time, according to a position statement from the American Academy of Sleep Medicine. 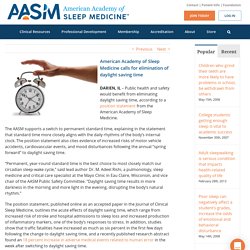 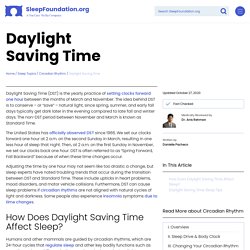 The idea behind DST is to conserve – or “save” – natural light, since spring, summer, and early fall days typically get dark later in the evening compared to late fall and winter days. The non-DST period between November and March is known as Standard Time. The United States has officially observed DST since 1966. We set our clocks forward one hour at 2 a.m. on the second Sunday in March, resulting in one less hour of sleep that night. Then, at 2 a.m. on the first Sunday in November, we set our clocks back one hour. Daylight saving time sleep health advisory. Does Daylight Saving Time Really Save Energy? View Time. Lock the clock: These states want to end daylight saving time.

In a few weeks, we’ll once again “fall back” one hour to standard time, ushering in more light in the morning and earlier darkness at night as winter nears. 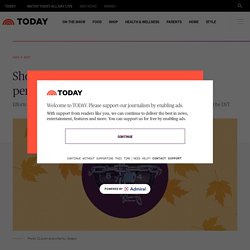 Or will we? There’s a new entry in the push to “lock the clock” — the effort to stop the country from moving in and out of daylight saving time, which is currently in place from mid-March until early November. Two U.S. senators from Florida, Marco Rubio and Rick Scott, have introduced a bill to keep DST in place through the fall of 2021, noting the nation “could use a little more sunshine” after months of staying inside amid the coronavirus crisis. PayView. Are Daylight Saving Time Changes Bad for the Brain? Daylight saving time (DST) begins on the second Sunday in March and ends on the first Sunday in November. During this period, clocks in most parts of the United States are set 1 hour ahead of standard time. First introduced in the United States in 1918 to mimic policies already being used in several European countries during World War I, DST was unpopular and abolished as a federal policy shortly after World War I ended.1 It was reinstated in 1942 during World War II but covered the entire year and was called “war time.”